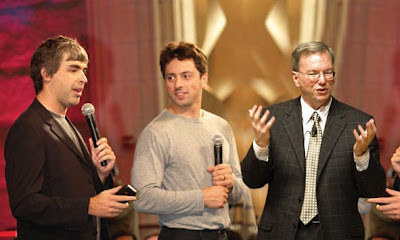 
His last part-time job was to advice Barack Obama during his campaign. His next part-time job is to advice David Cameron on how to become UK’s next Prime Minister. Between such temporary assignments, Dr. Eric Schmidt holds a regular job – Chairman & CEO of Google Inc. While screening the then 45-year old Dr. Schmidt for the Chairman’s job in 2001, founders and wonder-boys Larry Page & Sergey Brin – both not yet 28 then – are said to have expressed a unique reservation – “We need you in the future, but not now.” But encouraged by their venture capital partners, Larry & Sergey would take aboard Dr. Schmidt as Chairman of the Board of Directors. Just five months later, experiencing Dr. Schmidt’s calibre directly, Larry & Sergey would hand over the CEO post too to this IT industry veteran. Ever since then, this unlikely threesome has gelled like anything, in creating what is arguably the world’s most powerful brand, most ambitious business, and, even more importantly, a hitherto unknown corporate culture that is designed for success. This triumvirate’s synergy has amazed observers so much, with ‘PC World’ considering them as one person while naming them #1 in Web’s 50 Most Important People. The culture that they fostered in Google is something that took the company from zero to hero in less than 5 years. Within 1 year of its incorporation, Google encountered the dotcom burst. It had no revenue model then, but it survived. In 2009, they have a solid revenue model but due to its 97% reliance on routine advertising, Google is again at crossroads. Or is it? Anyway, this is also a time when Google faces some of the smartest competitors ever - ranging from groundbreaking innovators like Facebook and Twitter, to awesome communities like Wikipedia and MySpace, and of course, old giants looking at regaining lost glory through an intelligent alliance - Yahoo and Microsoft. Still, most analysts believe that Google does so many things so perfectly that they will outlive and outsmart this recession too. How Google does this should be essential feed for all companies. Seasonal Magazine brings you hot tips from this triumvirate – through the mind of Dr. Schmidt - that should help any business survive this round. He is a leader who volunteered to learn how to fly a jet, so that the mission-critical nature of leading an organization is never forgotten. He draws $1 as salary, and is one among a few non-founder, non-promoter, non-inheritor CEOs who became billionaires on stock options alone.

LESSON 7:
Going Against the Wind

Dr. Schmidt has always been amazed at how entrepreneurial brains work. Founders of organizations look at the industry structure quite differently, says this CEO. It is as though when all others look, they see a structure; and when these entrepreneurs look at the same industry, they see a radically different structure. Part of this difference is that ordinary mortals see the industry as it is, while entrepreneurs see what the industry could be in the coming years and their company’s role in it. It is a trait Larry & Sergey shares with other great founders like Bill Gates, Larry Ellison, Steve Jobs, and many others, says Dr. Schmidt. Three decades back, looking at a formidable hardware dominated industry, Bill Gates, instead of getting daunted, had the audacity to dream that software would dominate hardware in the coming years, and that his then tiny Microsoft could dominate software like no other company. Oracle’s Larry Ellison pinned all his hopes on relational databases, even when database major IBM pooh-poohed the idea. Ellison says his single-most important success trait was that he always questioned the experts. Steve Jobs dreamt of not only a superior computer, but a playful, colourful computer, when the rest 99% of the industry was dreaming in only shades of grey. For this, Jobs knew that the Apple’s working culture needs to be changed, and that is why he started wearing jeans-tees-sneakers to office, says Dr. Schmidt. Google’s history is also dotted with this kind of different thinking, of going against the wind. During 1999 and early 2000, Larry & Sergey had a splendid window-of-opportunity to opt for an IPO, by riding the unprecedented dotcom bubble. Both were in their mid-twenties, and would have ended up multibillionaires. All dotcom companies powered by VC funds were doing exactly that, and Google’s VCs too wanted Larry & Sergey to follow suit. But they resisted going public like anything, arguing that a better opportunity would come. It was incredible patience, says Dr. Schmidt, taking into account its fledgling revenue model then. And soon the bubble burst and the IPO market would not resurrect for the next 3 to 4 years. Yahoo! meanwhile offered to buy Google for a fair price of $1 billion, which Larry & Sergey turned down, by demanding an absurd price of $3 billion! But in 2004, proving their stand, these co-founders together with Chairman & CEO Dr. Schmidt would take Google public, thus giving it a valuation of $23 billion! (at current prices it is around $100 billion).

Watch This Space For The Full Cover Story. Bookmark Below.

LESSON 1:
Are Your People Knowledgeable?

LESSON 2:
Innovation is Daring to Fail

LESSON 4:
Build-it-Yourself is the Culture

LESSON 10:
Who Sets the Agenda?