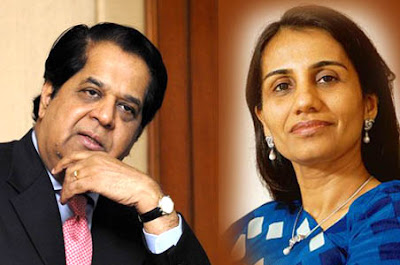 For the last 15 years, KV Kamath and his core team’s growth model at ICICI Bank was the model to emulate for all other Indian banks. But 15 years later, nobody – including ICICI - seems to be much enchanted with the model.

But after the downturn hit, have these achievements become liabilities at ICICI?

Apart from Reserve Bank of India (RBI) control, the main reason why Indian banks escaped unscathed from the global financial crisis was their limited exposure overseas. But at ICICI Bank, their significant overseas exposure continues to hurt, as the global markets are still to recover.

ICICI’s once booming credit card operation’s real edge was offering credit cards to non-customers – something most other banks were wary about, and something that ICICI Bank has drastically reduced now on hindsight wisdom. Similarly, ICICI Bank’s leadership in assets might have been aided by unsecured retail loans.

ICICI continues to suffer an image crisis from a slew of customer complaints, government actions, and court verdicts.

ICICI needs to do some serious introspection over why there is such an image crisis and whether there is something intrinsically wrong in their operation. With a home-grown CEO like Chanda Kochhar – a core member of KV Kamath’s original team – now in control, this exercise can be easier than imagined.

Such a move would complement the ICICI website’s warning link on ‘Use of Unparliamentary Language by Customers’ as well as recent litigations like suing HDFC Bank’s HR Head for an unfair dig of referring to the ‘ICICI Culture’ with disdain.

After years of maverick banking, ICICI Bank now seems more like a regular bank. ICICI has shifted loan recovery in-house, have almost stopped unsecured retail loans, have cut down on expenses, and have started attending to smaller corporates through a new vertical for the first time – all of which were standard policies at ICICI Bank’s private and public competitors for long.

From peak growth levels of around 40%, ICICI is now struggling at single digit levels, even while most others are enjoying double-digit growth. Even for the quarter ended June 30 2009, almost all core business figures were down – gross advances by 12%, total deposits by 10%, total income by 2%, and net interest income (NII) by 5%.

The only solace for ICICI was that the net profit for the quarter zoomed by 21%, but this performance being driven mainly by treasury profits and extreme cost-cutting – both of which are quite difficult to replicate in the next quarters – the outlook remains bleak.

Being a private bank, ICICI Bank’s lending rates are much above public sector banks (PSBs), but when it comes to Net Interest Margin (NIM), it is just 2.4%, below the healthy 3%.

CRISIL has recently downgraded some of ICICI Bank’s bonds to ‘negative’ from ‘stable’. It reflects poorly on ICICI Bank’s asset quality and core earnings.

There have been speculations that ICICI Bank’s massive loan restructuring has helped to better their NPA numbers. If that is true, there is no doubt it will come back to haunt ICICI soon.

Even after restructuring loans worth Rs. 1400 crore, and significant upgradation of loans, there are analysts who put the impaired loan ratio of ICICI Bank at 8.5 - 9 percent.

Whenever top ICICI Bank officials speak about no-performing assets (NPAs), they speak about provisioning for it. It remains to be seen whether the creation and subsequent management of NPAs is such a simple issue.
Posted by Seasonal Magazine at 12:53:00 PM