Why is Axis Bank a Distant Third Against ICICI & HDFC? 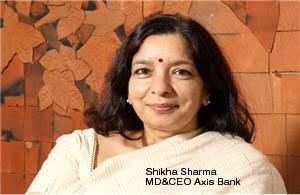 ICICI Bank, HDFC Bank, & Axis Bank started out at the same time – around 1994 – when RBI allowed private banks to be set up. While all three thrived, there is no doubt that Axis Bank (then UTI Bank) has always been the distant third.

All three banks had lots in common, like their strong parents, but while ICICI Bank and HDFC Bank moved with decisive momentum throughout these 15 years, UTI Bank even had to undergo a painful name change to Axis Bank.

Even recently, while there was smooth leadership change at both ICICI & HDFC with home-grown executives, Axis Bank had to bring in ICICI veteran Shikha Sharma for the top post.

Axis Bank needs to move much quicker with painful decisions like what ICICI Bank did with their PoS terminal division recently. After a rapid innings of growing their Point of Sale (PoS) business to 1.8 lakh terminals – the country’s largest, ICICI Bank decided to sell the entire business to First Data, citing increased pressure from shrinking margins. Axis Bank is still to take a call on this, even while having only lower margins, and a PoS business of 1.2 lakh terminals.

And even while Axis Bank finds it challenging to compete with ICICI Bank and HDFC, it is facing increased pressure from public sector banks (PSBs). PSBs are lending at 11 – 12.25%, against Axis Bank’s 12.75 – 16%.

One problem with Axis Bank seems to be its split ownership between - LIC, GIC, New India Assurance, Oriental Insurance, United Insurance, & Specified Undertaking of UTI (SUUTI). Even recently, Government had to intervene when most of the partners protested LIC’s bid to take over the stake of SUUTI.