Will India Become a Superpower? Here are 12 Hints 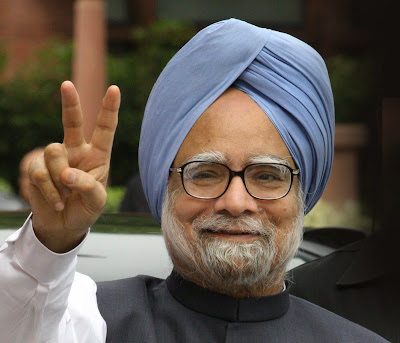 With its abysmal poverty levels, its rampant corruption, and surprisingly low per capita income, India still doesn’t come across as a superpower in the making. But a closer look at recent developments hints at several unique strengths that can offset these intrinsic disadvantages for India in the coming days.

World’s First CEO-Style Prime Minister
Who introduced professional leadership in politics? Barack Obama? Of course not. For all his NGO work, his oratory powers, and his professional education, the fact remains that Obama is a political leader and not a seasoned professional in economics or governance. He has to consult Ben Bernanke and others economists to understand the complex challenges. Contrast this with India’s once makeshift Prime Minister. He will never win a Nobel Prize for Economics, but Dr. Manmohan Singh’s Oxford education, and his professional career with UNCTAD, India’s Ministry of Foreign Trade, Ministry of Finance, and as the Governor of Reserve Bank of India, make him more than enough to understand the complex economic challenges on his own. In a world where the political challenges are all increasingly economical, that is a definite plus for India. More than that, Dr. Singh’s repeat success in 2009 has forced other political combinations like the BJP-NDA too to consider professional leadership, which is a development that can transform India into a superpower much earlier than anticipations.

Family Values Drive Savings & Entrepreneurship
Nobody knows for sure whether family as an institution will survive as long as the earth, but if it does, India will be family’s last bastion. It is not just a matter of allowing or not allowing gay and lesbian sex, but a matter of children, children’s children, and transcending one’s existence. Struggling to have children, struggling more to bring them up, and struggling even more to keep them from fighting each other like Kokilaben, and forcing them to have families of their own are all chapters of the Great Indian Story. 22 years is considered late for a girl to get engaged, even if she is Sania Mirza. Here children never grow up, at least for their parents. And reverse mortgage will never become fashionable. Here homes and houses are for keeps, for generations. How this will translate to a booming India is simple – India’s entrepreneurship and its savings culture are rooted in its family. Grandparents, uncles, or parents run joint families almost like a small business. Family is India Inc’s smallest unit. And family keeps India young. If nations like USA, UK, & Japan had once reached superpower status relying on their strong families, and started withering based on their weakening families, India has an unbeatable long-term edge in this regard.

Cricket Fosters the Competitive Spirit
Yes, it is India’s cricket. Not an Englishman’s game anymore. Don’t be fooled by Pakistan and Sri Lanka battling it out for top honors recently, while India watched on the sidelines. That is Indian complacency, Indian overconfidence. But India will rebound. If Ramayana, Mahabharata, & Gandhiji were the only things holding this diverse nation together once, today India has cricket. Whether you like it or not, Sachin and Dhoni are as revered as characters from the epics or India’s freedom struggle. And not without reason too. It was cricket that defined India’s competitive spirit. The man on the street can’t understand India’s philosophical uniqueness or the country’s software prowess. But the moment he watches Dhoni & Co playing the Australians, he realizes – India can! India’s population strength will ensure that the cricket industry will be more and more India centric, even while forcing traditional sporting giants but non-players like USA, Brazil, and the European nations to adopt the game. Cricket is something that made India shrug off its non-competitive attitude from the ancient times. Every superpower needs its brand of nationalism, and cricket is India’s version.

Passionate About Information Technology
If anybody thought India’s information technology is only about business applications programming and outsourcing, they are going to be wrong. TCS, Infosys, Wipro, and the hundreds of smaller IT companies are only part of the story. Indian engineers have a noticeable presence, if not a dominant presence in the world’s top IT products and consumer applications companies like Google, Microsoft, Yahoo, Oracle, IBM, HP, Adobe, and lots more. Imagine a scenario where India somehow taps into this talent base. That day we will wonder what we used to call IT until now. Information Technology will achieve for India what automobiles did for making USA a superpower, what electronics did for making Japan a superpower, and what military manufacturing did for making Russia a superpower.

No Enmity With Any Nation
Not exactly Gandhi’s non-violence, but India still is one of the most non-violent nations on earth. And it is a mature, seasoned non-violence. Because, India had its experiments with strategic violence, be it Bhindranwale or Prabhakaran. But India was fed up soon. Violent means to achieve anything is not just Indian. India is interested in the world, but not terribly interested in Middle East, Afghanistan, or North Korea, thereby freeing enormous energy and resources for development. Even the response to the 2008 Mumbai terrorist attacks was superb, something only India was capable of. Had India responded immaturely then, Pakistan would have been torn apart into two nations by the Taliban, which would have been an even dangerous scenario for India. India's patience with Pakistan has ultimately forced the world and Pakistan to admit its experiments with terrorism, including owning up the 2008 Mumbai terrorist attacks. The country’s eventual superpower status will be unique in that India will be the first non-violent superpower, not resorting to violent means in its past, present, or future.

Of The People, By The People, For The People
The good news is that the world’s largest democracy is working. If showing the door to the flashy types is one parameter of a vibrant democracy, Indian democracy is alive and kicking. Lalu, Mayawati, & Buddhadeb learnt it the hard way. Indian voters can’t be fooled easily. They reiterated many things that were always true. Like for example, Advani is no replacement for Vajpayee. Best performing Chief Ministers from all sides led their parties to thumping victories in the last general elections. With 33% and 50% reservation coming for women in parliament and local governments soon, India’s democracy looks just unstoppable. Isn’t it just a matter of time before the world’s largest democracy becomes one of the world’s superpowers too?

Communalism is Getting Weaker
Leaders like Gandhi and Nehru harped on about secularism with a definite agenda. Because, they were smart enough to realize that communalism is the country’s only bane. But India is finally showing definite signs of growing up on this front. The miserable failure of the Ayodhya Temple plank during the recent election is a definite sign that the people are more Indian and less Hindu or Muslim now. With one of the largest Muslim and Christian populations in absolute numbers, India’s secular credentials will only get stronger by the years. Ongoing economic development will make secularism stronger and stronger, thus taking India closer and closer to superpower status.

Not a Lawless Land Anymore
One of 2009’s most startling Indian images is of Maya Kodnani, a Gujarat Minister, getting arrested for her alleged involvement in post-Godhra communal violence. Whatever be the court verdict on her eventually, that simple act proved a profound lesson – this country which is often tarnished for its lawless pockets, is not just the same anymore. Kerala’s CPM Party Secretary Pinarayi Vijayan also learnt the bitter lesson recently, when CBI charge-sheeted him on a major corruption case. India sometimes resorts to strange tactics to ensure rule of law. Prabhakaran was wanted for killing former Prime Minister Rajiv Gandhi, and India maintained an aggressive silence when neighbor Sri Lanka finished off Prabhakaran and his LTTE systematically. A similar tactic is now pursued by US against Taliban , Al-Qaeda, and Osama bin Laden, by using Pakistan. The fact that India can decisively move against the guilty, however mighty they might be, and whether they are inside or outside the country, speaks about the country’s emerging superpower-class power.

A Talented Race
It is not just APJ Abdul Kalam, AR Rahman or Saina Nehwal. Indian talents are getting noticed in diverse fields like business, technology, governance and what not. It is a sort of coming off age for Indian talents now. Agreed, not many like Ram Charan, Indra Nooyi, Padmasree Warrior, Arun Sarin, Sanjay K Jha, or Rajiv Ouseph are working or playing for India. But the message is clear. Indians are supremely talented. If USA became a superpower by attracting talents from worldwide, India has plenty inside.

Native English Speakers, Almost
One hundred years from now, there is every reason that English will be identified with India and not England or US. With a population more than double that of English strongholds like USA, UK, Canada, & Australia combined, this should be a reasonable projection. Middleclass Indian youth are not learning English anymore; it is almost their native language. If English is the international language of business and collaboration, this poses some problems to India’s competitors like China & Brazil to be the next superpower.

Natural Aces Like the Himalayas & Coastline
The natural resources of India are still to be realized. Just two examples would suffice – the country’s long coastline and the one and only Himalayas. Today’s technology may not be enough to fully tap these resources, but a day will come when India will be looked upon as a much more resourceful country than ever thought before. And just as in the case of USA, natural resources will be an ace up India’s sleeve in the days to come. India’s possession of two-thirds of the global occurrence of thorium, the alternate nuclear fuel to uranium, is just one hint.

International Competition is More Like Tug-of-War Now
Yes, there was a time when India used to think of her children as one billion mouths to feed. Not any more. Today it is like playing tug-of-war. Each nation’s youthful working class is their team. And India has a pretty growing team. With a burgeoning working middleclass – that is larger than USA’s population - it is only a matter of time before many teams slide against India. For the second-largest population in this globe, becoming at least the second-most powerful superpower might be easier than imagined.

No other aspiring superpower has all the core drivers of a superpower – population, democracy, leadership, nationalism, talent, youth, language, and resources – as much as India has. If India takes on its triple challenges of alleviating poverty, eliminating corruption, and ensuring growth, it will enter the superpower league effortlessly.