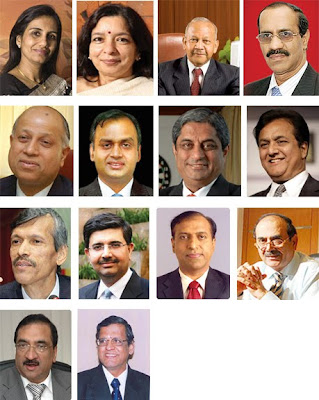 With the third quarter results pouring in, one thing is sure. The banking industry as a whole has done better than analyst expectations. But at the same time, some heavyweights are expected to fail even their targets. Seasonal Magazine brings an in-depth compilation cover story about the third-quarter results and how the projected performance will be in the fourth quarter and beyond.

ICICI BANK
When Treasury Slips, Profits Slip
Theoretically, ICICI Bank did everything perfectly. It shed almost 10,000 crores of high-cost deposits, it didn’t increase its lending mindlessly, it had a lower tax outgo, but still the country’s second-largest lender failed to register profits as treasury slipped. But all the theory is going to help sooner rather than later.

AXIS BANK
Profit & Margins Rise, But NPAs Jump Again
The third-largest private lender’s aggressive stance was not only evident in a 31% rise in net profit on strong margins, but also in its NPA levels that jumped yet again, this time by 49%.

UCO BANK
Overall Good Q3 Might Pave Way for the FPO
The overall good performance of 43% growth in net profit will now pave way for capital augmentation at UCO Bank. It has three ways before it – raising it on its own by way of Tier-1 & 2 bonds, capital infusion by the Government, or a glamorous FPO that can change its fortunes at the bourses.

IDBI BANK
Investment Income Up, NPAs & NIM Troubling
IDBI is still to get its act together it seems. The once-public now-private-sector lender had to rely on investments alone to survive the quarter, even while its NIM and NPA challenges deepen.

CORPORATION BANK
Needs Significant Capital to Grow Further
The public sector lender had a healthy though modest quarter that registered 18.92% growth in net profit, but to further kick-start growth it need to raise around Rs. 4000 crore in capital.

ALLAHABAD BANK
Treasury Losses Sink Profits
Whatever gains it had made in interest income was washed out by a major dip in treasury, and this exposed the chink in armour of this PSB. The bank’s NIM is troubling, even though it is trying to address the issue by shedding high-cost deposits.

INDIAN BANK
Interest, Expense Cuts Help Survive Treasury Dip
It seems Indian Bank had braced well for the treasury dip. It survived and posted a 26% rise in net profit, largely relying on expense cuts and a good performance on the interest income front.

VIJAYA BANK
Interest Income Up, NPAs Challenging
The STCL account continued to weigh down on Vijaya Bank numbers, even though the net interest income was up by 45%. With the treasury also dipping this time, it accounted for a net profit dip, but the bank continues to get healthier by the day.

SOUTH INDIAN BANK
Corporate Banking Up, Expenditure Weighs Down
If not for the higher expenditure, South Indian Bank would have posted a better than 15.23% growth in Q3. But with the profit for the first three quarters already surpassing last annual profit, the bank has some leeway.

INDUSIND BANK
Profits Surge on Low Base, Rising Yields Hurt
IndusInd bank is steadily playing catch-up to its bigger peers, by an overall good performance except from treasury operations. But, of course, the 95% jump in net profit was also helped by the low base effect.

YES BANK
Interest Up, Non-Interest Down, Cost Control Saves
While the young private sector lender could significantly grow its interest income and income from corporate banking, a huge dip in treasury dip weighed it down. But Yes Bank was smart enough to contain costs tight this time around.

KOTAK MAHINDRA BANK
Interest Static, Treasury Jumps, NPAs Worrying
Kotak Mahindra’s was the contrarian play of Q3. While most banks were hit by a dip in treasury and boost in interest income, this NBFC turned bank experienced almost stagnant growth in interest income and a surge in treasury. But the bank’s NPAs continue to trouble.

DHANALAKSHMI BANK
Shocking Expenditure Melts Profits
This once-traditional private sector bank could increase its income for the third quarter from 124 crore to 156 crore YoY. But this now-new-gen bank almost doubled its expenses from 29.20 crore to 53 crore, thereby melting away whatever profits were possible. The culprit was the expansion program that added expenses by way of new branches, ATMs, and employees. However, the expansion was long-pending and the bourses too had taken kindly to the results.
Posted by Seasonal Magazine at 11:05:00 AM