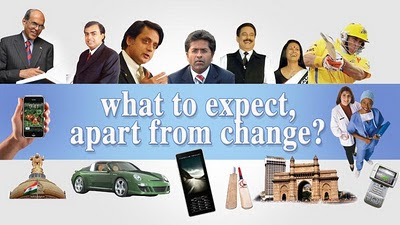 Electric cars, green energy, smarter smart phones, hotter social networking, the emergence of Sports Inc. – the changes awaiting us in this financial year are diverse and deep. Are we really ready?

Are we entering another such rapid change zone, after months or even years of lull?

Otherwise, who would have thought Shashi Tharoor would get so proactive to bless an unlikely mix of crickpreneurs to bring an IPL team to his state? Mind you, the money committed for winning the Kochi bid is four times want Mukesh Ambani paid for Mumbai Indians. But this unlikely mix called Rendezvous Sports World Ltd, continues to surprise many as its lead promoters Shailendra Gaikwad and Vivek Venugopal, though of respectable business families, are highly unlikely to do it on their own or with a couple of similar-profile investors.

Gossips doing the rounds are 1) Gaikwad is ‘supported’ by a high profile Mumbai cricketer who is a close friend of his, and 2) a UAE prince who now owns Manchester United is the real source of the money. The fact that Tharoor was Chairman of a UAE based company for a while, and the hints that Lalit Modi had dropped about the UAE Sheikh lend some credence to the gossip. Anyway, it goes to Tharoor’s credit that he changed from a long-term cricket enthusiast on paper, to a cricket enthusiast on pitch.

Anyone can be taken by surprise. Dinesh Karthik was surprised at how the Mongoose launched 7 sixes and 9 fours from Hayden to demolish them. The US Markets were caught on the wrong-foot by Duvvuri Subbarao’s surprise squeeze. Anyway, the RBI Governor is expected to protect only the Indian markets – which he did – and not the US one. The fact that he wields power to upset US markets, however, is another change.

Many consider it as the height of irony – or change – that Marylebone Cricket Club could agree to the suggestion from IPL and Mongoose to approve the rowing-pad-like bat as legal. Lalit Modi’s moneymaking machine is considered the antithesis of the much venerated MCC, still the rule maker in international cricket. Times are changing; even they can come together.

The new problem with change is that it is more unpredictable than ever. Following stock market pundits, many were waiting for the 9th month from March 2009 to re-enter positions. But this time market rebounded within three to six months.

Even while our parliament passed the Women’s Reservation Bill after much antics, an even bigger problem with women’s changing roles is lurking in our households. The problem – of wives earning much more than husbands - has already escalated to a significant size in Western countries and our guess is that Indian metros are no different.

When it comes to gadgets and technology, the pace of change can really burn hands. By the time you come into grips with touchscreen phones, they will change to touch-less screens. Even tech giants like Google are stunned by tech growth these days – this was the week when Facebook finally overtook Google in page views for a brief period in US, according to some metrics. Active social networking is even hotter than passive pleasures like TV or mobile chat for today’s youth.

But companies like Google are trying their bet elsewhere. They are pushing products like Google Maps in countries like India. Not to be outdone, Nokia is offering their maps software for Indians free of cost, with a lifetime guarantee that it will remain free. Other tech changes that we highlight in this issue include the coming of pervasive mobile video and the advent of mind reading computers.

Design, branding, and innovation are also coming together like never before to create a marketing edge. The latest example is the Porsche Design Mobile Phone, which even while costing around Rs. 85,000, is only available for Porsche car owners.

2010’s biggest change, however, would be something that will happen on Western roads. At least three electric cars will roll out of production lines in huge numbers. Electricity authorities there are running for cover as these cars would take up roughly the same electricity as a standard household with basic appliances. Experts are already predicting windfall years for wind-energy makers, as the electric cars’ night-time recharging is ideally suited for wind energy’s biggest curse – severe under utilization while we all sleep.

Petroleum maker Mukesh Ambani is also running for cover. While his retail forays made him look vulnerable, his newfound interest in the sports management business can again make him the darling of investors. After a lacklustre bonus issue and failed attempts to take over international companies rattled his share prices, the partnership with IMG is showing signs of taking the scrip northwards.

Some analysts are already predicting that Sports Inc is all set to follow Telecom Inc and IT Inc, in this country. Reliance is not alone in this, as many corporates like Mahindras are already there and niche players like Shirke Infrastructure is trying to carve their own space here.

Another change driving Sports Inc is the sponsorship industry’s growth rate. At 12.6% annual worldwide growth, sponsorship is the fastest growing marketing tool, ahead of 3.9% for advertising and 4% for sales promotion.

IPL, of course, provides the best example. This year, sponsorship revenues for each franchisee is expected to double from Rs. 24 crore to Rs. 40 crore, with IPL’s current brand value estimated at Rs. 19,000 crore.

No wonder, at least a couple of IPL franchisees are expected to announce IPO plans shortly. In some ways the high-risk but high-yield Mongoose bat symbolizes the mood of IPL as well as the country’s Sports Inc.
Posted by Seasonal Magazine at 4:24:00 PM