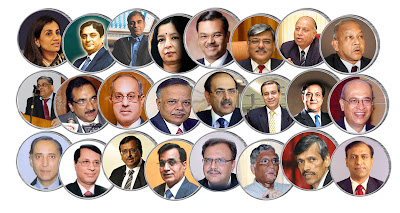 When the fourth quarter results from private and state-promoted banks of India started pouring in, everything seemed to look up. But on a closer analysis and with more results coming in, the overall picture is not so rosy. It is a mix of under performance, reasonable performance, and rare instances of over performance. While some underperformers hid behind improvement in core numbers like Net Interest Income (NII) or total revenue, some others had to present an overall bleak picture. The overall theme running around this time is that only a few banks were able to survive the double-whammy of lower treasury returns and higher provision coverage ratio (PCR). But for investors in the Indian stock markets, who are looking upon the country’s banking sector as perhaps the highest-rated long-term value play, the results came as not much encouraging. Again, it is a case fit for bank-by-bank analysis. Here is the actual picture of the first 24 publicly-listed Indian banks whose results are out. Coverage includes ICICI Bank, HDFC Bank, Central Bank Of India, Axis Bank, Bank Of Baroda, Canara Bank, Corporation Bank, IDBI Bank, Indian Bank, UCO Bank, IndusInd Bank, ING Vysya Bank, Yes Bank, United Bank Of India, Oriental Bank Of Commerce, Indian Overseas Bank, Syndicate Bank, Allahabad Bank, Andhra Bank, Dena Bank, IFCI, Bank Of Maharashtra, Vijaya Bank, and South Indian Bank.
ICICI BANK: (BSE: 532174 | NSE: ICICIBANK)
Seems to be back in the reckoning. YoY jump is on low base, but the steady sequential growth hints at again being the heavyweight it once was. No wonder even RBI is encouraging with more time for attaining 70% PCR. But with 67% foreign ownership, and the bank existing as ‘Indian’ only on a proposed RBI exemption, it needs to tread carefully during these times when capital markets worldwide are holding their breath on Goldman Sachs.

HDFC BANK: (BSE: 500180 | NSE: HDFCBANK)
Is it time to expect lesser here? The YoY jump is impressive as it is not on a much low base, but the sequential jumps are getting smaller. Still, can’t complain. But with parent HDFC Ltd as well as offspring HDFC Bank having majority foreign ownership – with a whopping 73% foreign ownership in HDFC Bank, and it existing as ‘Indian’ only on a proposed RBI exemption, it needs to move carefully during these times when financial markets worldwide are holding their breath on Greece, Spain & Euro.

CENTRAL BANK OF INDIA: (BSE: 532885 | NSE: CENTRALBK)
The March quarter is again proving to be problematic here. Despite Q4 profits jumping almost three-fold YoY, nobody here is claiming victory, as it is almost solely due to the low base. The quarter ending March has again come to haunt here, with a serious sequential dip from the excellent performance of the last two consecutive quarters.

AXIS BANK: (BSE: 532215 NSE: AXISBANK)
Finally, indications of Moving Into its True League are visible here. The convincing Q4 numbers, both sequentially and YoY, point to catching up with ICICI & HDFC, and there are no signs of fatigue here.

BANK OF BARODA: (BSE: 532134 | NSE: BANKBARODA)
Q4 net jumps YoY, further reversing the downtrend in the first and second quarters. More than makes up for the lost time.

CANARA BANK: (BSE: 532483 | NSE: CANBK)
Here the quarterly moves continue to be unpredictable. Q4 dips drastically both YoY and sequential, and is almost the worst performance in two years.

CORPORATION BANK: (BSE: 532179 | NSE: CORPBANK)
Continues to be both steady and slow. The YoY jump is impressive here, and that is not just by the low base, but still the sequential pace still has much room for improvement. Otherwise, a reversal in fortune can happen in the coming quarters.

IDBI BANK: (BSE: 500116 | NSE: IDBI)
Here, it is a definite comeback, but there are still miles to go. Sequential results jump, but not enough to jump much above the corresponding Q4.

INDIAN BANK: (BSE: 532814 | NSE: INDIANB)
Growing still, but the growth seems to be slowing down. A healthy performance, but YoY has barely grown, while sequential net profit drops after two straight quarters of growth.

UCO BANK: (BSE: 532505 | NSE: UCOBANK)
Q4 net has surged by 269%, but that can be explained away on the low base. What is surprising is the steady sequential growth exhibited throughout FY’ 2010, which has now culminated in an almost historical high – at least since 2002 – quarterly performance, in absolute numbers.

INDUSIND BANK: (BSE: 532187 | NSE: INDUSINDBK)
Growing, but the need for a shift to overdrive is evident. After years of lull, growth is here both YoY and sequentially, but it is the predictable, unexciting kind of growth, with the risk of another slowdown.

ING VYSYA BANK: (BSE: 531807 | NSE: INGVYSYABK)
Here, there is a chance for a breakout from the usual pattern. The YoY jump of Q4 is impressive, but the more important question is whether the breakout seen from the last five quarters’ seesawing of dips and recoveries will gain strength. It should, hopefully, taking into account the higher highs seen sequentially.

YES BANK: (BSE: 532648 | NSE: YESBANK)
The efforts to move into the big league is evident. Q4 further proves that the profit growth march here goes ahead undeterred, both sequentially and YoY.

UNITED BANK OF INDIA: (BSE: 533171 | NSE: UNITEDBNK)
The performance seemed to be distracted by the IPO. After a robust IPO, this kind of results – a 65% YoY plunge - is unpardonable. It seems that while the bank was immersed in the IPO business, dangers like higher provisioning and lower treasury crept in. Seriously needs to get it act together, before the market corrects the scrip with a possible over-reaction.

ORIENTAL BANK OF COMMERCE: (BSE: 500315 | NSE: ORIENTBANK)
The YoY jump is due to the low base, but sequentially this is going northwards. Overall, a convincing performance.

SYNDICATE BANK: (BSE: 532276 | NSE: SYNDIBANK)
Previous Quarters Save the Show here. Despite fourth quarter dipping drastically here – both sequentially as well as YoY – the overall picture is not so bleak, thanks to the good to moderate results of the first three quarters. Still, the quarterly seesawing of dips and recoveries should stop.

ANDHRA BANK: (BSE: 532418 | NSE: ANDHRABANK)
Seems to be encountering a Reversal in Fortune. Q4 net jumps YoY, but the deceleration of the previous quarters seems to be turning into a reversal, with the sequential dip.

DENA BANK: (BSE: 532121 | NSE: DENABANK)
Repeats a predictable and steady performance. No big upmoves here, but all the moves – both sequential & YoY – are northwards.

IFCI: (BSE: 500106 | NSE: IFCI)
At first looks, the quarterly growth – both sequential and YoY - is impressive here, but the important question is whether net profit’s breakout from the 100s to the 200s will also prove to be a breakout from the last six quarters’ seesawing of dips and recoveries, to head on to pre-2008 glory when net played in the 600s.

BANK OF MAHARASHTRA: (BSE: 532525 | NSE: MAHABANK)
The YoY jump in net profit is insignificant at 1%, but this quarter marks a back-to-healthy step, as it further reinforces the turnaround that started in the December 09 quarter, after two consecutive quarters of poor performance. Still, a long way to go.

VIJAYA BANK: (BSE: 532401 | NSE: VIJAYABANK)
Here we find growth, but that needs to be steadied. Q4 net up both sequentially and YoY, but the sequentially alternating dips need to be convincingly eliminated.

SOUTH INDIAN BANK: (BSE: 532218 | NSE: SOUTHBANK)
Something went seriously wrong here. All that new costly image-building exercises and now the worst performing quarter in 2½ years. With a sequential drop of 38.20% and a YoY drop of 23%, nobody except the management knows what went wrong here. The market has already started on a severe correction on the scrip, which is expected to gather momentum unless a comprehensive explanation is delivered.
Posted by Seasonal Magazine at 12:54:00 PM