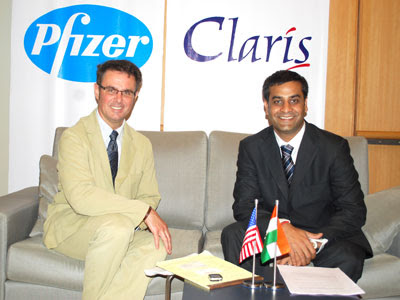 The IPO of Claris Lifesciences Ltd, a 10-year old Indian pharma company, which opened for subscription on November 24th is sure to attract eyeballs in the market, due to pharma sector’s outperformance as well as the niche segment of generic injectables that Claris specializes in.

Whether this will translate to actual investor interest is the million dollar question before the company as well as its prospective investors.

Claris seemed to have made all the right connections for a 10-year old pharma company based out of Ahmedabad - its products are sold in 76 countries, it has an international marketing tie-up with pharma giant Pfizer, and it is backed by PE major Carlyle.

But then the Handa family to which Arjun S Handa, Promoter, Managing Director, & CEO of Claris belongs to, is no new group to the pharma sector. Arjun’s father, Sushil Kumar Handa was a pharma pioneer and promoter of Core Parenterals Ltd, later renamed Core Healthcare Ltd (CHL), and which was a successful listed company for some years (BSE: 500091, NSE: COREPARENT).

But then misfortune struck the firm’s operations and CHL became a loan defaulter to many banks and there were also multiple cases made against Sushil Handa by CBI and Gujarat Police, as well as securities authorities like SEBI, NSDL, CDSL, BSE, NSE etc. However, some of these cases have been since closed.

But ever since the new company was promoted as Oracle Laboratories Ltd and the reins came into the hands of Arjun S Handa, it has been a long stint of uninterrupted growth, expansion, and profitability at Claris Lifesciences.

Today, with 113 products across multiple international markets and therapeutic areas, Claris is a country leader in its pharma segment of sterile injectables.

The comparable and best example from India’s listed space would be Strides Arcolab (BSE: 532531 / STRIDES, NSE: STAR), which has an industry-leading year-to-date price performance of over 125% even after the recent falls in the market. Strides trades at an unbelievable TTM P/E of over 93, but is still regarded as a growth stock.

Compared to Strides Arcolab, the offer P/E of Claris Lifesciences will work out to only 14, and this should be a major attraction to this IPO. However, it should be noted that though Strides Arcolab is comparable to Claris in revenue, as well as a leader in sterile injectables, Strides is also a leader in soft gelatin capsules.

Still, Claris Lifesciences IPO should be mentioned as reasonably priced, as the pharma industry average P/E is in mid 20s. What this means is that Claris can move up significantly in the medium to long-term, may be even by 50% from the IPO price, if its valuations catch up to even the industry average.

But even if it fails to be so, earnings expansion can drive the scrip forward, as Claris has demonstrated between 2005 and 2009 that it can grow at a CAGR of over 25% and deliver an EBITDA margin of over 30%. This should make the short-term quarter-to-quarter prospects also attractive for investors.

The company is planning a Rs. 250 crore capex using the IPO proceeds, and Rs. 46 crore from the remaining will go for repaying debt.

However, a recent FDA ban on certain Claris products marketed by Pfizer in US, may weigh down on the stock temporarily. Its long-term impact remain to be assessed.

Taking into consideration all the above factors, especially its tie-up with Pfizer, investment by Carlyle, its wide product range across 76 countries, and its demonstrated growth curve during the last several years, as well as the attractive offer valuations vis-à-vis competitors, Claris Lifesciences can be considered as a reasonable buy for investors.

The Issue has roped in anchor investors, with their portion of Rs. 54 crore fully covered at the upper edge of the price band of Rs. 278 to Rs. 293.