IPL - What are the Chances for Each Team? 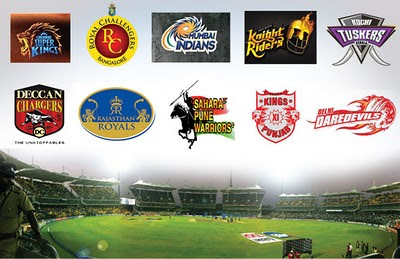 
Can we take a breather? The just concluded ICC Cricket World Cup has certainly lived up to it’s name as a  high-voltage and heart-pumping tourney and the entire cricket congress is still to awaken from it’s euphoria. Now with the commencement of the Great Indian Premier League, not many will regain their senses in time, as the cricketing spectacle kicks off  within a few days time. The extravaganza has assured those lazy bones, curled around on their sofas, of non-stop cricketing masti. If the world cup is the role model in the cricketing stage, then the IPL is the mischievous model. IPL is more than just cricket which makes it closely followed by different masses with rapt attention. The new edition involves two more teams making it, surely, a more keenly contested affair. It’s all about power-hitting, close-shaves and cheer girls, thereby creating an atmosphere of tension and glamour and also a peppery one at that. Here is a look-out on the teams that would be fighting to achieve 20-20 triumph with minimal effort and maximum sixers.
Chennai Super Kings:

They are undoubtedly the best performing team so far in the three editions. Captained by a World-Cup winning skipper in Mahendra Singh Dhoni, the team by now has achieved two major titles, including the Champions League winners and not to forget their IPL-3 victors tag. During the auction, the franchisee made sure that they went with the same combination as in the previous editions by claiming successful bids, except losing out a key player in Muralitharan. They are the only team to feature in two IPL finals and there’s nothing to be surprised if they go on to book another final berth. Players to watch out for are MS Dhoni and Michael Hussey.

A disastrous campaign in IPL-1 shocked many as they were tipped as favourites to grab hold of the trophy, but made a rousing fight-back in the next edtion, unfortunately losing out to Deccan Chargers in the final. RCB is a team that showed a  gradual and consistent change over the years. Their buys have been spot-on and indicates their quest for a trophy-winning team, something that has hampered their chances before. With Kumble opting out of this year’s IPL, the captaincy role may be taken up by former DD player, Daniel Vettori. On paper, they look a fabulous team but one will have to wait and watch whether they are able to utilize their resources into gains. Players to watch out for include Virat Kohli and Dirk Nannes.

The team has befittingly retained four of it’s superstars for this year’s IPL. Sachin Tendulkar, Zaheer Khan, Lasith Malinga and  Kieron Pollard were instrumental in Mumbai Indians’ successful IPL campaign over the past years. Tipped as the heavyweights, the only blot on this team is their inability to live up to the expectations, and is easily bogged down by nerve-wrecking matches. They were finalists in the previous editon and can be slated as the South Africa of IPL - they choke to death rather meekly. But, the sheer presence of Tendullkar gives them an upper hand over the other outfits. Players to watch out for are Sachin Tendulkar and Lasith Malinga.

Of the 8 teams that participated over the three IPL editions, KKR is the only team that is yet to enter the semi-final stages. Easily the strongest team, KKR will want to get past that dubious record and establish their supremacy. Inconsistency has had the better of them time and again but the team sports a new look with the purchase of Indian batting star, Gautam Gambhir, and numerous other big names. They came agonizingly close to qualify last year but lady luck didn’t shower her blessings upon them. KKR have in their ranks the very best players and the fans would be hoping that their team makes the cut when this year’s IPL commences. Players to watch out for include Eoin Morgan and Ryan ten Doeschate.

This new born baby has seen it all. From the time the team took shape, they have gone through difficult periods, faced severe allegations and possibilities of  axing loomed large. But, the prayers and support of their fans helped the team to regain foundation and confidence and the team will want to give back something to cheer for their well-wishers. Many pundits feel that KTK is the most balanced team having a blend of both senior pros and fresh legs. The team’s base is at the Jawaharlal Nehru Stadium where they are slated to face-off with the Royal Challengers of Bangalore on the 9th of April. Mahela Jayawardena is unquestionably KTK’s man of the moment after his breath-taking batting in the final of the World Cup and justifiably the skipper of the Kochi outfit. They would want to pose a serious threat on all title-contenders and the intensity they have shown during their practice sessions clearly indicates their hunger for success. Players to watch out for are Muttiah Muralitharan and Brendan McCullum.

Come April 8th and the Deccan Chargers will be all charged up. Their debut season not withstanding, the Chargers since then have proved a point that they are no pushovers. Finishing in the last position a year and going on to win the following years title just stands to show their fighting spirit and never-say-die attitude. The team will sorely miss the expertise of  seasoned campaigner, Adam Gilchrist, who single-handedly took them to the top. However, the team can brag about having a solid, thinking and classy captain in Kumara Sangakkara, who led his national team to the World Cup final. Fitness of Kevin Pietersen is a worry but they have the players to cover up such risks. Players to watch out for include are Dale Steyn and JP Duminy.

If the RCB has improved steadily over the years, the performance of RR has decelerated to an extent where even the great Shane Warne is unable to save the blushes. They are well remembered for lifting the inaugural edition of the Indian Premier League but since then they haven’t played to their full potential . They  have roped in a few names but it remains to be seen whether they can achieve the impossible. Players to watch out for are Shane Watson and Ross Taylor.

One of the two new entrants into the IPL sphere, SPW have in their midst a team that can go all the way. Captained by an in-form and boisterous Yuvraj Singh, who won the Player of the Tournament in the just-concluded WC, the team will seek to start off on a positive note and sent shivers down the spines of  their competitors. Owned by the Sahara Group of Companies, SPW will play their home matches at the DY Patil Stadium ground located at Navi Mumbai as the MCA Stadium is still under Construction. The Warriors play their first match in the IPL (2011) against the Kings XI Punjab at Navi Mumbai on the 10th of April 2011. Players to watch out for include Yuvraj Singh and Callum Ferguson.

They can be clubbed along with the RR as the Punjabi boys too have found the going tough. In the first Edition, they did well under the leadership of Yuvraj Singh, reaching the semi-final and a rollicking group stage performance. Sangakkara took over the reigns the following year after Yuvraj was stripped off captaincy. But Sanga couldn’t lead the team to further triumph and Punjab finished rock bottom in the league standings last year winning just a couple of matches. Addition of Gilchrist has boosted their chances with the Australian having previously led the Deccan Chargers to IPL victory. Players to watch out for are David Hussey and Ryan Harris.

Unmistakably, Delhi has the least fancied players in the squad. Previously they had the likes of Villiers, Dilshan etc but the auction meant they would lose out on many of their stars. Their best buy seems to be Wayne Parnell but that too isn’t something to boast about for a team that had the likes of McGrath, Dirk Nannes etc. Possibly, DD may find the going tough this year as many felt that they were the worst prepared for the auctions. Loosing a player of the caliber of Gambhir may hurt them but the management has made a sensible choice by retaining explosive Indian opener, Virender Sehwag. They made it to the semis on two occasions but their lacklustre performance in the big games dashed their hopes  of making into the final. Players to watch out for include Colin Ingram and Virender Sehwag.
Posted by Seasonal Magazine at 4:51:00 PM