Clash with the Caribbean Calypsos 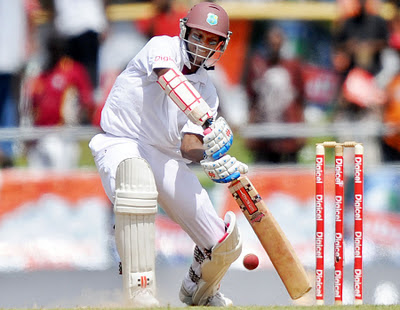 The West Indies team, over the years, has always sprung a surprise no matter where they have been playing their cricket. The energy within the team is immense and there is that extra bit of excitement among the Windies youngsters which could be attributed to their care-free and enjoyable lifestyle back home. The Caribbean unit can be as drab as on a given day or may be potent threats on their day. There’s always something sinister about playing the West Indies. Maybe it’s got to do with the uncertainty element that has always rested upon every Windies team over the years. They are surely the dark-horses in the cricketing world with their subtle, home-bred techniques mixed with their casual conduct and never-say-die attitude which undoubtedly makes them a lethal force to deal with. The spark of joy on their faces with every run scored by their colleagues, the non-stop chattering on the field to pep up their bowling unit backed up by their impressive fielding ability brings in the entertainment factor into this series. The one cricketing shot that is embedded in each West Indian batsman is the gorgeous ‘Caribbean flick off the hips’. The bowling department also has clichés of their own - the ‘Caribbean style of celebration’ at the fall of every wicket. All in all, the islanders are a surprise package with loads of  ammunition in their stores and India must be mentally better-off  to intimidate their counterpart..

West Indies wouldn’t be alien to the conditions at Kotla. They come into this series on the backdrop of a successful tour in Bangladesh, where they came into terms with the slow and low behaviour of the wickets. Their batting order dons a different look unlike the Windies team of the past which literally vanquished every opposition on the planet. The injury to Lendl Simmons has opened the doors for another youngster by the name Adrian Bharath, who shot to fame with a credible ton against the Aussies but has since then dipped in form and performance. Kirk Edwards has been a revelation to this side that was badly in need of a youngster coming up with a stellar batting display which he did against the hapless Bangladeshis. Darren Bravo has lived up to his credentials with many terming him as the ‘next Brian Lara for West Indies’ as he stroked through to a majestic 195 in their recent tour against Bangladesh. Shivarine Chanderpaul averages 67.71 against the Indians(so he would surely enjoy the spicy Indian dishes!) and his role in the Windies scheme of things is incontrovertible. He’s been the batting mainstay for the islanders and the fresh faces in the team will seek to bat around this experienced campaigner.  The young Kraigg Brathwaite had a spectacular U-19 Quadrangular Tournament where he notched up 2 centuries and led the Windies to a  third place finish. He may as well fancy his chances of opening the batting alongside team-mate Keiron Powell. Marlon Samuels is a batting powerhouse and can demoralize the opposition’s bowling attack with his hard-hitting stroke-play  and he is more than a handy part-timer with the ball proving to be a partnership-breaker. It seems Darren Sammy, the West Indian skipper, is the one who needs to pull up his socks and put forth an all-round performance and lead the team by example. His bowling looks satisfactory but his batting requires tonnes of improvement and skill. The young leggie Devendra Bishoo can match the best in business on this trade with his variety leg-spinners and remarkable patience and can even puzzle the Indian batsmen who are relatively better players of spin. Fidel Edwards is a skiddy customer and his recent good performances will be in good stead for himself and the team. Ravi Rampaul has shouldered the responsibility of the pace attack with considerable ease without having been over-burdened with the job in hand. The treatment handed towards Kemar Roach,who can consistently clock the 140’s, is a bit of a concern as the talented fast bowler has been in and out of this test side since a spectacular debut season. Denesh Ramdin and Carlton Baugh are the two wicket-keepers that the team has in their ranks.

The Indians, on the other hand, are an elated unit after brown-washing the Englishmen in the recent ODI series. The youngsters who were ‘warming the benches’ over the years have showcased their true worth and potential and this has led to the inclusion of Varun Aaron, Umesh Yadav, Rahul Sharma and Virat Kohli in the test squad. Thankfully, the Indian selectors have finally realized the need for saplings to sprout into matured plants by nurturing them with care in all stages of their career until they can stand on their own roots. Aaron has been a terrific find for India as he can work up good pace and possesses the ability to reverse swing the ball and that too at bombarding speed and accuracy. Umesh too was impressive in the recent thrashing of England and this youngster has all the makings of a fine bowler with his burly physique, steady run-up and outstanding follow-through. Rahul Sharma is yet to don the Indian colors but everyone is aware of what this leggie has to offer - his lanky mould and escalading height makes him a tough spinner to counter alongside his ability to extract bounce on any turf wicket for that matter. Accuracy and temperament is in favour of this young lad and it won’t be too long before he finds a place in the playing X1. Virat Kohli’s rise to fame is indeed a fairytale story. The young Delhiite is in fabulous form and he would want to replicate his brilliant performances in the longest format of the game. Ishant Sharma is slated to lead the young bowling brigade and the towering pacer will hope to repeat his performance in the Caribbean, where he picked up 22 wickets in the 3 test matches. There is no variation that he doesn’t possess. Right from the conventional off-spinner to the unconventional carom-ball, Ravichandran Ashwin is a utility bowler in this Indian side. He has the uncanny knack of making vital breakthroughs in crucial junctures during the opposition’s batting innings. Pragyan Ojha’s return to the Indian side after a gap of one year, seems more like a return from exile as one wonders as to how he was dropped in the first place. The crafty left-arm spinner still has the ability to bamboozle the best of batsman and it remains to be seen if Dhoni will stick with this promising tweaker.

The remaining composition of the team is similar to the one that played the first test back in England this year and with the injuries having been shredded for good, India’s batting order looks indomitable as ever. One must be hoping and praying that the injury demon doesn’t return to haunt the home side after the debacle back in England where India lost more than half it’s side due to freak accidents leading to serious injuries. Only Rahul Dravid had looked in great knick with the other superstars coming up with shoddy returns. The ‘Wall’ will once again look to stabilize and resurrect the innings in case India’s famous batting collapses looms large. Sachin Tendulkar is on the verge of a personal milestone of 100th century in the gentleman’s game but the batting maestro will only look to take things as it comes and wouldn’t fret much over the landmark. His performances in this series will be key to India’s success. VVS Laxman is and will always remain India’s crisis man but long innings have been evading him for quite some time now so the Hyderabadi man would love to put up a outstanding show against the Windies. Yuvraj Singh, India’s boy wonder, is determined to perform well in the test format, something that has been a missing link in a rather illustrious career. His batting prowess can’t be questioned but with the likes of Virat Kohli performing the way he is, Yuvi’s place in the playing squad may be in jeopardy as there is every likelihood that Virat may get the nod ahead of one of India’s finest talents. MS Dhoni is yet to be dismissed in his last 7 outings (he was run-out in the T20 encounter against England) and he will extend that confidence into this series. Dhoni has seen himself bag numerous man-of-the-series awards in the limited format but the Indian captain is yet to play the long innings partly due to the fact that he comes lower down the order. Against a relatively weak bowling unit, Dhoni will seek to write off his critics by putting up a stellar show as a batsman and as a wicket-keeper. Gambhir-Sehwag combo is expected to give India those typical flying starts to the innings, with the first test in their very own ground. Gambhir will look to play the anchor’s role while India will hope Sehwag provides them with blistering starts.

The series doesn’t promise to be a mouth-watering clash nor will it rake in TV ratings and viewership but it can be seen as a tour that will enable India to experiment with fresh legs. The prospective highlights of this series would be Sachin Tendulkar’s milestone of milestones, decent performance by India’s youngsters and not to forget Bishoo’s role in the series script. On paper, India clearly looks the better team with their batting unit far mightier than the West Indies by miles, leaps and bounds, but on the bowling front, West Indies have their nose ahead by a whisker. India has every chance of coasting to a series whitewash but the West Indies is sure to fight hard and relinquish their ‘under-dogs’ tag, so India will have their task cut out. So, let the Calypso music begin!