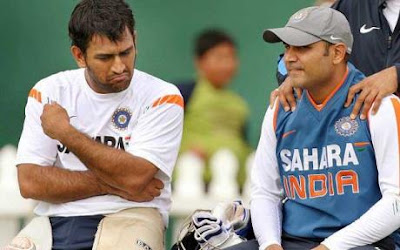 
“When you die, you die. You don’t see which is the better way to die,” remarked MS Dhoni when the Indian captain was quizzed on whether a series whitewash in hands of the Aussies is more dis-heartening than the one England handed out to the men-in-blue. Correction: The Men in Whites. The aforementioned tag’s cousin, the blue brigade, have showcased undeterred fighting spirit and a will to succeed whereas the “men in whites” have been  excessively whitewashed to the extent that they will remain white throughout their playing-span unless a change-over of sorts is on the cards. Forget about the washing and whitening, India have not even bothered to play fighting cricket, probably because they fear their whites would be soiled. It is hard to discontinue the use of “white” simply because India have wilted meekly to their counterparts, who too are in whites.

The core problem with the team stretches far beyond colours, hues and cricketing jargons. When a Jharkhand lad took control of the reins of  the Indian cricket team, none would have imagined in their wildest of dreams that the lad would take India to greater heights and scale greater barriers. He marshalled his troops with authority and his silent demeanour created a pulse of  fascination among the cricketing fraternity. He embattled India’s cricketing woes at a time when the greats of the game like the Kumbles and Gangulys called it a day and steered the cash-rich unit to an all-time high which included victories in South Africa, New Zealand and the Caribbean. Not to forget the World Cup triumph and the gradual ascension to the top rung in the Test table. MSD has played his part in the drama to good effect. He has raked in unimaginable sums of money and support through his glamour quotient and the investment opportunity in him that was identified by the branding world. He has been the recipient of numerous awards and his typical Indian way of speaking English during press meets have caught the eye of Forbes Magazine, which has listed Dhoni’s way of speaking  in the group, “5 things which you shouldn’t do” Yet, it is surprising that a man of his credentials and leadership qualities have few foes in near visibility or is it that we fail to notice the ones who eagerly await his downfall?
Dhoni will certainly be hated by the Aussie outfit given that he led India to his team’s victory over the Aussies that arrested the Australian juggernaut in World Cups. Michael Clarke would be on cloud nine as it is very rare to witness a situation where Dhoni comes under scrutiny due to his captaincy-flaws when the media heaps praise on the former’s game plan and leadership qualities. Some of the Australians express high regards and respect for the current Indian team while there are others who simply taunt the skins out of the “respected unit”. Double standards of Aussies are exposed. The Indian team - better put, men in whites - doesn’t’ seem to realize this. While we rest on our past laurels and achievements, our rivals strategize and plan for their future course of action. While we stick to playing in high-liquidity tourneys like the IPL, our rivals stick to their national commitments. While we address critical issues of failures by taking a break off the game (remember go-karting?), our rivals sweat it out in the nets by being always involved with the game. While we anxiously await a century from the Master’s blade, our rivals have garnered century after century to make our wait pointless.
While Ponting’s  present image as an Aussie player (not captain anymore) has earned him accolades and surprising respect, it remains to be seen whether our big daddies will relish facing the situation Ponting is in. While we have used our fingers to little effect, our rivals have used their grey cells to good effect. While we have a Board that itself believes it is the world, our rivals have a Board that appreciates efforts when it is to be appreciated and corrects flaws when it is to be corrected. Our Board, rather the “know-it-all” Board, believes in applauding player’s strengths, while their weaknesses are made to look irrelevant. Now that is dangerous in itself. While our media supplies news of the successes of  the home team more than the magnanimity of their failures, our rival media criticizes our own team of  internal team disputes and provides unfettered support to their own national team. It is a shame that our media hasn’t been able to adopt such an aggressive tactic. The Aussie media is often referred to as the “12th man of the team”. MSD blurts out an untimely suggestion of him retiring from one of the formats in order to divert the media’s attention from the pathetic display of his team. In fact his suggestion looks far more pathetic. However a portion of his suggestion has been realized. Dhoni has been handed a one-match test ban for slow over-rate. However it is hard to conclude whether MSD will be weeping over the lost opportunity to relive himself or whether he would be more than relieved and content to be handed out the ban. Relinquishing power is not easy if not impossible. Holding onto the throne, along with which comes power, is something that Indians cherish both in the sporting and political domain.

The reins have been passed onto an almost misfit. Virender Sehwag is no captaincy-material. Consensually supportive, Sehwag has his own batting to worry about let alone burden the team’s folly. This decision may come in as a dampener much so because Sehwag’s present tour is horrendous to the core. But which are the other options lying ahead for the team? Virat Kohli? Certainly not now, next please? Gambhir? A better option but stands to be seen whether he can boomerang the team back to it’s good old days. Dravid is crying over his bowled dismissals so much so that even if he is dismissed in another fashion in the next test he would count that as “improvement”. Sachin doesn’t have the century in mind but his team does. That’s absurd right? Certainly, the pressure of the century has taken a toll on him and on his team to the extent that none of them have scored a ton in the series so far. Instead of being fingers-crossed on Sachin’s next ton ( which is just around the corner), India might as well wind up the series without a single hundred to their name, not to forget their inability to score 300 runs. The only way India can be assured of accumulating 300 runs, is by hoping that Viru bhai goes on to score a triple ton, which otherwise the team would reach in a painstakingly slow rate.

Captaincy call: Sachin and Dravid ruled out. Then remains VVS Laxman, who is fighting for his own place in the team let alone captain the side. Zaheer is already over-burdened with being India’s pace spearhead while the likes of Ishant, Umesh and Ashwin are relatively new to the mix. Hereby, India is in a situation where it cannot do away with Dhoni. Back in the last Australian tour, Sehwag scored a breath-taking 151 at Adelaide and let’s hope the Lord of 22 yards re-writes history.

Summarizing India’s downfall is best exemplified by the catch-line, ‘Tigers at home, lambs abroad‘. The die-hard Indian fan would only wish their team puts up at least some kind of fight  rather than suffocate and panic in dire situations. A pure Aussie blood would wish for an Indian win in Adelaide because the series is already in their kitty and a Sehwag-led victory would unsettle the Indian team’s scheme of things and questions will start to be posed on Dhoni’s very inclusion in the team given his barren record with the bat overseas. Like Gavaskar famously said at the end of the Sydney test, ‘Melbourne is gone, so is Sydney and Perth will go as well.” Horrifyingly, but truthfully, India will taste loss in Adelaide as well.
Posted by Seasonal Magazine at 3:45:00 PM