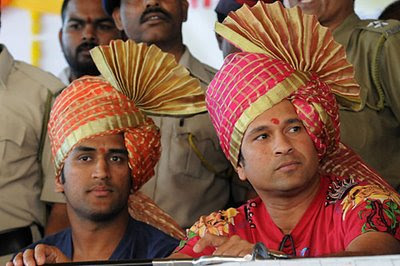 As predicted before the commencement of the Australian tour, India let themselves and their fans down with yet another abject surrender. Before this starts to become a habit, India must arrest this horrifying slide. An overhaul in Indian Cricket is impending. The sooner, the better. Losing is part and parcel of any sport, but the margin of defeats shocks one more than anything. As the storyline enters it’s exciting stage, India will hope the infusion of fresh talent, change in the ball color and adorning with the Blue jersey will bring about some relief to their distorted senses.

Even now, interview after interview, press conference after press conference, each Indian player points out that even with 8 successive test losses abroad, India were once the “Former World No.1”. It’s hard to accept for anyone that they’ve been outplayed which is why Sehwag and Dhoni keeps “reminding” the media and fans that they were once world-dominators. But the reality is that India was never World No.1 and will never be if this trend of pulverizing teams at home and being battered by the same opposition at their den continues without any thought put into it. Well, one can confidently say that even the English can’t be touted as the best with their recent setback and defeats at the hands of Pakistanis. This also further implies that Pakistan can’t be portrayed as the best unless and until they tame the English lions at their niche. This just stands to prove that there’s not been many teams who have convincingly taken home with them the unprecedented tag of “title-holders”. India certainly dare not speak about their once held-onto post.

Shameless as ever, Sehwag once again addresses the media claiming that India is World Champions in the ODI format little knowing that another white-wash in this format will only encourage him to speak and praise even more about past laurels when current performance has come a cropper. All the fun and frolic associated with India’s World Cup triumph has to die down, even among the fans. The fans highly rate their home team with never-ending support so much so that any mediocre performance put forward by them is looked upon with strict scrutiny. Whatever Sehwag or the ordinary Indian claims, they must realize the burning fact that India emerged victorious at home. Would we get a surety that this same team would have won us the World Cup if it were held at, say New Zealand? Certainly not because India doesn’t have it in them to de-moralize oppositions abroad. Has the ardent Indian cricket fan ever witnessed the Men in Blue blank an opposition abroad? India won the 2008 Commonwealth Tri-series. Agreed. But India did suffer defeats on the build-up to the finals and didn’t look completely dominant of the proceedings. Even in the ODI series in the Caribbean, back in 2011, India was pushed to the wire on almost every occasion and had to fight it out to earn a victory. Even the recent ODI series against Windies, apart from the 4th ODI in which Sehwag’s blitzkrieg “blew” away the Windies, India had to literally grind out victories. A loss at home would have infuriated fans which did happen as West Indies sealed a solitary win on the tour in the 3rd ODI. But it’s a near-reality that we haven’t been able to seize the initiative even when the opposition is trailing on us. India were all guns blazing in the first test at Melbourne when Australia had to bank on their tailenders to bail them out of a dire situation. And so they did. India failed to wrest the initiative and allowed the tail-enders to capitalize and the end-result was there for all to know. But can our tail-enders bat like how their rivals did? Even if they have done in the past, they weren’t able to re-live the same in this series. But why blame it on the poor bowlers for their poor batting when the better batters came up with not-so-better performances. The Indian batsmen failed miserably Down Under. But would their counterparts fail in the same fashion if they were playing abroad, say in India? We have witnessed the Aussies giving a run for our money when playing in India but we haven’t been able to do so in the same manner (barring the 2008 Perth test). In a nutshell, India haven’t crushed their opposition abroad nor have they scripted massive wins even at home (like the Aussies did to them recently). Thus, India can rule itself out of the reckoning of the top spot until they start winning abroad, convincingly.

Fittingly, even the Aussies have no right to campaign their supremacy just because they beat India at home. The real test awaits them when they tour sub-continent nations. Even the likes of Pakistan and Sri-Lanka have struggled to come to terms with foreign conditions . So it’s not only India’s problem. The quest for supremacy arises when confidence starts taking wings and no team, by far, in recent times has looked far from confident when playing on alien turfs. Thus, the statement that “no team is No.1” gains universal acceptance. Take any sport for example. One can’t completely press for  a Manchester United win in every game nor can one expect the Los Angeles Lakers to romp home victorious game after game. So the champions tag can’t be linked to anyone or any team unless and until the phrase “indomitable” is seen in their blood.

Since there can be no team with such a tag assigned to them during their entire longevity in the game, it’s practical to alter the very terminology of “Champions”. A champion team is one which fights itself out of precarious situations, doesn’t let go of opportunities that comes their way and lays past glories aside and hope to conquer all corners of the world. Such a team learns quickly from their past mistakes and introspects the cause for their downfall. Such teams have in them match-winners who see them through in every occasion. What does it take to be the best? It takes courage and determination to beat the best.

Rankings are just a systematic record of a team’s performance over the stipulated period in question. Mere rankings doesn’t reflect a team’s complete dominance, the very reason why India was never World No.1 nor are the current teams holding onto that spot. With great failures, come even greater sacrifices and Team India will definitely need to make few mammoth changes and sacrifices if it wants to get back on track. By loosing 4-0 to Australia, India have proved that their 4-0 whitewash at the hands of the English was no fluke! Making a mockery of proud teams, whose basics associated with game has come under the scanner, is the only way out to grab their attention and pinch them on their backs as only then will they realize that the sun rises in the east and sets in the west.