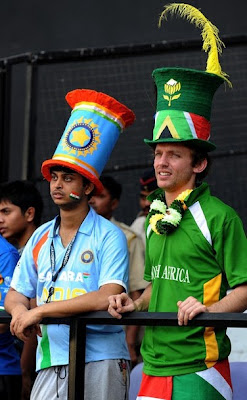 
Hakunama Tata! Waka Waka! Yes, now it’s in Africa!  Although India’s tour to South Africa comprises only of a single T20 encounter, its auspiciousness is of great importance. The match is a commemoration of 150 years of Indian settlement in the rainbow nation, which thereby promises a high-octane clash between the arch rivals.

While the South Africans are on a high, basking in the rare foreign glory, after edging the New Zealanders at the latter’s niche, it’s counterpart India that have serious issues to dealt with.

The past season has been horrendous for the Men-in-Blue as post the 2011 World Cup, heavy defeats at the hands of England and Australia have de-moralized the ODI World Champions. In contrast, South Africa has had an outstanding phase, both in the Test and ODI formats. Even though majority of their matches were at home, the Africans had to fight it out against the challenging Aussies and Lankans.

Then they flew to New Zealand, where after initial hiccups, they conquered and dominated the entire series at the cost of the hapless Kiwis. However, South Africa’s biggest contributor this season wasn’t the likes of Steyn or Kallis but a lesser-known Vernon Philander, who announced his return to competitive cricket with a mind-boggling stat to his short-spanned career and remarkable performance  that would surely envy his predecessors and the existing fast-bowling league.

In just 6 tests, the pacer has already accounted for 55 wickets since making his debut against Australia last year. This is no mean achievement considering that he is part of a pace quartet that has the likes of Dale Steyn, Morne Morkel, and Kallis.

Another special find for the South Africans is a youngster by the name, Marchant De Lange, whose is aptly built for a genuine pace-bowling performance and with typical characteristics of a good fast bowler, the lad can well and truly be the next big thing in world cricket. However the two pace blokes aren’t scheduled to play the one-off T20 international, which provides them the much-needed rest after a gruelling and cumbersome tour.

Their captain, AB De Villiers has been a revelation since taking over the captaincy of the national team from Graeme Smith. His stylish batting approach, and add to that his utility on the field, South Africa has identified the best man to take them forward. While AB was fabulous at New Zealand, the selectors have assigned Johan Botha, the wily off-spinner, the captaincy charge for tomorrows high-voltage clash.

The bowling line-up will be spearheaded by Lonwabo Tsotsobe and assisting him will be rookie pacers Rusty Theron and Wayne Parnell. Albie Morkel, Jack Kallis and Botha can chip in with their useful bowling when the situation demands.

Explosive and bruiser-looking Richard Levi’s levitating feat back in New Zealand where he creamed the fastest ton ever in the history of T20 international has signalled his entry into the international fray. Justin Ontong, Colin Ingram, and Faf Du Plessis constitute the remaining batting slots.

The match will see a special tribute paid to South Africa’s all-time leading sports personality and a legend of the gentleman’s game, Jack Kallis.

Morne van Wyk will be the gloves man for the South Africans. The two new faces in the squad are Farhaan Behardien and Dane Vilas.

The Indians, on the other hand, are taking this game as a redemption match and to sign off the season on a winning note. In the past 12 months, India has played 4 T20 internationals( 2 against England and 2 against Australia), loosing 3 and winning just the solitary game against Australia after being humbled in the test series.

All said and done, India emerged victorious the last time the two teams met in Durban in a one-off T20 international during the sub-continental giant’s tour to the rainbow nation back in 2010. Nevertheless, India has a dynamic T20 squad that can upset any big-wig team despite their miserable track record in the shortest form of the game.

In the absence of Virender Sehwag, Robin Uthappa has been drafted in, after his noteworthy performances  in the domestic T20 circuit but it remains to be seen if the Karnataka-born batsman will make the final cut.

The hard-hitting Yusuf Pathan is surely tailor-made for this form of the game. His match-winning knocks throughout the Syed Ali Musthaq T20 trophy ensured that Baroda overcame the Punjab outfit. His fast off-spin might come in handy for the skipper since regular offie Harbhajan is still not in the frame. His penchant for effecting power-packed whacks and blows to the bowlers makes him an integral part in this line-up.

Gautam Gambhir is India’s highest run-scorer in the T20 format and with his care-free style of play mixed with aggression, Gambhir will be the one anchoring the team to the victory path.

Virat Kohli, the deputy to Dhoni, has been more than exceptional and enterprising. Known for his aggressive attitude, the Delhi youngster showcased his batting prowess with two scintillating tons that came out of nowhere. His ability to finish off games effectively stands in good stead for Team India but he is yet to come up with a notable contribution for his team in this form of the game.

Suresh Raina is altogether a different player when it comes to knocking out  runs in fewer balls which implies he’s suited to realizing the mammoth task in hand with minimal effort. If in Test matches, a short ball would see Raina duck for cover or agonizingly play out the delivery, in the shorter formats the same ball would be dispatched to the crowds with utter disdain indicating his positive mindset to this format.

Rohit Sharma has indeed profited from the injury lay-off to Yuvraj Singh and after a see-saw season for him, the Mumbaikar shone in the last match he played for India against Pakistan. However, with Manoj Tiwary far from due for an opportunity to adorn the India jersey, Rohit must cement his spot in the team with immediate effect as Yuvraj’s  return and Tiwary’s chances are just around the corner.

The biggest plus-point for India are their young legs who have been exemplary and magnificent on the field. Suresh Raina, Virat Kohli and Rohit Sharma are live-wires on the field and they have set very high standards  with their fielding capabilities.

MS Dhoni needs no introduction to this part of the world. It was here that  the Jharkhand-born scripted history for Indian Cricket by winning the inaugural T20 World Cup, captaining the side for the very first time and thereby etched his name into the record books. Dhoni’s take-it-till-the last-over ploy may not find takers but the skipper is one man India can bank on when the team is in dire straits, especially while chasing.

R Ashwin, the Chennai Super Kings star, after a monumental entry into the international fray with his unusual bowling abilities, has looked pretty ordinary in the remaining season. It is highly likely that the batsmen may have unlocked and decoded his mystery deliveries but Ashwin remains Dhoni’s trusted man-for-the-job.

Vinay Kumar and Praveen Kumar may back their swing-bowling abilities to scale greater heights but their predictability may spell doom. Rahul Sharma is a good future prospect and investing in this young leggie will enable the team to have the much needed bowling variety. With Ashwin failing miserably, Rahul Sharma is a better choice for a specialist spinner in the team.

Ravindra Jadeja has been failing time and again and his chances to make it in the playing XI are bleak. Irrespective of his all-rounder tag failing miserably, Jadeja is a cheetah on the field and an exceptional fielder at backward-point.

Irfan Pathan has made a silent,yet noticeable return to the game and his past success in South Africa will be instrumental for the team. Raw and committed  best describes Ashok Dinda has it in him to make it big on the international stage but whether he will be awarded with a berth in the playing XI remains to be seen.

The match will be played at the Wanderers Stadium in Johannesburg, the very venue where India lifted the T20 trophy beating Pakistan in the 2007 final. Even though this match is of less significance in terms of the result obtained from it, the Indians are hoping that a win would help them arrest a loosing streak in this format.

The South Africans may feel worn out after a long New Zealand series but their remarkable home record will help them gain in confidence.

With the IPL barely a week away from now, franchises aren’t too satisfied with the solitary game that the Indian team is to play as it would upset their team-planning and preparation leading to the extravaganza.

But on a larger picture, this match is more about strengthening ties between the two nations. Since the age of Apartheid, India and South Africa have come a long way and this game will mark the bonding and togetherness of these two upcoming global game-changers.

It is a short safari for the Indians but even in a safari, one is bound to be careful about wild creatures and animals pouncing and tearing the flesh out of one. So the more well-equipped the Indians are with suitable firepower and ammunition, the better prepared they would be. It has been a long journey to South Africa but an even shorter stay there.

Let us hope that the organizers don’t plan on conducting the IPL in South Africa again in case the Indian players cry over fatigue and tiredness. If that happens, well, the IPL isn’t inevitable after all thus not conducting it would be a blessing in disguise.