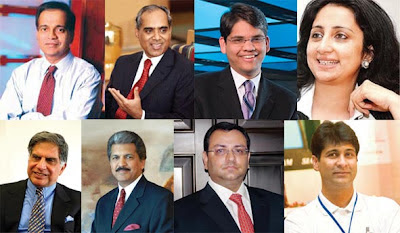 The latest quarter was witness to some of the most high-profile transfers of power from the old to the young, in India Inc., with more in the offing. But at the political level, no such comprehensive move is even visible on the horizon.
Is there a single step that leaders of today can take, to ensure that leadership is transferred to the next most capable hands?

Well, there seems to be universal agreement that, such a single step is to find a younger leader.

Corporate earnings season in India, this time around, was rife with examples of this phenomenon. But too bad that there is no comparable political earnings season every quarter, or such a precedent of making way for the young.

Anyway, one such young talent that came into focus this earnings season was Francisco D’Souza. All of 44 years now, this young leader has rapidly transformed a former Y2K contractor like Cognizant Technology Solutions into a powerhouse IT Services outsourcer that is consistently beating industry bellwether Infosys for some quarters now.

Media was flush with reports about how the ’The Kid’, as he was known in his MBA and early CTS days, was using his globalized early schooling years to manage the 1.45 lakh strong multicultural talent pool of Cognizant.

A programmer since his school days, a gadget freak since the PDA days, and a follower of the ‘Maker Movement’ for the sake of his young kids, this young leader is intensely competitive, as seen from his recent operational style of leaving day-to-day control to others and focusing on a new set of initiatives that he calls the Emerging Business Accelerators.

EBAs are unique future opportunities presented by new geographies, solutions, or technologies. D’Souza directly heads 4 of the 18 EBAs that CTS has so far identified.

That is young energy in action. But to argue that D’Souza would have achieved that without the CTS framework would be an oversimplification.

To give credit where it is due, CTS always enjoyed a blue-blooded lineage as it started as a partnership of Dun & Bradstreet and Satyam Computer Services (during its heydays before Raju started riding his proverbial tiger).

D&B needs no introduction on its own, as the creator of one of the largest corporate databases in the world, if not for its subsidiaries like Hoovers and AllBusiness.com, and if not for the companies it has spun off successfully like Moodys and Nielsen, and later CTS.

Any leader worth calling by that would also never forget what even the normally arrogant Sir Issac Newton once said:

“If I have seen farther than others, it is because I was standing on the shoulders of giants.”

Who were the giants on whose shoulders D’Souza stood? There were plenty like Cognizant’s renowned founder Srini Raju, its legendary CEO Kumar Mahadeva, and most importantly, a soft-spoken later-day leader like Lakshmi Narayanan.

After Mahadeva’s stormy exit in 2003, Lakshmi led the firm admirably for three years. Then he did something unthinkable for most leaders.

The wise man that he was, Lakshmi knew what was going to hurt CTS or any other tech firm in the coming years - attrition of top talent that was still very very young. So he unilaterally shot off a circular to all senior managers that retirement age has been cut to 55.

He also shot off a mail to young managers like D’Souza that this has been done to assure the young guys that there are plenty of opportunities for them in the top rung.

The first casualty of the new circular? Lakshmi himself! That is how he got to play an instrumental role, together with the CTS Board, in identifying the best young candidate available - Francisco D’Souza.

The rest is history. Since he took over, Cognizan’t CAGR has been 35% that propelled it from $1.4 billion in annual revenues to over $7 billion now.

The CTS story is not any exception. Every conglomerate out there, which is serious about its future, is transferring leadership power to the younger generation.

During the meeting, one eager shareholder wanted to know why had Tata allowed M&M to overtake it in SUVs, and Ratan being the good human being he was, admitted that it was a shame.

But truth was a bit farther and more shameful. Truth was that Anand Mahindra has been in charge of M&M since he was 42 years of age and full of powerful ideas that became Bolero, Scorpio, & Xylo. By the time Anand took over in M&M, Ratan Tata was more than a sixty ripe years.

Well, to give credit where it is due, Tata did beat a younger Mahindra to tasks like taking over JLR and turning it around against all naysayers. But that was the kind of aristocratic stuff that Tata’s age was more suitable for. Look at how he and his team bungled up in Nano.

It is not only entrepreneurs but top executive positions that are going to the young. Consider the case of 42 year old Manisha Girotra, M&A specialist, who has headed UBS India as Chairperson and recently moved on to head Moelis & Company's India foray.

Also, don’t expect that every succession plan is going to be smooth. There has been plenty of unwilling leaders like Rahul Bajaj, who in their innocence, use to think that sons like Rajiv Bajaj may wreck their hard-won success.

But the younger Bajaj has went on to prove that his young strategies have been the right strategies in a world of tough competitors like Hero MotoCorp and Honda. His risky strategy of forsaking the age old Bajaj brand for standalone brands like Pulsar and Discover has paid rich dividends.

One reason why our politicians have not followed this model is simple enough. If out of designation, what would they do?

Lakshmi of CTS perhaps had the best answer for this. The gentle leader that he was, he soothened senior managers’ feelings by promising all retired seniors use of one personal office room and all communication facilities at CTS campus, so that they can work as senior consultants of the company if they wish so. And miracle of miracles, that model too has been a resounding success at CTS.

Lest anybody think that our most honourable office of the President of India is such an arrangement, let us stop here. Besides, the writing has been on the wall forever - the young must be called in for a nation to succeed.
Posted by Seasonal Magazine at 5:42:00 PM