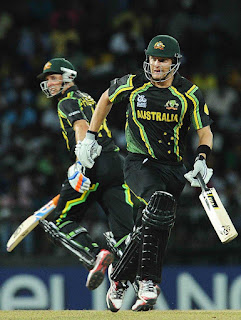 
As the tournament progresses into its business end, the teams have raised the standards of their game, adding to the competitiveness and quality, which is so demanding in the modern era of cricket. The ridiculous scheduling of matches in the initial group stage has attributed to the early exits of the minnows providing the top-flight teams a face-saving opportunity. However, few have capitalized on this front.

South-Africa look as if they don’t deserve qualification for a semi-final berth considering their pathetic display in the Super-Eights which saw them handing Pakistan an improbable win, which was also courtesy Umar Gul fireworks, and they also received a sound thrashing in the hands of the in-form Aussies. The two losses have virtually shown the Rainbow Nation the exit doors which imply that the chokers tag remain firmly attached to their rolls. An unimpressive net run-rate summarizes their dismal showing.

New Zealand or rather, Brendan McCullum, started off with a bang but deflated to unproductiveness in the same scale. They experienced a similar fate like the South Africans by narrowly losing to the Lankans in the Super Over after which they were steam-rolled by England. That makes South Africa and New Zealand the first pair of twins.

Though both teams still have an outside chance to sneak in through to the semis, they must inflict a morale-boosting win which should be reflective of a huge-victory margin if they are to save the blushes.

The Super-Eights of the 2012 T20 World Cup has witnessed twin-resemblance scenario from both the groups. While New Zealand and South-Africa find themselves in a fix, West Indies and India look far from convincing regardless of their sole victories against England and Pakistan respectively. Both have demonstrated an over-reliance on a select few (like Virat Kohli and Chris Gayle) which sounds alarming considering the tough teams they are up against next.

The occasional performances from  Charles and Rohit Sharma, though commendable, has lacked the propelling factor that would have won them the lost games against Sri Lanka and Australia respectively.  And that makes India and West Indies the next similar pairof twins in the Super Eight.

Talking of the two well-balanced outfits in this edition, Australia and Sri Lanka have made things easier for them by coasting to victories in their first two-match ups, providing them a cushion of relaxation. While Australia look the more dominating one, Sri Lanka find themselves perched in a conducive position thanks to the stereotypical home-advantage and atrocious bloopers committed by the opponents.

The clinical performance by the Kangaroos should undoubtedly be credited to their star all-rounder, Shane Watson who has now grabbed four consecutive man-of-the-match awards in lieu of his fine feat of accumulating 200+ runs and picking 10 crucial wickets in the process. The explosiveness of David Warner has worked immensely for the 9th-ranked team in T20. Glen Maxwell has proven to be a master-selection with his timely knocks and handy bowling skills.

Nevertheless, the middle-order has gained limited opportunities which may transpire into trouble if at all the W’s fail to deliver. Runs for Michael Hussey means further pause on the selection of his brother, David Hussey. The fast bowlers have aided the efforts of the openers with their tear-away pace and sweet chin music. Mitchell Starc, Pat Cummins, Shane Watson, Brad Hogg, Daniel Christian, Maxwell and Xavier Doherty have all contributed beyond expectations which make the Australians the team to beat.

Sri-Lankans have delivered in sync with their reputation of being “Lions” at home with a glittering display of cricket that has signalled doom for their opponents. And the more notable fact is that the Sri Lankans have tasted success without the usual support of Malinga as Ajantha Mendis has shown tremendous bowling ability to emerge as the second highest wicket-taker. The batsmen, pointedly Mahela Jayawardena and Dilshan, have ensured able support to the bowlers’ hard work with their sensible execution of strokes. The team is on a high with a convincing victory over the West Indies, which make them serious semi-final contenders.

However, the all-rounders of the likes of Angelo Mathews, Jeevan Mendis and Thisara Perera haven’t contributed enough in the batting front. Dilshan and Jayawardena are Sri Lanka’s answer to Warner and Watson. The return of Nuwan Kulasekara into the thick of things has boosted the vigor and energy within the team as he provides the skipper with an additional batting option. It has been a somber and silent tourney for Malinga but his utility is of utmost prominence for the team when the chips are down. And that makes Australia and Sri Lanka the Twins No. 3 in this tournament.

The case of England and Pakistan is also unique in this context. When they play horrendously poor, they play the poorest of cricket. But when they are on fire, opponents can little match up with them. The English should be indebted to Luke Wright, the cheeky all-rounder, who has fitted perfectly into the void left by Pietersen.  Like Pakistan, England have a remarkable bowling attack that boasts of the likes of Steven Finn, Stuart Broad, Tim Bresnan, Graeme Swann etc. But their susceptibility in playing spin-bowling has been exploited effectively by their rivals. Even Pakistan faltered against the Indian spinners. The Men-in-Green owe a huge gratitude to the Akmal brothers who have maintained their composure in times of turmoil. The pace-battery is more or less similar to the English but it remains to be seen whether the unit can torment the sub-continent teams like India and Sri-Lanka, who are brilliant exponents of playing spin. And that makes Pakistan and England Twins No. 4.

All in all, Australia and Sri Lanka have shown the essential calibre that will take them all the way but India and West Indies may spring a surprise. The chances of South Africa and Kiwis look bleak but after the first two rounds of the Super-Eights it seems obvious that Sri Lanka and Australia will go through by winning their remaining game. As to the other two teams, India stand a good chance as they play a relatively demoralized South African unit and West Indies look favourites to topple the Black Caps. It will take some beating to upset the Australians and Lankans which make it difficult for Pakistan and England, but they are well and truly in with a chance. So we have Sri Lanka, Australia, India and West Indies. But its T20, and you may never know.
Posted by Seasonal Magazine at 8:04:00 PM