Why Wockhardt will Recover Soon 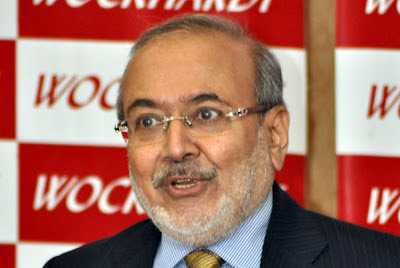 Wockhardt (BSE: 532300, NSE: WOCKPHARMA) stock continued its losing spree today, after USFDA issued an alert against the import of products from the pharma major’s injectables plant at Aurangabad. The company has already quantified the impact and confirmed that it is expecting a financial impact of $100 million this fiscal due to this ban. However, the million dollar question for investors is whether the stock has reacted too much already.

The stock has already corrected by over 50% from the 52-Week High of Rs. 2166 that was recorded during mid March. It looks like a clear case of over-reaction as, even during its 52-Week peak, most analysts were feeling that there was significant room left in valuations, compared to peers. Wockhardt was said to be relatively underperforming back then pending the full or formal resolution of their debt issues.

The 50% fall has come through during such a scenario, and that is one reason why it looks like an overreaction. Secondly, the same kind of issues was earlier faced by most Indian pharma majors, and most of them have come out of the crisis after making necessary modifications at their plants. The best recent example has been that of Claris Lifesciences.

But the most compelling reason why Wockhardt will recover from this slump is the management quality. The management has weathered bigger storms like the debt crisis which almost sunk the company, and they have displayed the capacity to practically reinvent the company thoroughly to emerge stronger.

Wockhardt’s dramatic turnaround through CDR has so often been cited these days that, it now runs the risk of being viewed too simplistically. Even worse, witnessing the dramatic turnaround in Wockhardt’s stock, at least some sections of the market have come to believe that getting admitted into the CDR cell is the magical switch that causes a free-falling stock to stop and go overdrive, full-throttle.

Though much of the pharma major’s turnaround from the brink is well-known, Seasonal Magazine decided to get the story straight from Chairman Dr. Habil Khorakiwala. What he shared with us is so profound that though it may be a bit dizzying for the faint-hearted, it will be inspiring for all who believe that success is never easy or automatic.

The crux of the story is not that the whole Wockhardt family - starting with the promoters - had to make great sacrifices and undergo great pains. There were sacrifices and there was unavoidable pain, of course, but that was not the main challenge.

But before mentioning the main test, it is important to understand that Dr. Habil still thinks that much of the Rs. 4325 crore debt was not aimlessly made, but that most if not all of it, later proved to be the real game-changers for Wockhardt.

The now good-looking journey really began in the year 2006 when the company embarked on an aggressive acquisition strategy to extend its presence in the Indian and international markets.

Of course, there were other losses too, like derivative losses.

Though there is no doubt that the company was overleveraged at that time - net debt / equity was at 5.7 times - what really upset Dr. Habil’s calculations was the global economic slump that started in 2008 and sustained for a couple of years.

In July of 2009, the company was referred to the CDR cell.

Though laden with a heavy debt burden, the fundamental business of the company remained strong. However, Dr. Habil’s genius lay in the fact that he realized a great truth - that much more than debt restructuring was needed to make good of the acquisitions that caused this debt, and thus elevate Wockhardt to a highly rewarding trajectory.

The result of this realization was the formulation and implementation of a 3-year strategic business plan. Wockhardt also coined a perfect mission statement to make all the stakeholders, especially its employees, understand this policy. This mission statement was ‘More and More with Less and Less’.

But that was easily said than done.

Then came Dr. Habil’s master strategy for getting it going. He started focusing on margins. In the pharma business, high margins primarily means high-margin markets and nothing much else. That is how Dr. Habil started shifting Wockhardt’s focus to the most lucrative market of them all - USA.

But even that was easily said than done.

To effectively deliver in this most advanced market, Dr. Habil knew that he would have to make Wockhardt spend more on one front - Research & Development. That is how, even amidst heavy cost-cutting on almost all other fronts, Wockhardt’s R&D spend steadily began to rise. From 3.6% of sales in FY’10, it jumped to 5.4% of sales in FY’12. It has again risen to 5.9% of sales in the first three quarters of FY’13.

And the results from this move came in as emphatically as good karma. Contribution of US markets in sales jumped from just 20% in FY’10 to 44% in FY’12 and 50% in the first three quarters of FY’13.

Operating Profit Margin rose from 17.6% in FY’10 to 31% in FY’12. Also aiding margins were a couple of product strategies like differentiated products with complex technologies, and niche products with small market size, that helped mitigate competitive risks.

But even these - R&D and product strategies - were not everything.

People were empowered, productivity was increased, and cost optimisation was vigorously pursued across all their activities. The result was pleasant to look at with operating expense as a percentage of sales falling from 37.7% to 32% during the same period.

And the greatest beauty of the whole strategic shift was that all these happened without sacrificing on the topline growth. Sales, in fact, surged from Rs. 3638 crores in FY’10 to Rs. 4614 crores in FY’12.

Meanwhile, the execution of the scheme for Corporate Debt Restructuring was being fully implemented, quarter after quarter.

Dr. Habil had bargained for a lucrative deal with his lenders, keeping in mind the long-term interests of all stakeholders, including all of Wockhardt’s equity holders who had been severely hurt during the free fall of the stock. Dilution of the core equity base was avoided, even while arrangements for preference shares were accommodated in lieu of interest-cuts and deferments.

Due to their co-operation and authentic dealing with their lenders Wockhardt was also successful in obtaining a really long lease of life for their remaining debt - extending up to 2018.

But the going was not very smooth always, as there were lenders who found value in Dr. Habil’s strategy as well as lenders who tried to extract more and immediate returns from Wockhardt. They even went on to file a winding up petition against Wockhardt at one stage. But Dr. Habil stayed on course, fighting all his battles with elan.

Promoters also brought in Rs. 80 crore as part of the CDR package, for which Dr. Habil had to make personal sacrifices like selling assets in unlisted operations like Wockhardt Hospitals.

The simultaneous strategies of re-focusing on high-margin businesses as well as complying fully with CDR process have had a magical effect on the balance sheet as well as the stock.

Today, Wockhardt’s Total Debt Outstanding on the books is just below Rs. 2000 crores with Cash-on-Hand of Rs. 1000 crores. Net Debt to Equity Ratio has fallen dramatically from 5.7 times in FY’10 to just 0.6 times by September 2012.

Even more dramatic was the surge in Wockhardt’s stock performance. From its all-time low of Rs. 68 during April 2009, it has appreciated to a recent all-time high of Rs. 2166 - which is an almost 32X wealth appreciation within as little as 4 years.

And analysts believed that Wockhardt stock was still not fully priced in, before the FDA alert came in recently.

On his part, Dr. Habil Khorakiwala is continuing to steer the company towards increasing its investment in R&D so that it will continue to be the growth engine for the future. All the while teaching Wockhardtians and all of us for that matter, that what really matters in business and life is doing ‘More and More with Less and Less’.

Such strategies and management quality is what would make investors believe that Wockhardt would ride out this storm too.
Posted by Seasonal Magazine at 1:56:00 PM
Labels: Business