Shikhar Dhawan Ups the Bar for Other Players 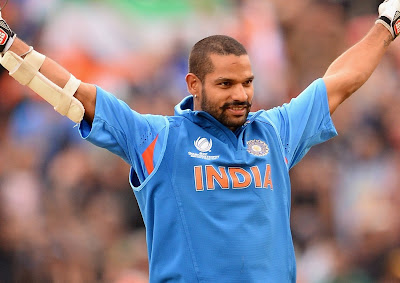 
Shikhar Dhawan has once again proved his worth. From being relegated to a position beyond the clichéd ‘bench-strength’ to smashing a phenomenal century on Test Debut and a comeback of sorts, Dhawan has kept cricket-viewers spellbound with his ferocious batsmanship. Though inconsequential in terms of official records, the match between South Africa A and India A produced a feat that will take some surpassing. Shikhar Dhawan, the curly-mustached warrior-like batsman, hammered 248 off just 150 balls to set the records tumbling. Sehwag’s 219 against West Indies is now a distant third in the list of highest individual scores in limited overs cricket. The quality of his batting was that he timed the ball to perfection more often than not and ensured that he played a 100% risk-free game. Dhawan’s African safari has already begun on a roaring note.

If one observes Dhawan’s recent batting graphs, the likely common factor in those big innings has been his all-round-the-wicket strokeplay. Never once did he predominately score on one side of the wicket which is a testimony of his ability to place the ball almost anywhere at will. As the South-African captain pointed out, Dhawan’s crowded wagon-wheel doesn’t suggest that the bowlers had a rough day staying in line and length. The regularity with which Shikhar Dhawan hit boundaries off his bowlers made Justin Ontong feel as if he was watching a "highlights package" where only boundaries and sixes are shown. "There was nothing the bowlers could do," Ontong said." They were bowling the lines and lengths they wanted to be bowling and he just hit them off those lines and lengths."

Dhawan has, in a rather phenomenal fashion, cemented his spot in the Indian line-up at least for the next 5-6 months. His success in opening the batting has been marked by a steady rise in India’s newfound indomitable status in world cricket. So instrumental was he in solving India’s opener woes that the Indian cricketing records will be bifurcated fittingly as Before Dhawan and After Dhawan. It may well and truly be the culmination of India’s once-upon-a-time batting heroes, Virender Sehwag and Gautam Gambhir who have now found a valid reason in playing the long-drawn Ranji season. Before, the duo escaped scathing criticism for poor performance by flaunting their batting stats when they virtually had no replacement options. Now with the new-found resurgence of Shikhar Dhawan and his talented compatriot Rohit Sharma, the Viru-Gauti combo will have to accept their fate and resume from the basics. Gambhir responsibly tweeted after Dhawan’s epic knock "Shikhar proud of u, brilliant knock. Keep going, keep the tricolour fluttering," he wrote. In another tweet, he added: "And yes Shikhar, thanks for raising the bar for all of us. Good luck for future too."

The writing is on the wall for most of the senior pros of the team, who are now languishing in the bench. It is a pity that Dhawan’s enterprising innings comes at a time when the BCCI is arrogantly refusing to come under the RTI, which may have instilled added confidence in the fans on the functioning of Indian cricket. Dhawan’s journey to excellence has in fact only begun. The law of average will one day catch up with him too when he will encounter lows in his career. At least for now, Dhawan’s cheerfulness should brighten up a somewhat sulking cricketing mood in the country in the wake of the spot-fixing allegations and the BCCI-RTI row.

Dhawan’s knock could not have come at a better time considering the crucial match-ups in India’s 2013 calendar. India is well on course to challenge the top teams having now re-established their supremacy as the emerging power of world cricket.
Posted by Seasonal Magazine at 5:55:00 PM
Labels: Cricket