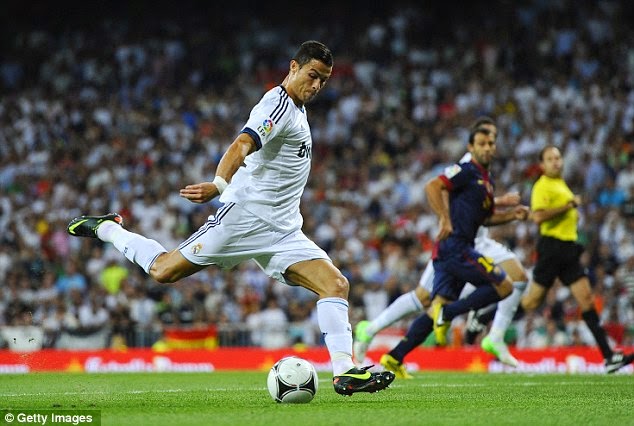 
When Real Madrid and Atletico Madrid fly to Lisbon to lock horns in what will turn out to be a high voltage clash, a very unique record will be witnessed - it is the first time that two teams from the same city are facing each other in a championship final. Within hours, it will be known whether Atletico Madrid can rein in Cristiano Ronaldo and upset Real Madrid.

The highest pinnacle of club football , the UEFA Champions League final is all set to blaze in Portugal’s capital city of Lisbon. The two neighbours - Real and Atletico -  from neighbouring Spain, who are familiar foes will look to pin down each other and to conquer Europe.


Real Madrid which is eyeing their 10th CL title will be raring to go and achieve a feat no club in the history of football has ever achieved . Real which has won this tournament the most number of times, however will not look back and boast of the laurels their previous generations have collected . The neighbourhood has got a whole lot tougher and Real Madrid will really have to sweat it out to earn this one .


The 90's was a time when Real was experiencing easy form and collecting titles had become more of a hobby rather than hard work. However , the last time Real won the championship was back in 2002 when they edged Bayern Leverkusen 2-1 to clinch the Champions League.


Starving for a CL title for over more than a decade , this seems like the perfect time for them to eat their fill, again. With the likes of Cristiano Ronaldo, Gareth Bale, Iker Casilas, Angel di Maria, Karim Benzema - in fact we can keep pointing out more names but then it will be easier to name three-fourths their squad - in their ranks, Real Madrid boasts of a team rich in talent and depth.


However, the absence of Cristiano Ronaldo due to an injury has hampered the team's performance which derailed their La Liga title quest. Overdependence on the Portugese star might be a minor concern and cause them to choke. The combination of Ronaldo and Gareth Bale is lethal and their pace has left many defenders overwhelmed.


They also have the clever Carlo Ancelotti as their Manager who has impressed many in what is only his first season at the Spanish capital. The road to Lisbon hasn’t been all that easy for them but they did come up with hard-fought wins over three strong German sides in their last few games.


Their 1-0 win over Bayern Munchen in their 1st leg of their semifinal might not have left the spectators spellbound but that wasn’t the case after the 2nd leg. The reigning champions were picked up with ease, thrashed, thrown on the floor and thrashed again. By the time the whistle blew after the game, the Bayern players must have been grateful that the scoreboard only read 4-0 and not 10-0. Bayern looked helpless against the Los Blancos who split open the German defence like a knife slicing through butter. Playing with breathtaking counter-attacking football, Madrid do look like the team that is likely to dominate Lisbon.


Their neighbours, Atletico Madrid who have been living in the shadows of Real Madrid for the majority of their lives will not be, however, easy pushovers this time. They have thrived this season, cliching the La Liga and breaking the age-old dominance of the Big Two of Spanish football, Real Madrid and Barcelona. This achievement will serve as a very big motivator for the lesser achieved Madrid team. And a team like Atletico which is in sublime form this season has to be feared, greatly.


Their star player this season has been Diego Costa and this game might be his last according to the news of his move to Chelsea next season. He will be looking to make a huge impact and a CL trophy will be the perfect icing to his Atletico career.


They might not have many renowned players to brag about like their foes but they do posses a well balanced fighting unit. Their comeback goal against Barcelona in the decisive game has shown that there is something very special in their team.


Their coach and manager Diego Simeone has been extremely influential and has been the driving force behind their triumph in the domestic league. This CL final is not out of their reach and they even might win it. The manner in which Atletico has played  throughout this season is to be applauded and deserves high credit.


A point worth noting is that unlike Real, Atletico had had an unbeaten run in this tournament as they notched up 9 wins and 3 draws. Their semi-final onslaught on Chelsea underlines the team's determination and diehard attitude. Coming from behind, Atletico scored thrice ensuring that the 2012 champions does not win back the CL.


The best result for them at this championship was way back in 1974 CL finals when they lost to Bayern Munchen after a re-match. Although this team might look like the obvious underdogs , no football analyst will write them off easily as they are expected to give Real Madrid an intense run for their money. The supporters of Atletico, who have been buoyed by their La Liga title win will not accept anything less than a win from the white-and-red striped.


They pack a very potential and powerful punch in Arda Turan, Raul Garcia, and David Villa. Their goalkeeper Thibaut Courtois who conceded only 6 goals in 12 games holds a very crucial edge for them. The emergence of this hardworking team in the ongoing season has won many hearts and will remain as Atletico's main inspiration.


Anyway the stage is set and the tournament has boiled down to a very special final. Will the Champions League have a maiden winner in Atletico or will the dominating Real complete a very coveted record of 10 CL titles? The answer will unveil in Lisbon and expect nothing but a thriller.
Posted by Seasonal Magazine at 12:21:00 PM