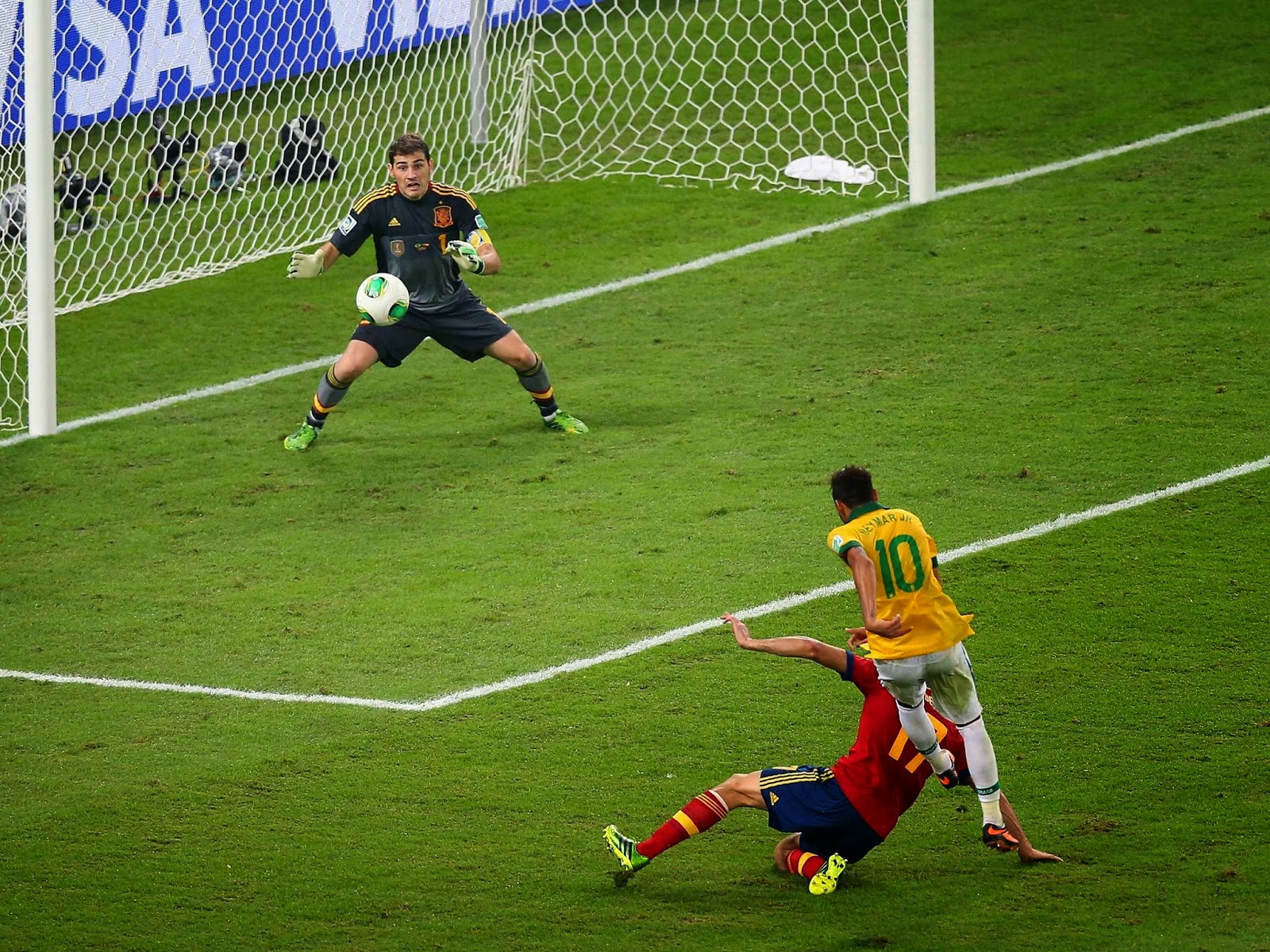 
It has been an energy-packed World Cup in Brazil with emotional overflowing and nail-biting finishes ready to take centre stage when the quarter-final matchups commence from Friday. After an eventful Round of 16, that didn’t prove to be historical moments for the lesser-fancied teams, the 8 teams that progressed are the same ones who topped their respective groups in the group-stages: Germany, France, Brazil, Colombia, Costa Rica, Argentina, Belgium and Netherlands. While many would expect title-contenders like Germany and Netherlands to coast through to the next stage, there is considerable support for the ‘dark-horse’ teams like Belgium and Colombia who can spring a surprise on their field days. None of the 8 teams, barring Colombia, has had a smooth passage to the quarter-final phase so it is safe to assume that it could be anybody’s victory. The teams have come within touching distance to lay their hands on the prestigious FIFA World Cup Trophy and a competitive ‘fight till the finish’ is very much on the cards. As tensions soar and fans roar with pride, the much-anticipated and intriguing round of football-mania is sure to leave the world enchanted.

France was left frustrated by a stubborn Nigeria, before finding the late winner through a Pogba goal enough to book their berth in the quarter-final. It has been a mixed bag for the Les Blues so far. After their impressive showing against Honduras and Switzerland in the group stage, France has struggled to find the back of the net due to some poor finishing by their frontline attack comprising of Oliver Giroud, Karim Benzema and Paul Pogba. Mathieu Valbuena has been the lone bright star for France despite Debuchy’s indifferent form as a right-back. Varane, Koscielny, Sagna and Mamadou Sakho have been scratchy on defence and will be tested against a more formidable German attack. Germany, on the other hand, lacked intensity in their Round of 16 victory over Algeria. The mid-field looked disorganized partly due to the absence of one of the best defenders Mat Hummels, who has been the crucial link for the Germans. More alarmingly, Germany’s defenders (Mertersacker, Boateng, Mustafi, Howedes), all of whom play club football as central defenders, lack the agility to push back when the opposition stages a counter-attack and has often been saved the blushes by their always-on-the-move keeper Manuel Neuer, who doubles up as the ‘fifth defender’. However, Germany’s strength lies in their main three: Schweinsteiger, captain Lahm and Kroos, who’ve often manned the mid-field play supplying those crucial balls to Muller and Ozil. In the best interest of Germany, bringing in a proven goal-scorer like Miroslav Klose and putting Thomas Muller in Lahm’s position will not only increase their ferocity in attack but also allow the German captain to play his favorite role: the world’s best left-back.

From a promising start to a chaotic one, Brazil’s chances for ultimate glory, with every passing match, keeps depleting. Defence in disarray, uncreative mid-field and lack of an able foil for Neymar have been the causes of concern for a nation hoping to put an end to the domestic turmoil that plagued Brazilians before the start of the World Cup. Lady luck has showered her blessings on them after their thrilling penalty-shootout win over Chile and a little help from the crossbar settling the issue for the 5-time champions. But Brazil will need to show better coordination and composure if they are to give themselves any chance of progressing to the semifinals. Their game against Chile showed that if Neymar finds the going tough, it is destined to rub on the whole team too. Apart from Hulk, who produced instances of individual brilliance, none of the others played to their potential even giving away a needless goal to Sanchez due to defensive blunder. Marcelo, David Luiz, Dani Alves and Thiago Silva have made costly errors which they may find unforgiving against a free-scoring team like Colombia. Fred has clearly been a misfit in this team, making no worthwhile contribution thus far since his apparent dive against Croatia in the opener won his team a much-needed penalty! Oscar needs to step up his game and create goal-scoring opportunities for the likes of Hulk and Neymar. James Rodriguez, Colombia’s prolific goal-scorer, finds himself in the enviable list of leading goal scorers, currently leading the pack. Aguilar and Cuadrado have been in ominous touch and can rip through the vulnerable Brazilian defence. Colombia has displayed an excellent team-effort and has so far never had to deal with potent strikers like Neymar. It will be a test of Brazilian nerves and Colombia’s ability to rise to the occasion.

Costa Rica has surely been the surprise-package in this World Cup after not only emerging group winners at the expense of England and Italy but also for their tremendous self-belief that won them a nerve-wracking penalty-shoot-out against Greece in the Round of 16. They don’t boast of star players but the team has been admirably led by their inspirational coach Pinto Jorge Luis who has successfully put together a well-knit unit capable of upsetting the best in business. Costa Rica showed the world why their group-stage heroics was no fluke after defending the last 30 minutes of their Round of 16 match without the services of Oscar Duarte, who was sent-off and prevented the Greeks from making inroads. Having got the better off powerful teams thus far, Costa Rica could pose a serious challenge for a rusty-looking Dutch attack. Apart from Arjen Robben, none of the other Dutch stars looked menacing enough to force open chances and having done exceptionally well in the shoot-out, talented goalkeeper Keylor Navas will fancy his chances against a team that struggled to get past Mexico’s Ochoa for most part of the game. Eventually, Netherlands have found goals coming thick and fast being the team that has scored the most number of goals thus far. Sneijder and Kuyt will look to continue their good forms after the former’s late equalizer set up the Dutch recovery. Netherlands will also be wary of Costa Rican forward Bryan Ruiz who has been a force to reckon with after his exploits against Italy that sent them out crashing and his goal against Greece. The real worry, however, will be the shoddy finishing of their premier striker Robin van Persie who just couldn’t find the flow to his game.

Messi-magic was there to witness for everybody glued to Argentina’s road to the quarters. The Barca star delivered killer blows against Bosnia-Herzegovina, Iran and Nigeria to knock the stuffing out of his critics, who’ve always questioned his contribution to the national team. However, that’s not all. The 3-time World Footballer of the Year proved his worth yet again by providing the assist for Di Maria’s goal that send the Albiceleste to the quarter-finals where they take on a dangerous Belgian outfit. Argentina made heavy weather of their Round of 16 encounter against Switzerland, messing up many opportunities and glaring defensive lapses almost send the Europeans into the last 8. The disastrous form of Higuain may lead to his ouster and the think-tank should look to fit in Aguero, who is more versatile as a striker. Angel Di Maria looked good to score more as he amassed a total of 12 shots on target, reaping success just once. Though he is yet to open his account, Eden Hazard showed why he can match up to the best at the World Cup stage playing the playmaker’s role to perfection. De Bruyne and Lukaku have been the wreckers-in-chief propelling Belgium to the last 8 through their spirited performance in the mid-field. Also, Vertonghen, Mertens and Witsel have been able mid-fielders always on the prowl for goal-scoring chances. The defence, spearheaded by captain Vincent Kompany, has shown their capabilities and alongwith Alderweild and Vermaelen, the Belgian defence appears to be in fine touch. However, stopping a rampaging Messi will take a herculean effort.

Players to watch out for: Messi (ARG), Hazard (BEL)