What Modi Can Learn From Former Prime Ministers 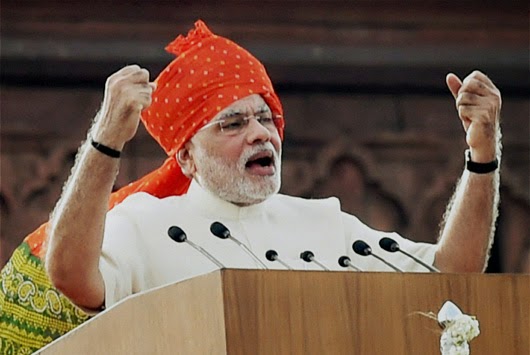 Can Modi become the best ever Prime Minister India ever had? His unique speech on Independence Day prove that he does have that ambition. Though he is only 90 days into the job, he has matured. When he first entered Parliament, he had remarked that the previous government did whatever they could and that he was not going to focus on their faults. But in his maiden Independence Day speech as PM, he showed even more maturity and understanding by acknowledging the roles of all well-performing Prime Ministers before him. Yes, indeed, there is much to learn from their good sides for any PM including Modi.

Long before he became the first PM of India, Nehru was determined to steer Congress and India towards a socialist path. This was not as easy as it sounds today, because Congress was full of economically right-wing stalwarts like Sardar Patel, Dr. Rajendra Prasad, & C Rajagopalachari. But Nehru had the unflinching support of Gandhi to follow a socialist path, as well as support from left-wing leaders like Maulana Azad and Subash Chandra Bose. Nehru systematically destroyed Congressmen’s capitalist ambitions, but his genius was that he did so by winning over all detractors and giving them prominent positions in the government. The result was Independent India’s most profound successes like its unique and gigantic Public Sector, its mixed-economy, the agrarian revolution, as well as the Non Aligned Movement that saw both West and Soviet Union competing to fund and technically aid PSU projects here. Nehru was an institution-builder par excellence, and apart from the huge PSUs he built in steel, power, & coal, it was his vision that saw educational institutions of world repute like AIIMS, IITs, IIMs, NITs, & various Agricultural Universities. All within a period of 17 years. And the greatest achievement of them all was that all these institutions were placed across the country and not just in the Hindi heartland. A good point for Modi to start will be attaining Nehru’s momentum in rapid institution building, even if they are in the private sector.

Nehru’s death again brought the right-wing / left-wing conflict to the fore, and the majority favoured Shastri, a strong socialist to take up power, mainly to prevent the capitalist Morarji Desai from staking his claim to the top post. Shastri continued Nehru’s legacy of socialist development for the masses with his most notable achievements being the White Revolution for milk production and Green Revolution for the grains. Both went on to become huge successes. Shastri is noted in history for backing iconic projects like Amul, National Dairy Development Board, Food Corporation of India, and the National Agricultural Products Board - all of them making lasting contributions to the Indian nation. Unlike his soft-spoken nature, he was a man of momentum and these huge achievements were made during a tenure of less than 2 years! But Shastri’s biggest success was winning the Indo-Pakistan War of 1965, against all odds, including a belligerent Chinese stand. He inspired the whole nation with his ‘Jai Jawan Jai Kisan’ slogan for a decisive win that would haunt Pakistan for ever. Shastri’s exhortations to the public to shun one meal was so influential that even hotels across the country closed down during those times. Other noted contributions of Shastri include blocking the forced adoption of Hindi as the official working language, and India’s first Integral Coach Factory that ushered in self-reliance for Indian Railways. Modi has a lot to learn from Shastri when it comes to agricultural success and how to deal powerfully with Pakistan and China.

Indira had served as Chief of Staff at Nehru’s PMO for long, and had an offer from then Congress President Kamraj to take on the mantle of PM immediately after Nehru’s death. Instead, she chose to be a Minister under Shastri. Though not as uncontroversial as Nehru or Shastri, this first and only lady PM’s achievements would be difficult to surpass for any gentleman PM past or future including Modi. Her greatest achievement was dividing Pakistan forever into Pakistan and Bangladesh, and thereby ending the enemy’s all encompassing presence from West and East. That is how India emerged as the undisputed military power of the sub-continent. An equally powerful move by Indira was to authorize the development of nuclear weapons to counter China’s nuclear capabilities. She gave the authorization in 1967 and by 1974 Pokhran was ready, stunning China, Pakistan, and even USA. On the economic front, Indira’s greatest successes were the nationalization of 13 major commercial banks and the nationalization of the foreign oil companies to form Indian Oil, Bharat Petroleum, & Hindustan Petroleum. While the former was designed to take financial inclusion to a new level, the latter was her bitter response to foreign oil companies’ unacceptable stand of refusing fuel to Indian forces during the war with Pakistan. Both programs are hugely credited with fortifying Government’s presence in vital sectors like banking and petroleum. Modi or any future PM could learn a lot from Indira’s stunningly bold strategies that showed to deep-trenched vested interests in the private sector what an Indian government can do.

From early on in his career, Morarji Desai was a Gandhian and one of the prominent critics of Nehruvian socialism. Despite his enormous clout in the economically right-wing faction of Congress, he was defeated first by Shastri and then by Indira for leadership in the parliamentary party. His moment of glory as PM would come after the formation of Janata Party. His lasting contributions to nation building include the conversion of India’s nuclear program to a largely civil program directly beneficial to the nation. Another major contribution was the amendments that he brought to the Indian Constitution that made it difficult for any future PM to declare an Emergency. Desai was exceptionally successful in bettering relations with both China and Pakistan. Despite being almost a capitalist, his policy to enforce MNCs to have an Indian company as partner, led to the high-profile exits of IBM and Coca Cola. But Desai was firm in his conviction that it was the best way for Indian industry. Modi can learn a lot from this fellow-Gujarati while tackling the MNCs.

Rajiv Gandhi’s achievements were dwarfed inevitably by the high successes of Nehru, Shastri, & Indira. Yet, he was the Indian PM who facilitated India’s entry into the tech league, including facilitating the first US tech firm Texas Instruments to set shop in Bangalore, as well as the initial deals of TCS-Wipro-Infosys with global giants like GE. However, Rajiv’s greatest success was his ushering in of the telecom revolution, which later inevitably led to the mobile era, much in tune with the West. It was Rajiv who also laid the foundations for the end of licence raj. The lesson from Rajiv to Modi is sweet and simple, and is something that Modi already embraces - modernise India.

Vishwanath Pratap Singh ruled as India’s PM for only less than a year, but the legacy which he left was of a longer impact. VP Singh proved that even something as huge as Reliance Industries could be tamed by a Government if it has a will. His conviction for social justice witnessed in the Mandal Commission Report implementation, and his conviction for communal harmony witnessed in the Ram Temple issue, are lessons for Modi to emulate any day.

Rao’s Ability to Launch a Revolution:

Rao is the undisputed Father of Indian Economic Reforms that kick-started growth to a new orbit. He was so revolutionary in his thinking so as to assign the role of FM to a professional like Dr. Manmohan Singh, and Rao is also credited with finally dismantling the licence raj forever. Modi would serve India best by emulating the policies of this one PM.

Vajpayee was one of the most successful prime minsters of India, especially on the economic and infrastructure front. Vajpayee’s term as PM saw the maximum achievement ever in the development of highways infrastructure, which was a prerequisite for national development. Vajpayee continued with Rao’s market friendly policies, setting the stage for a huge bull run in the market that maintained momentum even after he quit office. Vajpayee was the man who executed yesterday much of what Modi speaks of today, like huge infrastructure development, and as such it would pay for Modi to learn how Vajpayee did this magic.

There may be many who argue that Dr. Singh was a better FM under Rao than a PM under Sonia. Because, it was Dr. Singh as FM who carried out most of the modern structural reforms in the Indian economy, that opened it up and laid the foundation for robust wealth creation in its capital market. But Dr. Singh’s tenure as PM for two consecutive terms would have its fair share of successes. These include the Rural Health Mission, the Unique Identification Authority or Aadhar, the National Rural Employment Guarantee Scheme (NREGA), the Right to Information Act, Polio Eradication, and the historic Civil Nuclear Agreement with the United States. The best lesson Modi can learn from Dr. Singh is to always have an economic focus while governing this country.
Posted by Seasonal Magazine at 12:51:00 PM