It has been yet another blockbuster season for Thanjavur based SASTRA University in placements, and admissions. Sastra saw companies like Amazon, PayPal, Microsoft, Zoho, Freshdesk, MuSigma and Bosch recruiting students before bulk recruitment season starts next month.

Unlike its peers SRM and VIT, SASTRA runs no entrance test of its own, but bases its admission on a combination of the benchmark JEE-Main exam and plus-two marks, which is a very transparent process. SASTRA also doesn’t believe in university rankings by various media organizations.

Meanwhile, many of SASTRA’s faculty too have been proving their mettle on the international stage. Recently, Dr. Srinivasan Vedantham, Professor in SASTRA's School of Chemical & Biotechnology bagged the prestigious 2014 BASF Newtrition Asia Research Grant. This research grant is awarded by global chemical major BASF. BASF's Scientific Advisory Committee comprised of scientists from academia, government & industry. The awards committee selected Dr. Srinivasan's proposal for a 25000 Euros grant, together with three proposals from Chinese universities and one from an Indonesian university.

SASTRA’s philanthropic face again came out in the open with the media coverage about the Kumbakonam verdict that saw 94 students die in a school blaze in 2004. SASTRA had financed the entire studies of Madhumita, a survivor, from Class 6 to her MSc and BEd.

Growth has been so far so good at SASTRA. If you want a typical engineering college that turned into a university overnight, look no further than Shanmugha Arts, Science, Technology, & Research Academy (SASTRA) University that started its life simply as Shanmugha College of Engineering in 1984.

But so has been the majority of self-financing universities in this country, almost all of them starting their life as self-financing engineering colleges. But there has been certain differences too for SASTRA compared with the typical private universities.

For one, it is technically not a private university but a deemed-to-be university, which is a slightly elevated standing in some regards, as the status is accorded by the Central Government rather than any state government.

But so has been state-level competitors like VIT University and SRM University, and this status is really a side-effect of Tamilnadu State not allowing private universities on its own.

However, it goes to the credit of SASTRA University that they have taken this elevated status seriously. SASTRA has always tried to be a quality institution, even though the framework for a self-financing university - whether it is private or deemed - doesn’t foster a singular focus on quality.

How far has it succeeded in its quality pursuit may be open for debate. But certain quality aspects stand out.

Firstly, unlike peers VIT, SRM, or Lovely, this Thanjavur based university has not grown its admission intake mindlessly. Even now, SASTRA is home to only around 10,000 students indicating that it is not a money-making enterprise alone.

The staff ratio is also appreciable at 700 staff, in comparison with the prevailing ratio at many private universities. The infrastructure is also commendable at 30 lakh sq ft of built-up space.

Another aspect that should require special mention is SASTRA’s unique focus as well as achievements in the field of research. SASTRA has been recognized as a Scientific and Industrial Research Organisation (SIRO) by the Department of Scientific and Industrial Research, Govt. of India, enabling SASTRA to undertake research for various agencies like AYUSH, CMRI, CSIR, DBT, DRDL, DRDO, DST, ICMR, ISRO, etc.

But it is another matter that among academic research rankings based on citations, SASTRA is yet to achieve a landmark ranking, which some SASTRA scholars are attributing to a flawed metric.

The University’s patronage for the mathematical genius Ramanujan through various awards, conferences, and institutions that further research in mathematics is noted even abroad.

SASTRA also follows one of the most transparent and fair admission procedures among all self-financing universities. For instance, in their core BTech course, around 70% seats are filled on the basis of JEE-Main rankings. Which is, fair enough and transparent enough.

Industry too is taking SASTRA seriously, with one example being the recently established Microsoft Technical Services Lab inside the SASTRA campus by the software major.

On the placements front, SASTRA is a reasonable success, with the likes of TCS favouring the institution’s candidates year after year.

That completes the circle for many students and parents, as what more could they ask for? Even if they can’t get to study computer science at an IIT, NIT, or even a government engineering college, they can study CS at SASTRA and even land a job with an IT major.

Undoubtedly SASTRA fulfils that value proposition that is the basic USP of a self-financed university.
Posted by Seasonal Magazine at 8:26:00 PM 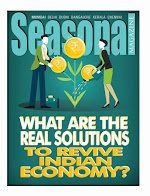