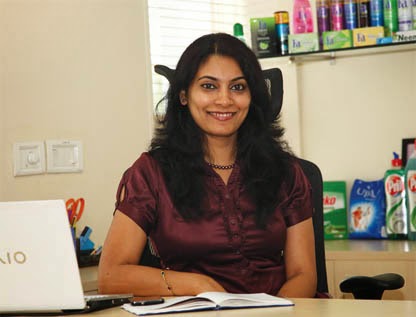 Jyothy Laboratories stock is today trading flat while Sensex and Nifty are down by around half a percent. S&P BSE MidCap Index of which Jyothy Labs is a constituent is also trading down by around 0.50%. The noted made-in-India FMCG firm’s stock has a maximum performance of nearly 75% during 2014. Seasonal Magazine spoke with MR Jyothy, Executive Director, to find out what makes the eponymous firm that she is heading, thrive against MNC majors, as well as about her future plans for their FMCG brands.

Her father is a legendary first-generation entrepreneur who turned his life-savings of Rs. 40,000 in 1983 to a Rs. 4500 crore empire by 2014. Joining Mumbai-based Jyothy Laboratories in late 2005, his daughter MR Jyothy has helped grow this FMCG firm taller, at a faster pace through her innovations. Today, this Harvard trained lady looks after super-hit household brands like Ujala, Henko, Maxo, Exo, Margo, & Pril, that are used by innumerable Indian homes.

One of the earliest and most inspiring memories MR Jyothy has about her father relates to Late Indian Prime Minister Indira Gandhi. “Girls too can achieve whatever boys can. Just look at Mrs. Gandhi, he used to say to us during our childhood,” recalls MR Jyothy, ED at Mumbai-based Jyothy Labs, to Seasonal Magazine.

Jyothy and her younger sister Deepthi are the two daughters of the legendary entrepreneur who hails from Thrissur District of Kerala. “He brought us up with full freedom, to study or pursue whatever we wished,” Jyothy reminisces. After doing her postgraduate degree in management and a diploma in family managed business administration, Jyothy joined the eponymous firm in late 2005.  She has also completed the Owner/President Management Programme from Harvard University.

But nothing could have prepared her on how to make a mark of her own in the made-in-India FMCG company founded by her father. Because, by 2005, MP Ramachandran had already proven his flair for entrepreneurial magic.

Starting out in 1983 with just Rs. 40,000 investment - his life-time savings back then - and a single product, Ujala, that was sold by just six sales girls in a single district, Ramachandran had come a long way by 2005, when Jyothy joined.

By 1997, the national roll-out of Ujala, a liquid fabric whitener, had started. 1999 saw Ujala become a Rs. 100 crore brand. The next year, in 2000, it would roll out Maxo, a mosquito repellent, and Exo, a dish cleaner. 2001 too was momentous for Jyothy Labs as it took over Tata Chemicals’ detergent plant at Madhya Pradesh and also launched Maya incense sticks.

The period from 2002 to 2005 saw more acquisitions, and launches of new brands like Jeeva, Ujala Stiff & Shine etc, and Maxo becoming a Rs. 100 crore brand.

So, by the time Jyothy joined Jyothy Labs, the firm had become a formidable place to be. And it was not only about the brands and growth. The 5000-people strong Jyothy Labs was being led by a formidable team guided by MR Ramachandran as CMD, and Ullas Kamath as Joint Managing Director.

Kamath who is a Chartered Accountant and Company Secretary, is also a qualified lawyer and has done Advanced Management Programs from Wharton & Harvard. He joined Jyothy Labs in the 90s and has ever since then been Ramachandran’s closest confidante and strategist.

Jyothy started her career at the firm’s Bangalore office, and was mentored by both her father and Kamath. And soon, proving true her father’s inspirational words about girl-power, MR Jyothy began a slew of innovations at the fast growing FMCG player.

Her first contribution was in the company’s Fabric Spa business, which is an organized laundry business based out of Bangalore, a business in which even MNCs had failed.

“One aspect that differentiates us is our hunger for growth,” says Jyothy to Seasonal Magazine. In 2007, the company would go for its IPO. And growth has indeed been in its DNA ever since. From around Rs. 80 in 2007, Jyothy Labs stock today trades at around Rs. 300.

The new Executive Director started taking active interest in bettering and re-positioning all the brands, and the results of her efforts started showing up soon. The round Exo was one of Jyothy’s personal innovations, and it went on to become a massive success in the market due to its low-wastage appeal, apart from winning some awards for innovative product design.

2008 saw the company shifting its headquarters to the new Ujala House in Mumbai. In 2010, MR Jyothy was part of the core team that roped in Sachin Tendulkar as the brand ambassador for a 2-year term. Today, the company has brand ambassadors like Madhuri Dixit, Shilpa Shetty, & Madhavan.

MR Jyothy’s latest initiative has been to focus and grow their six core brands - Ujala, Henko, Maxo, Exo, Margo, & Pril - through continuous innovations, while growing all other brands as regional ones.

An equally impressive achievements from MR Jyothy has been the re-launch of the Henko  brand detergent powder, a few months back, which has been well accepted since then.

The smaller brands that have made a  name for themselves in  various regional or state markets include Mr. White, New Super Chek, More Light, Exo Floorshine, Maya, Fa, and Neem Active Toothpaste.

“We are a true-spirited Indian company. We take pride in being Indians and being an Indian success story. Our products remain simple and is targeted towards the common Indian people. Our success is based on how we can make the common man’s life better. This is a value I learnt from my father. He would take ideas from any of our employees irrespective of their position in the company. Despite his success, he remains a simple man.”

She can surely be proud of her Indian focus, as innumerable Indian families use at least one of her products. Her sister and both their husbands also work at Jyothy Labs. MR Jyothy is also on the Director Board of the company.
Posted by Seasonal Magazine at 12:52:00 PM