Will USA Learn to Live With Resurgent India-Russia Ties? 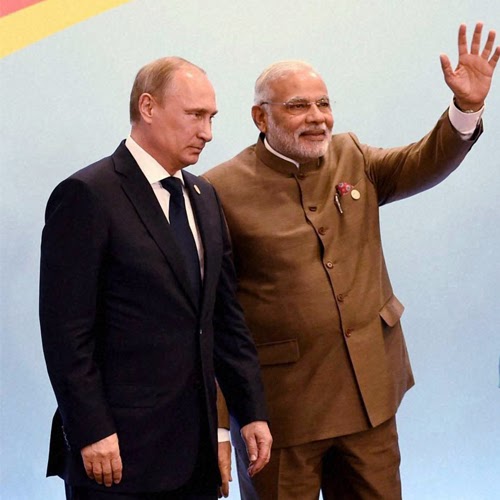 A defiant Vladmir Putin concluded his high-profile visit, which was highly productive for both Russia and India, despite America strongly objecting to India’s attitude of ‘business as usual’ with Russia. However, America is not willing to go to the extent of cancelling Obama’s visit to India, for obvious economic reasons. For now, America is finding solace in the fact that India’s objection to Russian intervention in Crimea, continues without change. Will USA learn to live with the newfound resurgence in Indo-Russian ties? It is better for US to accommodate this than crib about it, as it is dealing with India, a nation that has never crossed its limits in friendly overtures, on either side of the power equation. Moreover, for both Modi and Putin, there are not many options left to pursue development in their respective nations, other than to join forces with each other. While Putin has been forced into a corner due to the Western sanctions and the burst of the oil bubble, Modi has been finding it difficult to ink similar concrete deals with US, Japan, China, or Australia.

Narendra Modi is making rapid strides as far as India’s diplomatic relationship is concerned with most large economies of the world. Even from Canada’s Saskatchewan province to the much-disputed Crimean territory, India Inc is spreading its wings thanks to a robust foreign policy. But what is all the fuss about India having to design its foreign outreach on the basis of prevailing international situation? The issue at hand is the recent visit of Crimean leader Sergey Aksyonov as part of Russian President Vladmir Putin’s official delegation, something that hasn’t fascinated both the Ukrainian President Petro Poroshenko and Putin’s arch rival USA.

After months of military warfare and high-level meetings, the EU and US-backed Poroshenko condemned Russia’s role in the annexation of the erstwhile Ukrainian territory of Crimea, while the latter maintains that it is solely the handiwork of non-state militant separatists. Following this, local elections were held there against the wishes of Kiev with the whole exercise being termed by the West as ‘undemocratic’. Sensing Russian backing for the so-called ‘rigged’ elections, EU and US went through with the imposition of economic sanctions and practiced diplomatic isolation with the former USSR state and has since made a clarion call to all sovereign nations to ‘teach’ Russia a lesson.

Though the Crimean conflict serves as the immediate background to the East-West rift, it is imperative to go further back in time and take a leaf out from the history books. The highlight of the post-1945 global scene was the emergence of two power blocs- the capitalist state of USA and the totalitarian Communist state of USSR. Both engaged in a fierce ‘ally-making’ spree, most countries couldn’t help but take sides leading to the famous ideological Cold War politics. Meanwhile, India was still shaking off its colonial remnants and grappling with socio-economic problems like most other newly-independent countries that had just won freedom from foreign imperialism. India’s first Prime Minister Jawaharlal Nehru, however was determined to stay aloof from the temptation of joining the military blocs of the big powers and instead pursued his much-famed policy of Non-Alignment in foreign policy. Through this India responded to every global issue based on its merit rather than having to fall in line with the opinion of the Cold War superpowers, keeping in mind the necessity of ‘peaceful co-existence’ with all nations.

Despite revolutionary changes in the international situation, the broad parameters which were evolved in external affairs during the freedom struggle and in the early years of independence still retain their validity. Just like before when they referred to India’s Non-Alignment policy as ‘immoral neutrality’, USA fails to understand this even now that India won’t get bullied by external pressures.

But a closer analysis of the unfolding events makes one realize that USA is more irked by India’s defence and nuclear deals with Russia than the mere business visit of Aksyonov. Modi’s recent highly-publicized visit to the US sparked rumours that India was moving closer towards a pro-West policy, capped by his warm invitation extended to Barack Obama to preside over the Republic Day celebrations as the Chief Guest and his subsequent acceptance, making him the first US President to do so. Such a development was enough to unsettle India’s long-time friend and ‘time-tested partner’ Russia, who incidentally lost out to the US on being the largest exporter of arms to India. This was furthered testified by Russia’s historic sale of Mi-35 helicopters to Pakistan much to the dismay of India (Russia later clarified that the real intention was to aid Pakistan in it’s fight against Afghan militancy at the borders). "Even if India's options have increased, Russia remains our most important defense partner," Modi told reporters thereby allaying fears of the Kremlin currently under severe international pressure.

Interestingly the Centre has played its cards smartly in the international arena. India, which observes a policy of non-intervention, has refrained from criticizing Moscow's takeover of Crimea and support for an uprising in eastern Ukraine that has killed more than 4,300 people since April. At the same time, India has been heavily critical of imposing sanctions and withdrawal of diplomatic privileges for Russian government officials without prior approval from the Security Council of the UN. The West has also tactfully ignored Russia in the military coalition against the ISIS due to the latter’s endorsement of Syrian leader Bashar Al-Assad.

Ultimately, USA gives the impression that it desires to revive the Cold War power-politics by cribbing about and criticizing any non-EU nation establishing friendly ties with Russia and their constant ‘teaming-up’ attitude with close allies in response to Russian international posturing. Putin was left red-faced at the G20 Summit held in Brisbane after Western leaders lined up to browbeat him over his support for secessionists in Eastern Ukraine.

It is evident that US wants to forge closer ties with India, but their underlying principle of friendship is based on partake in Russian isolationism, which the latter refuses to entertain. India boasts of excellent diplomatic ties with most countries, especially Russia (previously, the USSR) with which their relationship dates back to the time when Nehru internationalized the ‘Kashmir question’ by seeking UN support for a permanent solution. At that time, the USSR was skeptical of India’s membership with the Commonwealth of Nations which they took as a sign of India being ‘still under colonial influences’ (USSR had been funding freedom struggles against colonialism elsewhere in Africa). But slowly they realized India was steadfast, though expedient in its policy of Non-Alignment and greatly influenced Khrushchev’s later principle of ‘peaceful co-existence’ during the post-Stalin era. When Nehru faced severe pressure back home for giving Pakistan a real opportunity at winning sympathizers in the UN, it was the USSR that rescued Nehru by avoiding a humiliating situation for India. Thereafter from 1955, USSR gave full support to the Indian position on Kashmir, and from 1956 used or threatened to use, its veto in the UN Security Council to stall resolutions unfavorable to India on Kashmir. Also, the USSR supported India on the integration of Goa in opposition to the US.

Thus, history provides ample examples of why US shouldn’t dare underestimate India’s indebtedness to Russia or even try to convince India on damaging Russia’s image. The fact that Russia and India are trumpeting business ties, particularly in the area of nuclear power at a time the US-India civilian nuclear deal is yet to attain fruition, appeared galling to Washington. "Our view remains that it's not time for business as usual with Russia. But beyond that, we'd have to take a closer look at what these agreements entail," said a spokeswoman of the US State Department clearly seeking clarification from India’s side.

Every country, leave alone India, should pursue an independent foreign policy and not alter it according to the whims and fancies of influential nations. For that matter, India has reservations against US military support to Pakistan but would never voice a complaint as it concerns bilateral ties between two other countries. US should respect India’s legitimate right to enter into economic partnerships with any country of its choice and refrain from dragging countries into an international issue without taking it up at the UN.
Posted by Seasonal Magazine at 6:59:00 PM