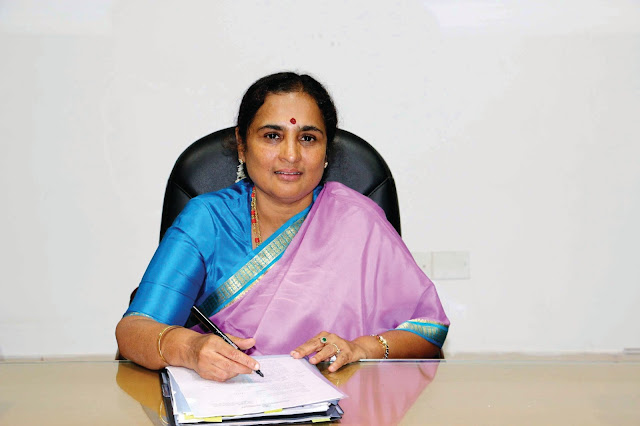 K Ratnaprabha has left her mark in all her assignments as an IAS officer so much so that acquaintances from decades ago still remember her help. Now as the Additional Chief Secretary for Commerce & Industry she is destined to leave her mark on investors too, with her central role in making Invest Karnataka 2016 a grand success. Seasonal Magazine conducts an exclusive interview with K Ratnaprabha IAS:

As the senior-most officer heading Commerce & Industries, can you brief us about the broad steps you are taking to make Government machinery more approachable for industries to submit their grievances and needs?

We have recently come out with Industrial Policy 14-19 with the following vision - To maintain an Industrial growth rate of 12% per annum; To enhance the contribution of manufacturing sector to the State GDP from present level of 16.87% to 20% by end of policy period; To attract investment of Rs. 5.00 lakh crore; To create employment opportunities for 15 lakh persons; and to create an environment to enhance ease of doing business in the State. The Policy aims at holistic development of the State and looks beyond Bangalore with equitable distribution of industries all over Karnataka. Many reforms have been proposed across major departments including online filing of combined application and approvals to facilitate ease of doing business, optimum utilization of resources, encourage vertical development in industrial area, protect industrial land, reduce inspections, enable submission of online returns etc. All these initiatives are aimed at boosting  the morale of investors.

This edition of Invest Karnataka is special in that the state is also showcasing public infrastructure projects – up to 117 projects worth Rs. 1 lakh crore in 9 infra sub-sectors – for private participation under the PPP model. How has been the initial response to this novel idea, and how confident are you regarding an eventual positive outcome, especially from overseas institutions?

Karnataka was the first State to conduct Global Investors Meet. “Invest Karnataka 2016”  is a platform is to showcase the following - The strengths of Karnataka; The investment opportunities available; The Shelf of Projects available in various Departments; Disseminate the  initiatives of “Ease of Doing Business”. We are confident that we will get positive response and IK 2016 will give the required push for investments in the coming years.

Karnataka has a stated goal of dispersing industries from Bengaluru to all suitable regions of the state. What are the broad incentives you are giving to industries to set shop in Tier-2 and Tier-3 cities, rather than Bengaluru?

The Industrial Policy 14-19 has grouped all the taluks of the State into six zones - two in ‘Hyderabad Karnataka Area’ and four in ‘other than Hyderabad-Karnataka Areas’ by taking average per capita industrial investment and per capita employment in the taluks. In Other than Hyderabad Karnataka area, Zone -1 is the most backward and covers 23 taluks. Zone-2 is more backward and covers 51 taluks. Zone -3 is less backward covering 62 taluks; and Zone-4 is developed having 9 taluks. And in Hyderabad Karnataka area, Zone-1 is most backward having 20 taluks, and Zone-2 is more backward with 11 taluks. Most backward taluks get maximum incentives and concessions and developed taluks least incentives and concessions. The incentives offered in the form of capital subsidy is almost double than the previous policies and the policy is hailed as one of the most comprehensive one and is appreciated by all. In the past one year we have seen considerable investments in Tier II cities like Mysore, Yadgir, Tumkur etc.

The state already has a head-start in sunrise sectors like aerospace, start-ups/e-commerce, and R&D. How do you plan to consolidate this momentum in the sunrise sectors, as almost all states are competing for investments in these lucrative fields?

Karnataka has the best eco system for the sunrise sector, and we have almost all the names you can recall in this sector are present in Karnataka. We are confident that we will continue to attract investments in these sectors by our inherent strengths.

While pursuing investments in some sectors like pharma and R&D, are you concerned that the high level of investment are producing only a small number of jobs? What are the incentives Karnataka is providing for attracting labour-intensive industries?

Karnataka has attracted big ticket investments from companies like Shell, Tata Power, Bosch, Scania, Asian Paints, GSK and others for new units or capacity expansions, during the past 12 months, even before the GIM plans were announced. Big ticket investments having such a need-based nature, how do you plan to leverage the momentum obtained from Invest Karnataka for the years ahead?

Yes we have these investments in the last one year. You are aware that Karnataka has an inherent advantage and is known for a congenial industrial ambience, salubrious climate, excellent labour relations and more importantly, skilled manpower, simpler regulatory processes and lower burden of compliance on investor.  With the “Invest Karnataka 2016” we hope to consolidate further.

You meet with prospective investors from across the world on a daily basis these days. What are their main issues with Karnataka – is it lack of competitive incentives, is it lack of optimum infrastructure, or is it the congestion in Bengaluru? And can you name three steps that Karnataka can possibly take within the next couple of years to make the state much more attractive for investors?

People have not stopped coming to Karnataka & no company has gone out of Karnataka. This shows the advantage Karnataka has. But we should not be complacent. We should continue to maintain the number one position and keep tackling the issues nonstop. I think “ease of doing business” is the only step which will not only maintain our top position but also put Karnataka as the most investment friendly state in the country.