Politics for a Living 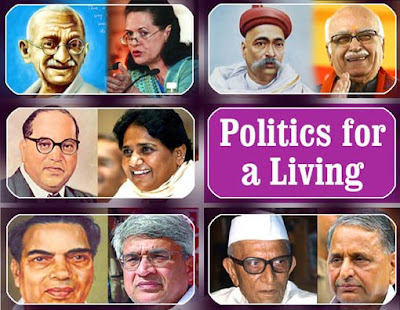 We are going to decide. Vote in once and for all, the 500 odd leaders who should lead our lives for the next five years.
There will be three-way fights at most constituencies. That makes around 1500 aspirants. And each party had to deal with at least three times as many aspirants before finalizing their list. That makes around 5000 serious aspirants. The crème-de-la-crème of Indian Politics.
Take a cursory glance at this list of 5000. What is common? Many things, but what strikes most is that most of them are unemployed. Yet, living an affluent life. How do they live?
500 of them will, anyway, go on to become MPs. Though it will be difficult to continue their lifestyle with the around 20k monthly salary of MPs, the nearly 3 lakh worth of monthly allowances, perks, & freebies should be enough for the sober among them. That is, to meet the basic expenses. To accumulate wealth, they too have to look elsewhere.
And what about the rest 4500? They will continue to live even more stylishly. Do these parties pay them regularly? Not really.
Whether it is party functionaries, MPs, or MLAs, politicians are expected to come up with their own revenue models. Party will just be a facilitator. Share the moolah with party, and party will continue to share the infrastructure with you. Politics for a living.
Are our politicians so busy with social work that they can’t earn a decent living for themselves? Gandhi was even busier with social work, but could find time regularly to earn his living by weaving khadi. Even Nehru earned his living from the royalties of his books.
When did this rot begin? Is it from Indiraji? Anyway, this rot of politics for a living has peaked in the last decade or so. The distances from Gandhi to Sonia Gandhi, from Tilak to LK Advani, from Morarji to Mulayam, from Ambedkar to Mayawati, and from AKG to Prakash Karat, are all too long.
While Ambedkar & AKG were teachers, Tilak was a journalist and Morarji a civil servant. Though all of them later abandoned their careers for social work, they had at least won their bread with their own hands for some years. Their current day successors, unfortunately, can’t stake such a claim.
Forget working with their own hands, how many of these leaders or any among these 5000 aspirants have travelled in a public bus, a second-class compartment, or an auto-rickshaw during this past one year? If anybody has, we should elect him or her. Because, only they will understand what all of us do everyday – keeping a regular job, running after buses and trains, and eating from roadside eateries.
Those who use politics for a living will never understand how we live.