The Toss that Caused Chaos 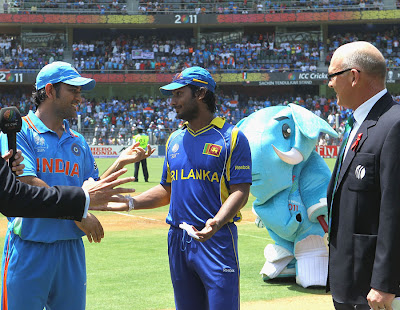 Every World Cup Final has had its share of history but this one takes the cake. The toss debacle featuring Sri Lankan captain Kumar Sangakkara and his doppelganger MSD will go down in history as a sporting absurdity and has evoked extensive appraisal on the former, being tagged as a skulduggery.  And that it’s an incident in a world cup final makes it an even more sought-after episode for a bunch of  no-loss, no-gain speculators .

If this one involved confusion, then the 2007 WC Final succumbed to sorrowful memories with a blackout at the stadium where the final had been taking place. The only connecting-link between both these finals was the involvement of the match referee, Jeff Crowe. His folly has been played down by India which is basking in glory, but if  Lankans were to go home content, then Crowe would have  ended up in an Indian potpourri.

Crowe’s blind eye leads him to call for a re-toss after reports that he failed to hear Sanga’s tossing decision.  The coin came down with heads facing up and Sangakkara claimed to have called heads but his Indian counterpart MS Dhoni seemed to believe that he had not. With Crowe uncertain, he decided to toss again and Sangakkara correctly called heads and elected to bat first.  It seems Crowe didn’t comprehend the Lankan skipper’s call because of the crowd-noise and suggests that he wasn’t audible enough. The sheer element of a world cup finale played down between two hugely-favoured, powerful outfits may have got the better of  Jeff Crowe.

However, Sanga will be pin-pointed only because of his audacious but shameful act that meant Lanka won the toss and possibly the match. In spite of his  blankness about the incident, Sangakkara looked a tensed and strangulated figure amongst the 22 players. Glimpses of Harbhajan taunting Sanga meant that the Indian team wasn’t too jubilant about the debacle and Sanga was mentally targeted. He had that conscience of guilt printed on his face and that apparently cost the Lankans the match. He resembled a Judas Iscariot for his palpable act of  treachery to the game of cricket. On Saturday, Sanga pictured himself more like a goose that was to be butchered than a skipper of the Lankan Lions.

The witty, confident Sangakkara we know of was portrayed as  a piece of shattered glass that couldn’t be assembled and helplessness was written all over his face once he realized the match was slowly slipping out of hands. More so a captain, Sanga largely depicted a wicket-keeper doing his job behind the sticks rather than marshalling his force at each interval. Certainly, the toss had taken a toll on him and India capitalized on this and from then on Sri Lanka had no hopes of a comeback.

But what the heck was Dhoni doing? Smiling gleefully as if he had won the world cup, little knowing that he has just been outwitted. If Dhoni wanted to win the toss badly, he should have raised an issue when referee calls for a redo. Ravi Shastri was rehearsing on the verses he would be saying once the toss is made. But, he too must have opened his ears to what was taking place on-field. Perhaps the only one who can escape blame would be Stumpy, the elephant mascot for the 2011 Cricket World Cup, who couldn’t even eavesdrop on the happenings. It was like a slapstick comedy, only that the whole scene was a serious one.

If it had been Ponting in Dhoni’s place, the match-referree would have taken a beating. And if it had been Ganguly , the match might would have been called off.  His dumb luck going into tosses prompted experts to say Dhoni has missed a trick by agreeing to a second spin of the coin. But, one won’t question him now as he has provided a fitting reply by ensuring the toss had little impact on his team’s performance.

Host broadcasters EPSN-Star insisted afterwards that Sangakkara had audibly called heads the first time, but Sky and BBC begged to differ. Michael Vaughan, covering the match for Test Match Special, tweeted: “Sangakarra has stuffed Dhoni. He shouted Tail in the 1st toss and lost it. You can hear it in on air.” It's possible that only Sangakkara will ever know for sure, but the scale of the controversy has died down with India scripting a historic win. Now, we understand how winning the toss can backfire on a team and India profited from this transgression of cricketing stupidity.
Posted by Seasonal Magazine at 4:39:00 PM