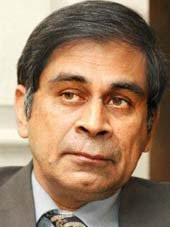 Central Bank of India has been hit somewhat by the economic downturn, but the bank which is noted for its customer-friendliness and social commitment, is banking on these very factors to survive and thrive in 2009-10. Seasonal Magazine gets answers on Central Bank’s challenges from Chairman & Managing Director S Sridhar.

Though annual growth in profits has moderated to just 3.8%, Central Bank of India continued to put up impressive growth in total business, above 18%, in 2008-09. This growth is not bad considering the little room that exists for growth – at nearly 3500 branches and 2.5 crore customers, Central Bank is already a banking behemoth.

Due to the downturn, there was also a significant drop – more than 50% - in standalone net profit for the last quarter.

But Central Bank of India hopes to reverse all these with its customer-centric policies, mass banking initiatives, and RBI support.

Central Bank’s top management comprises of its Chairman S Sridhar, and Executive Directors Ramnath Pradeep and Arun Kaul. CMD S Sridhar was earlier the Chairman of National Housing Bank, and has chalked out an ambitious plan to double Central Bank of India’s customer base to 5 crores.

The Cent Kisan Gold Card from Central Bank of India (CBI) provides a credit limit up to Rs. 10 lakhs against land for a five year term at interests that start from as low as 7%. Farmers can avail this for both farming and no-farming activities.

Central Bank is planning an innovative route to tackle underperforming loans in the commercial sector – by bringing in Private Equity (PE) funds with investment and management skills into these units.

The SMS alert facility is available for all Central Bank savings account holders for transactions of Rs. 5000 or more, as well as all fixed deposit customers, and will be available across the 1200 Core Banking Services (CBS) branches of CBI.

After a lull in recruitment for several years, Central Bank of India is now active on the recruitment front to drive growth as well as to bring down the average employee age. The new recruits will join a nearly 40,000 workforce, a quarter of which comprises MBAs, CAs, & LLBs.

Central Bank has always been noted for its social commitment, and the new initiatives also reflect this. It has tied up with Ahmedabad Municipal Corporation for development of low-cost housing units, for which Rs. 120 crores has been sanctioned towards loans at subsidized interest rates.

In tune with the Government’s vision of making banking more accessible to minorities, Central Bank of India has opened 40 new branches in minority concentration districts of the country, and has come up with top honours in this regard – second only to State Bank of India (SBI).

Chairman of Central Bank, S Sridhar is known for his proactive participation in forming public policy, and his recent cautionary remarks on the move by a section of the real estate industry to hike prices, gathered popular support. Sridhar termed the move short-sighted and explained that the time was ripe for a recovery only if the real estate prices adjusted a bit more downwards or at least stabilized.

The Mumbai headquartered Central Bank of India’s loan portfolio has a significant 18% exposure to agricultural loans, ahead of many of its peers. However, there is risk too from this kind of farming-friendly policies. Banks have been forced to waive farm loans, but so far they have been compensated for only 32% of the waivers; for the remaining, it will be a long wait of another two years.

It is not only in agricultural loans, that the bank shows its customer friendliness. Even in a difficult year like 2008-09, Central Bank was ranked as the ‘Best Education Loan Provider’ and the ‘Second Best Home Loan Provider’.

Central Bank of India was also quick to offer home loans at a fixed rate of 8% to tide over the current crisis in the real estate market.

Despite Central Bank of India’s stock not coming up with an impressive performance in the stock market, the bank is mulling a right issue or a follow-on public issue this year to raise capital.

Central Bank’s recent move to sell off Rs. 102 crore worth of Non Performing Assets (NPAs) will largely be from their corporate loan book. Unlike many other banks, CBI is still hopeful of Asset Reconstruction Companies (ARC) to manage their NPAs.

The financial health of Central Bank of India needs improvement as it is challenged on both the Net Interest Margin (NIM) front and the NPA front, when comparing with RBI guidelines.

Serious concerns have recently been raised about public sector banks (PSBs) resorting to mass restructuring of loans - in response to an RBI directive – but which might have temporarily cleared NPAs from their balance sheets. A small percentage of restructured Central Bank loans might also fall in this category.