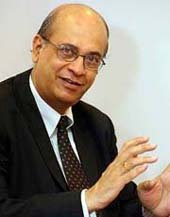 Indian Overseas Bank had a difficult 2008-09, which it doesn’t want to repeat this fiscal. Major measures are now on to tap lucrative overseas markets like Malaysia, focus further on its creative business of film-financing, toughen its battle on the NPA/NIM fronts, and solidify its reputation of reliability with a 3-Way Disaster Recovery facility. Seasonal Magazine gets inside IOB through an interview with Chairman SA Bhat.

Indian Overseas Bank, the Chennai headquartered public sector banking major is now just 50 short of 2000 branches, with a business mix of 1.75 lakh crore. Under Chairman & Managing Director, SA Bhat, IOB is taking the challenging year of 2009-10 head on, with a lot of innovative measures.

Combining its might with fellow banks, Bank of Baroda (BoB) and Andhra Bank, Indian Overseas Bank is starting a new banking subsidiary in Malaysia this year. It is also applying consortium-finance together with Exim Bank to fund a mega movie – the Rs. 70 crore ‘De Dhana Dhan’ starring Akshay Kumar and Katrina Kaif, and directed by Priyadarshan. Earlier IOB had financed the Rajanikant starrer ‘Sivaji’ which went on to become the highest grossing Tamil film ever in history.

When banks collapsed one after the other in US, the government there had turned to some of the most reliable banks like JP Morgan Chase and Bank of America to save them by mergers. A similar situation had arisen with Pune-based Shree Suvarna Sahakari Bank (SSSB) three years back, and it was Indian Overseas Bank that Government of India chose to take over SSSB. On 20th May 2009, IOB wound up the protracted steps of takeover, and the SSSB branches became Indian Overseas Bank branches. Everyone in the banking industry expected customers of SSSB to rush to IOB on day one to claim their deposits which had been frozen for three years. But it was the reverse that happened. The SSSB branches of Indian Overseas Bank attracted new deposits worth Rs. 6 crore, 1000 new accounts, and renewal of 10,000 fixed deposits, all in just the first five days of operation.

Indian Overseas Bank, though a moderate performer in the stock market, has garnered recent attention with LIC buying nearly 50 crore worth of IOB shares. Chairman SA Bhat has been a Bank of India (BoI) veteran, before moving on to UCO Bank as its Executive Director, before taking over IOB’s reins in June 2007.

What prompted Indian Overseas Bank to go for a new banking subsidiary in Malaysia this year? And why is it a joint effort with two other banks?

Overseas expansion is expected to be a major growth avenue for Indian banks this year. Malaysia was a natural fit as the country has a significant ethnic population of South Indian origin. Indian Overseas Bank being headquartered in Chennai, has a natural flair to address these customers of South Indian origin in Malaysia. We already have a smaller presence there, the feedback from which was promising. Coming to the second part of your question, the main reason for a joint effort with Bank of Baroda and Andhra Bank was as a means to manage the high costs of setting up a bank there. This way, each of us can bear the required capital load better.

IOB has always been a moderate performer in the stock market. With LIC recently taking up Indian Overseas Bank shares worth Rs. 50 crore, do you expect a better positioning?

I wouldn’t agree that IOB was always a moderate performer. But, yes, the scrip encountered some problems when a foreign institutional investor (FII) offloaded his 10% stake in the bank. Now, that is what we call a huge volume sale, and it reflected in the scrip’s further performance for some months. But soon other investors realized that that sale was a one-off case, and that the IOB stock is basically strong. As of LIC taking a significant stake, I would say that it has been good for them as they could buy IOB cheap, and now it is soaring.

Financing movies are not something new to Indian Overseas Bank, as you might know. Our movie finance portfolio includes Tamil hits like ‘Sivaji’. But our exposure to Bollywood has been rather limited. However, we are confident on this front as there is a due diligence that is followed in selecting the right project. An IOB panel examines aspects like the producer’s and director’s track record, who all are starring in it, and other factors. For example, ‘De Dhana Dhan’ is by Priyadarshan and stars Akshay Kumar and Katrina Kaif, which shows it is an ambitious project. And even if a movie doesn’t do as well as expected, the bank is covered by way of primary security and collateral security. The primary security is the rights (prints) of the movie, and collateral is something unrelated like property etc. I think that film financing is just another arm of conventional financing that can be highly prospective if done correctly. It is just a case of matching the risks and rewards. See the case of ‘Sivaji’ that Indian Overseas Bank financed. This Rajanikant starrer went on to become the highest grossing Tamil film ever.

By registering just 10% growth rate in fiscal 2008-09, IOB has become one of the slowest growing banks in India. How do you plan to overcome this challenge?

When you say 10% growth rate, please remember that it is only in profits. Because, Indian Overseas Bank’s overall growth rate was much higher, much in tune with the industry. On the profit front, yes, we were hit due to the economic downturn, NPAs, and other factors. We need to work more on our margins. But overall we are confident. We play the game systematically. IOB won’t be like some aggressive banks who grow at 40% one year, and struggle with 0% growth the next. We prefer to grow with the industry.

On the loan front, is Indian Overseas Bank battling low demand for high-quality loans? Recently, you had opted to part-finance the beleaguered Jet Airways to the tune of hundreds of crores. Not many banks were willing for the risk…

I don’t agree that IOB is facing a dearth of high-quality loans. Due to the economic downturn, maybe, many conventionally good loans have turned riskier. And I don’t agree that many banks were unwilling to take risk with Jet Airways. In fact, Indian Overseas Bank is not going on this alone – a consortium is funding Jet. I agree that the element of risk is there. The airline industry is down and Jet is also struggling with the industry. But at IOB we have faith that both will bounce back. As I told you, it is a matter of balancing risks with rewards. Without such risks our Net Interest Margin (NIM) will continue to suffer.

How do you assess the financial health of IOB vis-à-vis its peers? Very few banks are challenged like Indian Overseas Bank on both the Net Interest Margin (NIM) front and the Non Performing Loan (NPA) front?

Well, our NIM has improved to 2.84% which is not as bad as you think. I think that it might improve even more to reach 3% this fiscal. But on the NPA front we have suffered a lot during the past year. That is where the downturn hit Indian Overseas Bank hard. But we are systematically tackling this, and you can expect a significant change next year.

Serious concerns have recently been raised about PSBs resorting to mass restructuring of loans to temporarily whitewash Non Performing Assets (NPAs) from the balance sheet. Won’t they come back to haunt you in the next balance sheet? What is Indian Overseas Bank’s take on this?

I feel that such assessments are not entirely true. As far as Indian Overseas Bank is concerned, we have never mixed up these two issues – restructuring and NPAs. When the going got tough for many companies this year, we too went for loan restructuring as per RBI guidelines. Each case was assessed for their current problems and future viability. IOB believes in all our restructured loans, that they can rebound once the economic situation in India and the world improves. Only where we have no faith left, have we classified as Non Performing Assets (NPAs). It might be easy to brand something an NPA. But as socially responsible bankers, it is our duty to ensure that all viable companies and feasible loans are supported. Because, even though they might seem private projects, they are national assets when we take into consideration factors like their employment potential. It is Indian Overseas Bank’s duty to ensure that they succeed and not fail. Restructuring is a tool to help them bring back to viability as soon as possible.

But the temptation is always there, isn’t it – to classify some NPA-class loans as restructured loans to bring down the NPA numbers?

Well, if that is the case, why should I declare these much NPAs as we have done? IOB doesn’t resort to such tactics. We are very transparent.

Do you mean to say that you don’t expect none of IOB’s restructured loans to come up as NPAs next year?

Yes, we don’t expect that, because we will work with them towards that end. But as you can imagine, we should also expect a tiny percentage of them not making it due to now unforeseeable factors.

Regarding NREG, I wouldn’t like to comment. About your first question, yes, when a loan waiver is in place, the government would compensate. If we had got the full compensation, what you had said would be correct. But it is not the case. I think at IOB the compensation stands at around 10% now. That means, if we had lent Rs 500 crores for agriculture, we have been compensated for only Rs 50 crores until now. When the full compensation arrives, yes, it will help our numbers.

Indian Overseas Bank has recently commissioned a second disaster recovery site at Hyderabad. Can you explain the need for this facility?

Yes, IOB has become one of the few banks in the country with a second disaster recovery site. It is a major step in the 3-Way Disaster Recovery set up we were implementing. Under this, we have a Primary Data Centre (PDC) and Command Centre in Chennai at different sites, and a Disaster Recovery Centre hosted at Hyderabad. Using technologies like auto fail-over and asynchronous replication, Indian Overseas Bank will ensure business continuity and uninterrupted service to our customers.