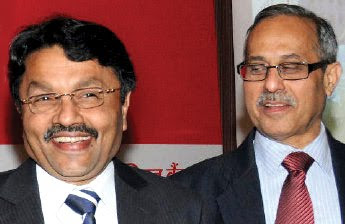 Union Bank of India’s campaign ‘Your Dreams Are Not Your Alone’ was perhaps the most catchy bank promotion in recent times. However, it was not the only strategy Union Bank – led by veteran banker MV Nair - copied from India’s private sector banks like ICICI Bank, HDFC Bank, & Axis Bank. But has it really worked for this Mumbai headquartered public sector bank (PSB)?

ICICI Bank, Indian banking's leader in promotional campaigns, has cut their advertisement expenditure by one-third ever since the downturn began. But it was also a time when a few public sector banks, notably State Bank of India (SBI) and Union Bank of India (UBI) hiked their advertisement spending. Union Bank’s was the sharpest increase in ad spend, going up by almost thrice over the previous year.

Union Bank of India also seems to be following some of the strategies that ICICI Bank pursued during the last boom and later discarded – like growing their Point of Sale (POS) business astronomically and providing retail / vehicle loans to non-customers.

On the recruitment front, Union Bank recruited 2200 employees during last year, and this year plans to take in around 2000 – much like how private banks like ICICI Bank, HDFC Bank, and Axis Bank were doing. But with no performance-linked pay structure in place like these private banks, and the retirement-to-recruitment ratio being 3:1, the need for such a move is difficult to rationalize.

The complex effects of Union Bank of India’s promotional campaign – that amounted to Rs. 142 crore in 2008-09 - are now unraveling with the latest quarterly results. On first look, the headline profit growth of 94% shows that the campaign has clicked. Even some constituent figures like the substantial growth in fixed deposits may be an outcome of this aggressive campaign.

However, on a closer look, many other constituent figures are troubling. The fact that Union Bank could post only a 1.52% growth in net interest income shows that something went wrong in their core business of deposits and advances. On the other hand, the most promising component in the results – doubling of non-interest income including treasury – had nothing to gain from the promotional campaigns.

Even the rise in fixed deposits might have complex aftereffects. Union Bank of India’s cost of deposits has increased to 6.47% due to this major focus on fixed deposits. At the same time, the bank’s Net Interest Margin (NIM) is down to 2.29% from 2.92% last year, with pressure coming from these high-cost fixed deposits that will take time to mature. Now, the bank faces an uphill task in raising NIM to a healthy 3%.

At the same time, despite this heavy promotional campaign, the bank could not perform well on the low-cost current account / savings account (CASA) deposits, and now Union Bank has to struggle to bring CASA to 35%, something which might take until 2012.

The bank which has always performed well on the NPA front, however, saw net non performing assets (NPA) going up by 0.57% during last quarter. But this might have to do with Reserve Bank of India (RBI) rejecting a proposal from Union Bank of India to deduct floating provisions from gross NPA. The reason for the RBI rejection is not clear, as similar proposals from peers like Punjab National Bank (PNB), Bank of Baroda (BoB), and Central Bank of India were allowed.

Post-budget, the outlook for treasury gains is bleak for all banks. This is said to be especially so in the case of Union Bank where loan growth is relatively low and treasury portfolio is high. With treasury income being their mainstay during the last quarter, the bank needs to think of other sources for showing profit.

With parking surplus funds in liquid and liquid-plus mutual funds (MF) not going to be viable after around August 2009, Union Bank will be forced to increase lending, but in the face of lackluster demand. MFs was one area where Union Bank of India could register good profits.

Even while bigger players like SBI decided to keep off, Union Bank participated in the consortium funding Air India / NACIL. Now with Air India in deep trouble, the decision seems badly made.

After a good performance in the bourses for some time, Union Bank of India has now started appearing with ‘SELL’ recommendations due to poor short-term prospects.

Like many other public sector banks (PSBs), Union Bank too might have surprises from their restructured loan book in the coming quarters.

Maybe Union Bank of India needs to learn more lessons from ICICI Bank which has discarded brand promotions and is now resorting to Customer Education type of promotions. Also, there seems to be no point in Union Bank adopting aggressive business policies discarded by private sector banks.