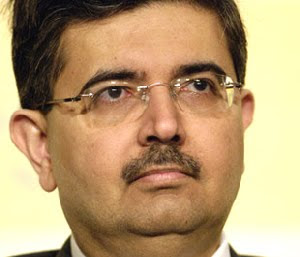 Group entity Kotak Securities had recently played whistleblower in exposing accounting holes in both Reliance ADAG and Reliance Industries. But as and when the Ambani brothers bury their hatchets, a headache can break out for Kotak Mahindra.

But for all his team’s research capabilities, Uday Kotak couldn’t sense what was in store in Dubai. Kotak Mahindra Bank opened their representative office in Dubai two weeks back. The timing couldn’t have been worse. A week later, Dubai World’s $60 billion hole surfaced, with the potential to sink Dubai with it.

But risk is nothing new to Kotak Mahindra. The Group already has exposure in Dubai through businesses like insurance policies, offshore mutual funds, broking revenues, and other investments.

Uday Kotak has ambitiously built this 18,000 people empire, resorting to corporate moves like courting powerful names like the Mahindras and Goldman Sachs, and later deciding to go it alone.
Posted by Seasonal Magazine at 9:27:00 AM