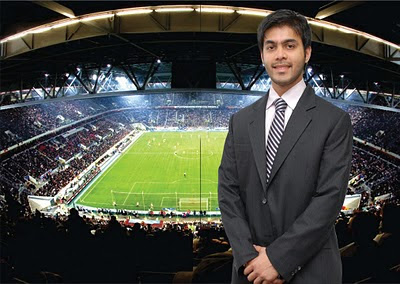 You have heard about all kinds of summits, even summits for sports development. But here is the first one on stadiums. Not really, it is for the greater cause of sports development itself, but the route chosen is through stadium development. As the saying goes, build it first and then they will come. A visit to any of the public stadiums in our metros would confirm this. Stadiums cramped with joggers, walkers, shared between half a dozen sports, and not to speak about the dozens of cricketing nets by at least two different academies. Doesn’t a nation of billion needs at least 1000 stadiums, one for each 10 lakh people? But in a nation with pressing problems from poverty to drinking water, sports and stadiums often get relegated as the last priority by the Governments, except during occasions like Asiad or Commonwealth Games. But sports has a greater role to play in nation building, even in poverty alleviation, as sports defines a nation’s culture, its passion. Close your eyes and imagine an India without cricket. The only solution to the vexing challenge of sports infrastructure is public-private-participation. Now, here is a prophet and a summit for this cause – SE TransStadia and India International Sports Summit 2010. Their first stadium, the brainchild of MD & CEO Udit Sheth, is a PPP project with Gujarat Government at Ahmedabad. A first-of-its-kind stadium, not only in India, but the world, this Rs. 300 crore multi-purpose stadium can host ten different sports. But the real stunner in the stadium will be its convertible design, that can convert this outdoor stadium into an air-conditioned indoor one, at the switch of a button, in less than six minutes. For this technology, TransStadia is partnering with UK’s StadiArena, which has the patented technology invented by former English Premier League footballer Paul Fletcher. The inaugural India International Sports Summit 2010 scheduled for 24th & 25th March at Trident, Nariman Point, would bring together Indian and international personalities from government, sports, sports management, sports journalism, and other related fields, and is backed by almost all the national level sporting bodies. TransStadia is promoted by Mumbai based Setco Group with international operations in the automotive component sector.

Seasonal Magazine in conversation with Udit Sheth, MD & CEO, SE TransStadia, on the Summit and the company’s upcoming stadiums:

For our readers’ benefit can you explain what TransStadia and this Summit are all about?

Well, I would say let us not mix up the two. TransStadia and the India International Sports Summit are two different concepts. We at TransStadia are into sports infrastructure management. This inaugural summit that we are promoting and sponsoring is towards the greater goal of sports being acknowledged as an industry, for the greater good of sports itself.

Can you detail this sports-as-an-industry concept?

Sure. For sports to be considered as an industry, we should be able to monetize sports. For this, we at TransStadia have identified a three-pronged strategy. Firstly, there should be education in sports. The currently available sports education is a marginal or a fringe affair. That should change, and major sports items should be made available as subjects from the school level onwards. Secondly, sports infrastructure development through public-private-participation should be pursued as it is perhaps the only viable, sustainable model for this. Thirdly, we should have sporting packages or events much like IPL, where all the above factors come together to be monetized. Lastly, all this should be for the greater good of sports. I think that should explain the concept behind this Summit.

But won’t this sports-as-an-industry concept corrupt pure sports, and make it more like any other industry?

Not at all. That is a misconception many among us carry. If you look at the international scene, you can easily see that all the thriving sports items are the best monetized ones - be it football, basketball, cricket, or tennis. International sporting bodies like FIFA, NBA, & ICC have all woken up to this fact long ago and have modelled their activities as an industry. On the other extreme, take the case of our athletic team members. They have to find a separate career to survive, which will remain a constant headache. If sports is a healthy, thriving industry, this industry will take care of all the participants. This is the message we are trying to put across through the Summit, and we hope that through extensive discussions, clear roadmaps for this would evolve out of this.

What will be the Governments’ role in the Summit?

As you would appreciate, as the apex decision making bodies, our governments should play the most critical role in choosing this sports as an industry concept. That is why we have invited legislators, especially those who are young and much in tune with sports to this Summit.

TransStadia’s chosen sector, Sports Infrastructure Management is a relatively new area as far as India is concerned. But with the recent announcement of Reliance Industries, the country’s largest industrial group setting shop in this sector with world leader IMG, do you think the sector is going to be in limelight?

Definitely. I think that this news, of Reliance partnering with IMG, is great for the whole sector of sports infrastructure. For a pioneer like TransStadia, it further vindicates our stand that sports can be considered and treated as an industry for the greater good of sports. That the country’s biggest industrial group considers this as a growth area is encouraging. But they are not alone in this. The Mahindras, and many others have already become active in this sector.

For your flagship Ahmedabad stadium, we understand that you will be using StadiArena’s convertible technology. What about your subsequent stadiums?

For all our stadiums, we will be implementing this outdoor-to-indoor convertible technology. That is the decision as of now. Because what we are proposing is not just another way to build stadiums, but another way for stadiums to be sustainable. This technology is about viability, sustainability.

But that also means that if a state government or a local administration is not keen on having this technology, you will lose out as a stadium developer…

Well, let us put it another way. Our technology is not about new stadiums alone. This can also be used for complete makeovers of existing stadiums. So, we are basically addressing a huge market.

So, what will be TransStadia pushing primarily – this convertible technology or stadium management?

In fact, both. And we believe that both these goals are synergistic. But if a certain administration would rather have the convertible technology and not our management, we might even be willing to licence the technology to them. We will have to look at it at a case-to-case basis. But for us to manage a stadium, this convertible technology would be needed.

Can you explain what this convertible technology is all about in simple terms?

Sure. Conventional stadiums are either outdoor or indoor, depending upon the sporting items for which they are designed. An outdoor stadium may have part of its seats covered from the sun or rain, but almost never will they be fit for indoor sports. TransStadia’s stadiums will basically be outdoor stadiums, which can be converted to indoor ones at the flick of a button. By indoor stadiums we mean climatically fully sealed ones, complete with air-conditioning. They will also be adaptable for ten different sports, including most indoor ones like basketball, badminton, volleyball etc.

This sure sounds like something big. Who developed this, and will you have exclusive rights to this technology in India?

Yes, this is truly big as far as sports infrastructure is concerned. The beauty is that this transformation from outdoor to indoor can happen within six minutes. The technology was developed by former English footballer Paul Fletcher and is commercially developed and marketed by UK’s StadiArena. In India, we would be the exclusive partner promoting the technology.

Your first project, the one in Gujarat is a PPP one. Will this be your exclusive development model?

Yes, as of now, that is our sole intention. Developing a stadium is a resource intensive activity, not only in terms of the money involved, but in aspects like availability of land, the statutory permissions, licences etc. So we need to have a strong public partner for the project to succeed and be useful to the public.

Can you roughly put the break-up of the Ahmedabad project? What will the Government bring in and what will you?

Well, the Government will only supply the land required for the stadium. We will bring in the technology and it will also be up to us to raise the 300 crore needed for the project.

What will be the capacity of this stadium? Will it be fully convertible?

The outdoor stadium will have a seating capacity of 30,000 out of which a select area of around 7500 seats will be the convertible region to an indoor arena.

It won’t be the biggest of stadiums, yes, but it will be very flexible. We will be able to host ten different sports items there, including indoor and outdoor ones. Both the outdoor and indoor seating capacities are kept reasonable so as to ensure optimum utilization.

Can you explain this utilization concept further?

You see, the biggest problem with stadiums is not building it, but commercially using it regularly so that it can be sustainable. This is why rich nations like US demolish stadiums after events like Olympics, while poorer nations like China and India hold on to them even after events, but only to run into viability problems. Our solution for this is not only to host ten different sports, but to host entertainment events and corporate / family functions. Both the outdoor and indoor capacities are kept optimum keeping in mind these flexible uses.

What will be the annual numbers you are looking at in the stadium business?

Since this is a new concept, we have kept a modest target of one or two stadiums per year. But if we get more makeovers of existing stadiums, the numbers can go up.

Who will be building your stadiums? Are you planning to do it on your own?

No, of course not. Development and construction are not our core strengths. We will be commissioning developers and contractors for the construction. We will focus on the concept, PPP, design, fund raising, and most importantly running the stadiums as a viable commercial model.

Apart from stadiums, is TransStadia planning any other sports infrastructure activities?

We are also interested in creating unique sporting academies, and have already identified some viable models for this.

Apart from Gujarat government, where all have you made progress in negotiations? With the Commonwealth Games happening this year, do you think you missed out an opportunity in Delhi?

No, we started out only in 2008-09, and as such couldn’t target Commonwealth Games at all. But Delhi Government is one administration with which we have made some headway for future projects. Anyway, our technology and management model is not suited for one-event stadiums, but for perpetual projects. We are talking with most state government and city administrations for this model.

Will you be doing your part in pitching for Asiad, Olympics etc?

Definitely. It is, in fact, one of the goals of the Summit. A concerted effort from the public and private players is required for such mega events to come to India.
Posted by Seasonal Magazine at 4:10:00 AM