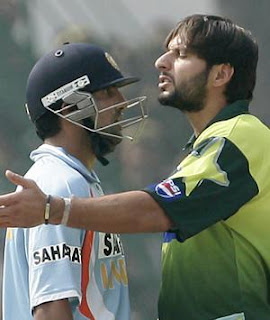 This one isn’t for the faint-hearted. A match tipped to be the greatest ever played between the two arch rivals, has already been in the limelight for it’s high-volatile atmosphere, both on and off the field. When India’s man of the moment, Dr. Manmohan Singh meets his counterpart, the two cricket-mad nations will lock horns in a mouth-watering clash, where only  the fittest will survive.

Little does the Indian nation know that this Pakistani outfit aren’t pushovers. The team that absorbs pressure the best will emerge victorious. This will go down as a match where there will be no room for error and where the emotional aspect comes into play.

Both teams are on the backdrop of remarkable victories thereby making this encounter a must-witnessed one. The pre-match pressure has been enormous and the whole nation has taken this match into deep patriotic feelings.

But the sorry part is that only one will rule the roost and the other will face extreme humiliation and a breakdown of tears. Such has been the build-up to this much-anticipated clash between two cricketing giants having the political and geographical scenario between the two well etched in one’s mind.

But what makes this ‘once in a life-time match' so watched out for? Definitely because it is an Indo-Pak match-up and the thrilling part being that it is a serious World Cup Semi Final showdown. Wednesday’s clash is destined to become an opportunity for one of the two teams to retain the support of fans after their disappointing exits in the previous World Cup.

By far the best match yet, India will have to buckle up their resources in order to put brakes on a rampaging Pakistani team. Uncertainty in result is the key feature of this game. However the hope is that it doesn’t turn out to be a damp-squib and that there will be a fighting effort from both sides. A possible shock news headline looms large and both would like to ensure that the other will face some amount of competition, if not better.
This time around, possibly, India will face the heat especially because of the fact that Pakistan is fine-tuned in all their departments. If India wants to escape casualty then the following areas need to be pondered upon:
The Afridi Factor
Arguably, he has been the best performing captain in this world cup indicated clearly by his wicket tally (21), the most by a bowler as yet. Added to that his creativity in leadership and gambling nature makes him a potent force to deal with. His quickish, fiesty leg-breaks have been the nightmares of many a batsmen and his uncanny knack of picking up wickets when the situation demands, instills fear even  amongst the best in business. Shahid Afridi has been the binding force behind the team's overall success. He will be a hard nut to crack.

Pakistani spinners are spin wineers, very much in contrast to the performance of the Indian spinners. While Pakistani tweakers have come to the fore with match winning credentials, their counterparts are struggling for wickets even on helpful sub-continental turf pitches. Afridi, Ajmal, Rehman and even part-timer Hafeez have been among the wicket-takers, while India can only boast of the best bowling figures for them and that too by a non-regular, Yuvraj Singh.

Not one bowler, not even the Lee’s and Steyn’s , have used the swing to good effect like Umar Gul has. A strike bowler of his nature has the ability to swing the bowl both ways and is a brilliant exponent of reverse swing and toe-crushing Yorkers. Indians may find it tough to come to terms with his bowling largely because now Gul is a changed and consistent bowler which was not the case a year or so back.

Yes, this is very much true. Pakistan has put up stellar performances than India in this WC edition. Their complacency may get the better of them, take the example of their group match against New Zealand where they squandered a potential victory and proved their 'unpredictable' tag right. But the way they fought back with convincing wins over Australia and West Indies makes them a dominating unit and they will be hoping that their unpredictable nature goes their way.

A Pakistani victory will be a fitting to their horrific political and economic condition back home and being the only team to be stripped of international match rights they would want to prove a point that cricket is there to stay in the terror-struck nation. An unstable political environment has resulted in a  negative impact on the sports field with the cricketers getting into all kinds of controversies and allegations. Their trophy showcase is badly in need of a new moulded entrant and of all that Pakistan has suffered and faced in recent years, a victory for Pakistan is bigger than a victory for India. The fans and the cricketing world expects Pakistan to get back to good conditions and the best way to answer the prayers of millions back home is to reach out for glory.

All in all, its going to be a belter of a contest with the Indian batsmen versus the Pakistani bowling going to be the treat for the eye. The battle-lines have been drawn, the bugle blared and a war-situation very much on the cards.
Posted by Seasonal Magazine at 2:21:00 PM