Will Dhoni Vouch for Sreesanth? 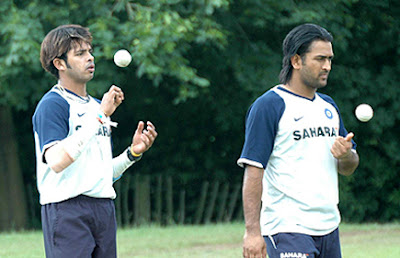 
One man who hasn’t been part of India’s World Cup scheme of things is the mercurial bowler, Shanthakumaran Sreesanth. It waits to be seen whether Dhoni would give him the go ahead. Going by his performance in the opening game against Bangladesh, Sreesanth will have to prove a mighty lot to come into contention. Somewhere there is a feeling among many that Sreesanth would be the deciding factor on the big day. With his raw pace along with his skilfulness with the ball may prompt the team to rope in this fiery Kerala pacer.

In or out, Sreesanth’s support for the team off the field has been tremendous. As witnessed  on television screens, he can be seen  running in with Gatorade bottles and towels so as to freshen up his team-mates during intervals. When Zaheer was undoubtedly out of fuel, the hospitality provided by the young man is worth taking note of. Even when he steams into bowl, he has that burning desire and confidence written all over his face.

Known to be a temperamental pacer, Sree is just a game away from striking form. One match isn’t enough to prove his mettle and Dhoni must take a beating for ignoring the pacer for the rest of the matches, where India struggled to go with a  good bowling combination, with only Zaheer coming up with spectacular performances throughout. So taking this into consideration, Sreesanth may fancy his chances for tomorrow.

With the Mohali wicket known to have a bit of grass and bounce, Sreesanth can reap rich dividends if utilized efficiently. But it still waits to be seen whether he would make the cut. Morever, having Sreesanth in the team lends more balance to the side, which is struggling to bowl out teams. But one question that will linger in Dhoni’s mind is: Is Sreesanth worth the gamble? Going by his gambling nature, chances are high that Sreesanth will be seen partnering Zaheer with the new ball tomorrow.

Ideally, Sreesanth is the most suitable partner for Zaheer . Simply because he does what Zaheer wants him to do . Sree is a  natural outswing bowler, having a good seam position, and moves the bowl away from the right-hander. This is exactly what Zaheer expects him to do. And what Zaheer would do is to try getting the bowl into the right-hander, that is, swing it in. So with Sree bowling in tandem with him, Zaheer can hope to grab more wickets as the batsmen would be hoping for him to bowl the outswinger but he slips in an inswinger and can get the batsman caught napping.

Combination and skill should be looked upon, not  just past performance. Take the case of Nehra. He bowls the same stock delivery as Zaheer, so evidently Zaheer wouldn’t get much purchase if bowling along with him. While Munaf hardly swings the bowl in or out, Sreesanth seems a viable but risky option.

Sree can go for runs unlike the latter but as history shows all high economy rate bowlers have been prolific wicket-takers. He can be India’s surprise package for tomorrow’s big day as not many teams have analyzed upon him.

With Sreeanth in the team, the match may turn out interesting as his antics have received world-wide recognition, even if with distaste. What the common man can do is to keep his fingers crossed on tomorrow’s selection dilemmas and hope Sreesanth is the one who can take India to a historical finale on the 2nd of April.
Posted by Seasonal Magazine at 6:44:00 PM