India Down and Out, Down Under 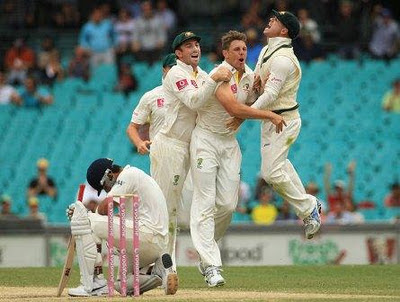 
Battered and tamed, the Indian team resembles not more than a bunch of sight-seers. Crushing defeats at Melbourne and Sydney have got the impatient and hungry critics up on their feet.

If one were to look back at the start of this series, none had given the Aussies a glimpse of possibility to emerge eventual victors. India was tipped to overpower the mighty Aussies with considerable ease. However the story-line has undergone a revamp. Australia, defying all odds, including Ponting’s dismal performances, perpetuated one of the most famous drubbing of India last week at the SCG where they mauled the Indians with an innings victory.

The ease at which former Captain Ponting has been relegated to an ordinary player is striking and stands as a sharp contrast to what would be a former Indian Captain’s attitude as an ordinary player in the team. For India what matters is its bigwigs,  while for the Aussies it is the team.

Over the past couple of years, India has always gone into a series with the ‘favourites’ tag stuck firmly on their foreheads but returning back as mere sitting ducks. Fair to say, Indians have been non-impressive and nonchalant in their game approach. The fighting spirit and sting were lacking in their method of play.

It seems the entire team is eagerly awaiting ‘Paaji’s’ 100th ton so much so that the very crux of the recent debacle is being underwritten. It would have been great if Tendulkar declared that he would consciously avoid the 100th century in 2012, which would allow the whole team to perform.

India is a unit comprising of highly-rated individuals and a multi-million dollar captain with the vision of attaining the top spot  doing minimum of labour and maximum of incentives. This is what the present team represents at the moment. It is worthwhile to ponder whether a player like Kumble would have strategized like Dhoni’s minimum labour methodology.
Otherwise, which Captain would have allowed two days of leisure and carting immediately after two successive defeats for a nation of one billion cricket lovers? Does scheduling even half a day of practice on those days require great strategy? Or is it about mere commonsense and a sense of duty? Evidently, the Captain as well as his team-mates lack that diehard attitude.

A critic can never keep mum about such a discrepancy in the Indian cricket team’s methodology and letting go of such incidents unnoticed will only further famish the already rusting team.

To add to their woes, indecent and derogatory gestures show-cased by the young Viraats and Isshaants (names altered to rake in a bit of luck!) highlights the scarcity of moral values and principles embedded within the team.

Rejuvenated and replenished, the Aussies are definitely going for the kill notwithstanding the recent cruelty meted out to the Indians. The Indian Team may not fancy the constant bickering and pestering from the media’s side but Dhoni and Co are unaware of the fact that contemporary Indian psyche is all about playing down successes and highlighting failures!

Dhoni claims that the team has begun to sniff at the doorsteps of improvement but the results have suppressed his very claim. The down-fall has got to do more with the emotional and mental aspect rather than the technicalities involved with the game. Unconscious competence reckons that the Indians are too proud a race that minor mistakes will leave them unperturbed rather than make them introspect whether the cause for the mistake is the solution to their embarrassing problems.

A case in point is whether the higher bat speed from recent T20s and ODIs is affecting our batsmen in this test series. It was only recently that Michael Clarke claimed that quitting T20 made him a better player. Another glaringly evident error is our poor understanding of overseas pitches. Any side would game domestic pitches to their advantage, and that is why no team is really great until they master winning at pitches in other countries.

Gambhir has looked far from regaining form, nevertheless reports suggests that he is the sole player who regularly hits the net sessions. Gambhir’s hardwork may pay-off but it may come too late for a team gasping for a grab at victory.

The swashbuckling Virender Sehwag has pictured himself more of a sorry figure than the prefix attested to his name with his irresponsible style of play not helping his cause.

Dravid has been out bowled 52 times in his career (another dubious record in the making) and ‘The Wall’ has looked easily pregnable and defense-less to the moving ball that have made experts point out that Dravid’s resilience is slowly loosing it’s sheen.

For stalwart Tendulkar a century is outstanding and the moment he achieves the landmark, Indians may as well start off the packing process for the return flight back home where unsolicited critics are waiting to shower them with praise.

The likes of Dhoni, Isshaant and Kohli have made headlines off-the-field than on it. Captain Cool has come out with baseless defence of his team stating that their most important, short-term goal was achieved i.e. accumulating 300 runs on the score-card which is a pathetic and tooth-less self-defence tool adopted by MSD. Such tooth-less strategies can be adopted by not only Dhoni, but Srikkanth, and Srinivasan too.

Rather than their bat and ball do the talking respectively, Kohli and Ishhaant  have exercised their fingers to good effect! And Dhoni was not as disappointed with this as he was with Sreesanth’s antics. If only the line and length of Sreesanth were right, he would have at least contributed some mind-games to the Indian side, provided his Captain allowed.

The overall outcome is just spicy news for the blood-thirsty media, and nothing more, nothing less.

Zaheer and Umesh Yadav have showed only sparks of brilliance with no citation of them troubling the Aussie batting line-up. Ashwin has ensured his batting heroics will find him a place leading to the third test at Perth but his bowling figures may prompt the think-tank to toss the ball to Pragyan Ojha since the former has looked ineffective and out-of-ideas sorts.

As the script reaches it’s final phases, at present, the only ones wary of an Indian fight-back are the Aussies themselves. Is this too one of their famed mind-games targeting the fragile Indian minds?