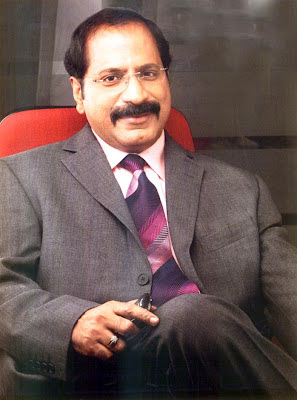 Manappuram Finance Ltd (BSE: 531213, NSE: MANAPPURAM) has been going through a difficult patch after the RBI directive that its group companies should stop taking deposits. Close on heels came speculations that RBI will regulate gold loan players like Manappuram Finance and Muthoot Finance.

Seasonal Magazine caught up with Chairman VP Nandakumar to clarify various points regarding both developments. Looking at the clarifications any market watcher would be concerned whether RBI had gone in for an overkill with Manappuram. While nobody will have any doubt that wrong-doers should be warned, the relevant question is who bears the brunt of such regulatory actions.

A close look at recent bulk deals post the RBI order reveals that most long-only FIIS and DIIs in Manappuram has remained with them, or at least haven't done large exits. What that also reveals is that much of the exits were by panicked retail investors, many of whom might not be in profit due to the sharp market correction during recent quarters.

Also of concern is whether the speculated action against gold loan lenders is to protect the interests of public and private sector banks. Though no one would doubt that extremely high interest rates shouldnt be charged, it is an undeniable fact that people go to gold loans lenders mainly because banks are not processing such loans speedily or in a customer-friendly way.

In its recent Board Meeting, Manappuram Finance has constituted an independent Board Commitee under the Chairmanship of Jagdish Capoor (former Deputy Governor of RBI and former Chairman of HFDC Bank) to improve corporate governance. The committee will be assisted by leading accounting firm, KPMG, and leading law firm Amarchand Mangaldas.

Off to the interview with VP Nandakumar:

Have Manappuram Finance or Manappuram Agro Farms accepted and/or renewed deposits from public, after March 22nd 2011, when it was converted into a non-deposit taking NBFC? If yes, what is your justification for it?

There are two parts to your question. Firstly, let’s be clear that Manappuram Finance Ltd. has not accepted or renewed deposits from the public after March 22, 2011. However, as we clarified in our recent press releases, we accept investments from the public into our NCDs and bonds which do not fall within the definition of public deposits.  Secondly, about Manappuram Agro Farms. This is a proprietary firm that belongs to me that has accepted deposits from the public, mainly from my circle of friends and acquaintances in and around Thrissur. Now, RBI has said that under Section 45-S of the RBI act, unincorporated bodies are prohibited from accepting deposits from the public. However, the legal advice we had been given was that when this section is read along with Section 45-I, there is an exemption for unincorporated bodies dealing in agriculture and related activities. Anyway, now that the RBI has clarified, I have stopped accepting deposits in Manappuram Agro Farms and I am also refunding the same as and when the claims are made.

When Manappuram Finance became a non-deposit taking NBFC, does it imply that other group firms also have to follow suit?

No, there is no such implication.

Manappuram Agro Farms Ltd is said to have deposits and liabilities involving Rs. 140 crore. Are you repaying the whole amount and in what time-frame?

Yes, I am repaying the whole amount at the earliest, in any case not later than the maturity of the deposits. Moreover, we are also giving depositors the option to withdraw prematurely as well.

Why did you opt to roll over some deposits, as being alleged?

Deposits were not rolled over in Manappuram Finance, in fact, they were repaid on maturity. Some of the depositors shifted their money to Manappuram Agro Farms of their own accord. Besides, as I said before, at the time we believed it was permissible.

Can you approximately quantify the impact of RBI order on your financial projections?

There will be no financial impact on Manappuram Finance Ltd.

You have clarified that there are no balance sheet linkages between Manappuram Finance and the other companies. But even unconnectedly, is there any strain on your balance sheet as some sections of the media claim?

Yes, there are no balance sheet linkages between Manappuram Finance Ltd. and other Manappuram Group companies. And there is no strain on me whatsoever. In fact, in the past few days, we have met the claims of all the depositors who wanted to withdraw prematurely without any hitch.

Is there any restriction on you to accept investments through secured NCDs and subordinate bonds? What is the issue, if any, regarding NCDs?

As things stand now, there is absolutely no restriction on us accepting investments through NCDs and subordinated bonds and I don’t think there Is any issue regarding NCDs.

What all constitute your regular ways of raising money for lending, and is any of those routes affected now?

We raise money for lending mostly through borrowings from Banks. We also tap the money market through CPs and there is a relatively small portion of debt raised from the retail segment (NCDs and subordinated bonds). All these routes continue to be available as before.

Are you talking with institutional investors already on this issue? Do you expect large exits by FIIs, considering last two days’ massive price and volume action? Or is it just a knee-jerk reaction?

We have been in regular touch with our institutional investors. Initially, like everyone else, they were also concerned but once they were fully briefed about the situation, they have been supportive. In fact, we had a Board Meeting on February 10 and many constructive measures are being taken based on the inputs received during the meeting.

Do you think that the issue that RBI alleges on you is done by other gold loan companies or NBFCs?

No, I don’t think that is the case at all.

According to you, what led to this kind of situation, and how do you expect prevention of such issues through better corporate governance?

Rating agencies like CRISIL & ICRA have put Manappuram on a ratings watch. In what time-frame do you plan to alleviate the concern of such agencies?

I think it’s very clear that there are no financial implications for Manappuram Finance Ltd. and I’m sure the rating agencies will, in due course, factor that into their ratings. Besides, the measures we have initiated since the Board meeting of February 10 will fully alleviate their concerns.

You had disclosed that an ongoing family feud is behind this development. Can you explain this in detail?

Well, yes, I did mention that, but it’s better that I don’t add to what I’ve already said.

How do you view RBI's speculated move to curtail gold loan companies like Manappuram & Muthoot by putting interest limits as well as loan-to-value limits?

As of now, it is only a speculation. But even otherwise, I don't think there will be any serious impact from this on Manappuram Finance as such a move will cause volumes to surge.
Posted by Seasonal Magazine at 11:31:00 AM