The Rise of Ajinkya Rahane - Dravid Like Talent, But More Exciting 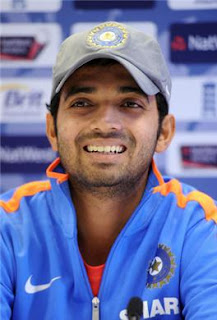 
One of the tweets that came flashing on the TV sets during the time when Ajinkya Rahane defied all odds and went on to smash a breathtaking ton was ”if you missed the over where young Rahane scrounged Aravind for 6 fours, you have just missed a glimpse of India’s cricket future.” It was so aptly conveyed that its inner meaning derives a long-term excitement and hope that Indian fans are bound to enjoy.

The abstract manner in which the young Mumbaikar kept the crowd spellbound with his sedate striking of the ball made one realize whether Rahul Dravid is continuing and re-living his mesmerizing playing days, when he injected into the minds of people that even saints can devour their prey, blissfully though.

Rahane very much resembled his childhood idol, Rahul Dravid, in technique and even facial traits. However, unlike ‘The Wall‘,  Rahane is a launch pad type player who attacks firing from all cylinders right from the word go and is a spectacular figure of calmness and temperament.  The way he made mincemeat out of the RCB bowlers was a treat to the eyes.

The sheer talent of this batting prodigy prompted India’s star opener, Virender Sehwag to state that he is the future of India undoubtedly. Fundamentally, Rahane is a crisp improviser of the game but doesn’t let go off his conventional stroke-play which has made cricketing scrutinizers compare him to the legendary Dravid.

His innocent looks are charming to the soul but he is genuinely merciless to his opposite counterparts -the pitiable bowlers. Ask RCB bowler, Aravind , who got a taste of Rahane’s  brutal ‘innocence‘.  The timeliness of his strokes and most importantly it’s execution makes one realize whether he should be kept rusting life-long in the domestic fray.

Though he has represented India, the opener hasn’t made it count so much as he would have liked to. Like all other luckless talents in India, Rahane too languishes and exists in the era of the great Indian cricket uprising led admirably by the everlastingly supreme, Sachin Tendulkar. Rahane has had an agonizingly long wait for a break into the top-flight cricket but rather than being complaining and hope-lost, the rising star is grateful for the opportunities being given to him.

He has played perfect foil to Wasim Jaffer in the Mumbai Ranji colours and is a steady performer during all seasons. His rise to fame and name is closely associated with his sparkly performance in the lone T-20 match ,when India toured England in a forgettable vacation, in which he grabbed the eye-balls of the  perplexed selectors with his wondrous hitting and for a pygmy-stature of his, young Rahane stands as tall as ever.

The calculative and pulsated approach to his game-play suggests of a player who has come of age and is no push-over however intimidating the bowlers operating are.  Firstly, it has come as an unbelievable surprise to many, given the current form Rajasthan Royals are in. None would have given them the slightest of chances of making it to the top of the points chart let alone get off to a dream start to the tourney.

RR, over the years have been the dark-horses of the IPL and the stupendous display put forward by them thus far is an indication of the tag attached to them. Largely, the credit should go to their skipper, Rahul Dravid who has utilized his bowling-troop brilliantly even in the non-availability of Sreesanth and Shaun Tait. But the man who has multiplied the fortunes of his team and at the same time reaped rich dividends for himself is Ajinkya Rahane.

With already an IPL ton to his name, the Mumbaikar, henceforth will only leap to greater heights. He is the leading run-scorer so far having produced 304 runs, which is inclusive of a century and half-century. He is currently the proud claimant of the orange-cap, a recognition for the player who has the most runs in the ongoing- tourney. Immediately after this wonder-boy stroked a fine century a few days back, critics have questioned the inefficiency of the selection process where talents like Rahane were earlier left unattended.

His solid technique and outstanding temperament makes him a natural choice for the Test team but unfair as it may seem, the youngster may have to toil and grind himself  a few more years in the Ranji turmoil before he gets a Test-berth call.

Before IPL-2012 commenced,  Ajinkya was on the backdrop of a terrible series loss to Australia where he failed to feature in a single game. In recent times cricket purists have been vouching for his immediate draft into the main squad, at the cost of under-performing senior pros. His Mumbai Ranji trophy team-mates best describes the future star-in-the-making. Whenever the team were in dire straits, Ajinkya, along with his Mumbai skipper Wasim Jaffer , had bailed them out of crisis umpteen times.

His ability to instantly adapt to the playing condition and situation makes him a talent worth investing on. With his recent tremendous outings, Ajinkya surely has the right to stake his claim. But like all other aspiring young students of cricket, Rahane gives an honest view point that he is content and overjoyed at present and feels blessed that he has been bestowed with a gamut of opportunities and most importantly he has delivered when it mattered the most.

As of now, he is willing to wait till his chances beckon but let us hope  that he too isn’t  left distraught  by his unfulfilled Test-cap dreams like his Mumbai senior-mate Amol Muzumdar, who even though scored heavily in the domestic fray failed to make the cut into the national mix. In a country that admires and idol-worships it’s wise-aged cricketers, young talents like Rahane shouldn’t be left in the wild for too long. It’s high time we stand up and take notice of youngsters like him instead of showering praise at our nearing-retirement pros, who have got their share of recognition during their illustrious playing days.