Can Delhi Pull off a Daredevilry Act Against Mumbai Indians? 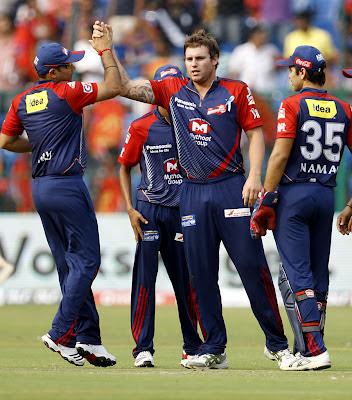 
There is high buzz among the IPL fanatics regarding Mumbai Indians’ home match-up against the brimming-with-confidence Delhi Daredevils as the match is a clash of two gigantic powerhouses. Metro-rivalry, as some call it, makes this purely night-affair  encounter a must-watch episode.

But the game is surely not for the faint-hearted and the conventional cricket protagonists. Both sides have at their ranks the most highflying and spectacular cricketers around the globe. Text-book shots may be a rarity but an altogether new cricketing technique manual might be the way forward to stay ahead with the advanced times.

The likes of Kevin Pietersen and Keiron Pollard are innovators in their own rights. But what makes the match such a sought-after proceeding is because the two teams have the quality players and momentum at their disposal which makes the game a once-in-a-lifetime encounter.

While Mumbai Indians are fresh from a comprehensive victory over the Rajasthan Royals where they crushed the North Indian unit by 27 runs, the Delhi Daredevils have been the team to beat in this IPL as their new-look squad poses serious threat as a major contender for the ultimate IPL glory. Sparks are sure to go flying and the crowd-population may go helter-skelter with both teams possessing hard-hitters at their midst.

Delhi Daredevils have more than lived up to their team name and credentials. After a disastrous season last time around, the Delhi think-tank must be credited for having pooled in the best in the business and reformed a rather depleted looking unit. Their internationals buys would make any team envy as the franchise have roped in true-performers in the likes of Mahela Jayawardena, Kevin Pietersen, Ross Tayor and Doug Bracewell.

Virender Sehwag, who has been in mediocre form of late just requires one good innings to redefine his touch and the Delhi skipper will hope that he can deploy his resources efficiently to winning ways.

It would be cynical if the team plays Aaron Finch at the cost of a Ross Taylor, who has been an outstanding batsman in this format. However the New Zealander has just recovered from a long injury-layoff so the team may not quicken his inclusion in the line-up.

Kevin Pietersen is a game-changer in all respect as the South African born English cricketer is capable of modifying his approach according to the situation and is an epitome of innovative and crafty batsmanship. His reverse sweeps and switch-hits have kickstarted a furore on its usage but KP is a true daredevil and fighter so it would be unsurprising if he goes against the fundamentals and conventions of the game.

Mahela Jayawardena is a class-act and in most scenarios adorns the role of the director of the batting department. His ability to anchor and hold together the innings and instill confidence into his fellow batters shows the value of the Sri-Lankan skipper for DD.

Irfan Pathan has sounded the come-back sirens in aplomb. The all-rounder has played an integral part for the team with his nagging bowling lengths and calculated big-hitting. His ability to fill in the shoes of a ‘floater’ makes him adaptable to whichever situation he is put into.

Doug Bracewell picked up three wickets in his maiden IPL appearance and such is the talent of the Kiwi pacer that it would be a shame if he isn’t given a slot in the playing XI. His batting skills too may come in handy and his lower-order fireworks add icing to DD’s targets.

This man is a Dennis the Menace with the ball. Yes, this is with reference to the tall and lanky Morne Morkel who is threatening short-deliveries and his blood-shot yorkers sent shivers down the spines of many an established batsman. Along with Umesh Yadav’s fiery spells, Morkel is a tough nut to crack and the MI batsmen will have their work cut out against this fearsome duo.

Venugopal Rao was a run-machine during his peak days of cricket and though the Hyderabadi has lost his sheen over the years, his value to the DD middle-order is worth taking note of.

Since scoring a blistering half-ton in the IPL opener against CSK, Richard Levi has found the going tough as he has failed to connect his blade with the ball in most occasions. His partner’s form-status is as woeful as his. Tirumallasetti Suman hasn’t quite lived up to his reputation as a stroke-maker and on the contrary his trademark strokes have been eluding him.

The news of Sachin Tendulkar’s availability ushers energy into the MI squad and the intense metro-rivalry between the two cities may prompt the MI brains to field this big match-player.

Young Rohit Sharma has stabilized the MI innings when it nears a certain collapse and his ability to churn runs at will and pierce the gaps with aghast makes his presence a huge plus-point for the home team.

While it has always been tough to silence the MI on their homeground, the Pune Warriors have showed that holding onto your nerves during the business-end of the match will enable a team to beat the best of the lot. And Pune did just that.

So DD can take heart from Pune’s stunning victory over their arch-rivals and take the fight to the MI camp. Keiron Pollard has finally come good with the bat and the big West-Indian has been the team’s impact player. He is also the second-leading wicket-taker, jointly with Lasith Malinga. The slingers of Malinga are still a code to decode. The Sri-Lankan spearhead has once again showed the cricketing world as to why he is a brilliant exponent of death-over bowling.

Surprisingly, Munaf Patel heads the purple-cap list by accounting for 10 wickets. His sudden form-enhancement has ensured that MI has the best bowling attack of the tournament. So far, that is. With the likes of KP and Sehwag, who go after the bowling without prior invitation, no bowling attack can silence these two hard-hitters and once they are on song and unleash their trademark stroke-play, even Malinga may have to bow down to their sheer talent.

The game is a tough one to predict the clear-winner as both teams resemble equivalent in composition and depth. Though MI have trounced DD on 5 occasions compared to the latter’s  3 victories over the Men in Blue, the game may might as well go down to the wire.

With the kind of bowling attack they are up against, the awaited contest will be between DD’s batsmen and Malinga and Co. The one who emerges victorious in this mini battle will have won the game for their respective side. Cricket pundits and money-driven betters may tear their hair-strands in utter madness when asked to predict the prospective result of today’s high-octane clash.

However, one thing is for certain. If either Sehwag or KP gets going for DD, then the prediction becomes all the more easier.