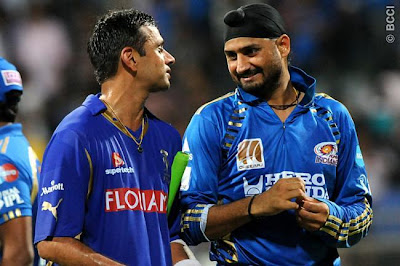 
As the Rajasthan Royals take on the Mumbai Indians at the latter’s indomitable Wankhede Stadium, little does the former know that they head into this match as clear favourites to effect a major upset. Rajasthan Royals are surprisingly the table-toppers after two convincing victories over Kings XI Punjab and the much hyped about Kolkata Knight Riders.

The team is basking in glory with their resolute captain, Rahul Dravid, having taken over the Rajasthani outfit from the Sheikh of Tweak, Shane Warne. The run machine in the domestic circuit, Ajinkya Rahane is the proud owner of the Orange cap after kick-starting his IPL campaign with a stroke-filled 98. He has been well supported by his skipper, who despite being a slow starter, possesses the penchant to score freely at the latter stages.

Brad Hodge has been a consistent performer for the RR as his big-hitting ability is well complimented by his knack of piercing the gap in the field. The eccentric Owais Shah has been in blistering touch as his late fireworks with the blade has ensured that the Royals have always set a mammoth target. But it is the Trinidadian-all rounder Kevun Cooper who has taken the IPL by storm. His power-packed pinch-hitting cameos and his Midas touch with the ball make him the player MI should be wary of.

Johan Botha is yet to provide a decent contribution but the talented off-spinner can strike form when it matters the most. Amit Singh and Trivedi have been fabulous on the bowling front.

The Mumbai-Indians pulled off a sensational win over the Deccan Chargers a few days back and that puts the unit in good stead ahead of this mouth-watering clash. Even in Sachin’s absence, the batting line-up is pretty able, with their batsmen capable of dynamic skill-adaptation as and when the scenario demands. With the Master-Blaster expected to feature only in the upcoming DD match, Mumbai Indians batsmen need to prove their mettle in a must-win encounter.

Richard Levi burst onto the scene with a hurricane knock but was found wanting against the Deccan Chargers as he looked visibly uncomfortable against the moving ball of Dale Steyn. Tirumalasetti Suman will be under pressure to fire as once Sachin returns, his place in the XI will be in jeopardy. Rohit Sharma was the star of the show in their victory over the DC and the young Mumbaikar showed why he is one of the best talents in world cricket at present. Lot will depend on this youngster to play sensibly as he is also known for getting carried away and throwing away his wicket with an untimely shot.

Ambati Rayudu too has a crucial part to play along with Rohit as the rest of the batsmen are blind-hitters. Keiron Pollard’s booming sixes made all the difference to their victory but it is his bowling and fielding which MI will bank on during tight situations. James Franklin was considered a misfit in this MI line-up when he first donned the franchise-colours but the fast bowler-turned batsman has reasons to prove his worth in this exceptional team. The Kiwi has  beautifully adorned the role of being the natural grafter but he showcased his hitting skills when he single-handedly led the team to a highly unlikely win over the KKR.

Harbhajan Singh, the captain, has replicated his past bowling skills which will help him  make a strong comeback to the national team. His bowling changes and calmness under pressure makes him sound captaincy-material. Malinga once again finds himself among the top-wicket takers and the MI will depend on the Sri Lankan to provide the early breakthroughs which he often does so. Munaf Patel has announced his return to the competitive cricket fold after he picked up 4 crucial wickets against the DC to restrict them to a paltry score and the pair of Malinga-Munaf looks menacing enough to shiver the livers out of the Rajasthani batsmen.

A win for Rajasthan Royals will propel them to 6 points and thereby enable them to hold on to the top ranking spot in the table. However this is a perfect opportunity for Mumbai to wrest the moment and emerge table-toppers and turn their stadium into a fortress like the RR have successfully done in Jaipur.

The man to watch out for will be Rahul Dravid for RR and Keiron Pollard for MI. With their recent domineering victory, many cricket pundits will bet on the MI to beat the favourites. And the only sad part is that Sreesanth is still out of action for the RR.