Will Chennai Super Kings be Threatened by the Gayle-storm? 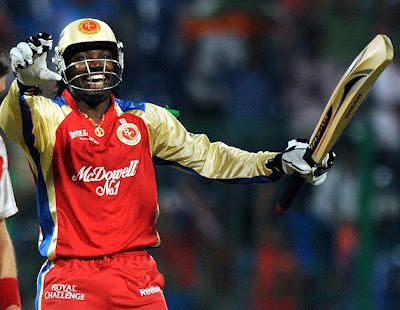 
A day after the shock-tsunami warning, Chennai might as well be guarded and wary of a Caribbean typhoon making its way to the MA Chidambaram Stadium. The Chennai Super Kings take on the Royal Challengers Bangalore in a much-anticipated encounter which will see last year’s finalists go all guns blazing.

While the RCB will be eager to seek revenge from their disappointing loss in last year’s IPL final , CSK have their own minute problems to deal with. Chris Gayle, who failed to make an impact during the IPL 2011 Finals, holds the key for the depressed Vijay Mallya owned unit. The Caribbean batting superpower will look to brew in a storm that would blow away the hapless CSK outfit, that suffered a heavy defeat at the hands of DD.

If Chris Gayle delivers on his day, then CSK may well and truly lick their wounds and quickly recover for their next match-up as stopping this Gayle-force, once he gets going, is near impossible. However it is AB De Villiers who has been spectacular with the bat for RCB. The South-African captain’s contribution will be vital for the red-army’s chance to avenge their past defeats.

Virat Kohli looked clueless and listless in his first two trips to the crease but there is no writing-off this boy wonder who is, literally, divine to witness when he is on top of his game. The batting unit will dearly want the likes of Saurabh Tiwary, Mayank Agarwal and Chetashwara Pujara to play to their merit and abilities as too much of the batting burden is being borne by AB De Villiers.

It is the spin trio of Murali and Vettori who will have to be well-chalked out and studied by the CSK batters as they are two world-class spinners in their own fields and rights. Zaheer Khan, though lacking in the pace, is still the spearhead of this bowling attack and he has often provided his team with early inroads.

The story of CSK so far is similar to the form of their captain, MS Dhoni - luckless. Although Suresh Raina and Dwayne Bravo have been amongst the runs, it is their remaining batters who need to pull up their socks. Murali Vijay has looked far from being comfortable as a string of scores that reads 3,2,0 indicates the disastrous form he is in. With Anirudha Srikkanth and the recovering Abhinav Mukund breathing heavily down his neck, it is now or never for Vijay.

Faf Du Plessis stroked few mighty blows to the stands but his inability to carry forward and convert his innings to big scores will worry the CSK, even though the South-African has been electrifying on the field. The unit is obviously missing the services of their star-player Michael Hussey who is currently on national duty because the Aussie is a brilliant adaptor to any version of the game and his excellent form in the ongoing West Indies tour brings in joy for Dhoni & Co.

Suresh Raina has to take his game to the next level as the batsman has floundered reasonable starts by failing to accelerate his innings. Dwayne Bravo’s big hitting capabilities came to the fore against the DC but it would be most ideal if he is promoted up the order as he looks in fine touch. Backed by his bowling skills, embedded with variations, Bravo is a class act to have for any team.

The inner-circle looks impenetrable with Bravo, Raina and Du Plessis in their respective fielding positions. He usually adapts quickly to the situation he is pushed into, but Dhoni has been in terrible form recently. And with the team under pressure from all fronts to win, the pressure may take a toll on the Indian skipper. Though he isn’t worth his billings, Jadeja may prove handy for the captain as the Saurashtra-all rounder can play the big shots at will and is a more than capable left-arm tweaker.

If there is one bowler who can disrupt the Gayle-juggernaut, it has to be R Ashwin - Gayle’s proven nemesis. The off-spinner has troubled Chris Gayle in many an occasion so the battle between the two will be the most mouth watering prospect. Doug Bollinger and Albie Morkel haven’t lived up to their credentials but it is likely that Dhoni will stick with the two internationals as he is left with very few options to innovate.

The match will be surely a contest of power-hitting between two heavy weights, but the depth in their batting line-up may enable CSK to canter home victorious, though just by a whisker. Expect MS Dhoni to promote himself up the order if Vettori-Murali is operating. Chris Gayle will be crucial to RCB’S chances and loosing him early will spell doom. R Ashwin will go into this match high on confidence but his recent form isn’t something he can boast about. Fielding may make all the difference and with both teams offering exciting and outstanding fielders, the match may might as well go down to the wire.