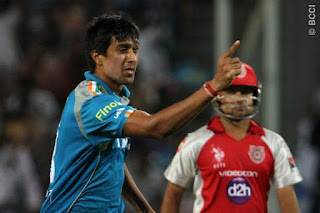 
Pune Warriors India are a rejuvenated unit. The news of their icon-player, Yuvraj Singh,  returning back to India after undergoing a  successful cancer treatment, will strengthen and motivate the Ganguly-led team to stamp their authority over the downtrodden KXIP.

A recent encounter between the arch-rivals saw the Pune Warriors overpower the Punjab unit  by 22 runs at the former’s home ground . PWI, though do not boast of super-stars in their team, have a balanced and talented unit. Saurav Ganguly is yet to fire in the tourney but his captaincy is being highly-talked of and part of Pune’s success has to be credited to India’s most successful captain overseas.

Jesse Ryder’s inclusion brings an added option for Dada in the bowling aspect, however it’s the Kiwi batsman’s blitzkrieg that Pune would want to see. Robin Uthappa has been fabulous for the team and a few more notable performances will reignite his chances of making it to the national team fold.

Marlon Samuels, the West-Indian who opted to play in the IPL instead of participating in the test-series against Australia, has been in ominous touch as well, both with the bat and ball. Manish Pandey showed his six-hitting ability against the KXIP and the middle-order batsman will be content batting in the position he is.

Callum Ferguson is a remarkably talented Aussie recruit and with the kind of batting prowess he can showcase, KXIP bowlers have their task cut out.  Ashish Nehra is a proven-customer in the death overs and his experience will be vital for Pune Warriors to edge past KXIP. Ashok Dinda has been their bowling star and he also features  in the leading wicket-takers list.

Their spinners in Rahul Sharma and Murali Karthik have been able to curb the flow of runs along with breaking prospering partnerships. Their batting still has a lot to offer and PWI will want Ganguly to be in the thick of runs as the tournament progresses.

With Dinda, Nehra and Ryder, PWI have in their ranks top-class pacers. Their fielding is exceptional with young legs like Pandey and Ferguson being rated highly for their fielding abilities. Having Steven Smith means an additional all rounder and this Aussie bloke has been in scintillating touch with the bat.

KXIP have an ocean of problems to address. Their captain has done his best to get the best out of his team but it requires the unit to perform collectively. Gilchrist and Valthaty haven’t quite provided them with the rollicking starts like they used to in the previous editions. The team is surely missing their best performer Shaun Marsh.

David Hussey will be their key player as the Aussie is a powerful hitter of the cricket ball and a smart offie. Piyush Chawala has sparkled in bits and pieces but the team would want the leggie to get the likes of Ganguly, Samuels and Ryder out early to have any chance of conquering the bolstered Pune team.

Perhaps one would wonder how  left-arm seamer James Faulkner finds a place in the team because he has looked out-of-sorts  and highly predictable. He has a non-performing partner in Praveen Kumar and the two have been taken to the cleaners on quite a few occasions now. Harmeet Singh seems to be the only bowler who is using his brain cells to good effect as the tall pacer mixes up his deliveries cleverly and has a difficult leg-break to read.

Sadly, KXIP resembles the most-jaded outfit in this IPL and they might suffer yet another loss to the PWI if they stick to their present bowling attack. Their fielding has been paltry , they have hit the fewest sixes and have no noteworthy batting or bowling performance to their name. In all likelihood, Pune Warriors India will climb atop the points ladder after they were displaced by MI in the top-spot after the latter’s convincing win over RR yesterday.