German Giants Out to Vanquish the Rudder-less Dutch Outfit 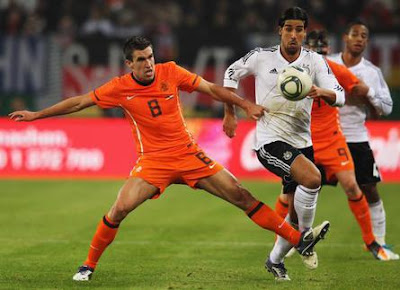 Before the Euro2012 even kick-started, many predicted that Germany and Netherlands would ease their way into the quarter-final stage from their dangerously-drawn Group of Death (B), which also includes Ronaldo’s Portugal and Denmark. However, after the first week’s high-voltage action and melodrama, Netherlands see themselves facing a virtual early exit after their shocking defeat at the hands of less fancied-Denmark. In today’s encounter, Netherlands find themselves locking horns with the indomitable German outfit, and a probable loss or even a stalemate will see the 2010 World Cup finalists approach their travel agents to book their airway tickets back home.

Further aggravating their issue is a rumour of a rift between Bundesliga’s current season top-scorer, Klaas-Jan Huntelaar and his perplexed coach, Bert van Marwijk. The Schalke star reportedly is furious at his national coach for not fielding him in the starting line-up against Denmark after his impressive goal-scoring run in the just-concluded German League.

Facing a prospect of early exit attached by humiliation, the Dutch needs to turn the tide in their favour if they wish to add worth to their billing as tournament favourites. Surprisingly, Bert van Marwijk intends to drop Barcelona star, Ibrahim Afellay after his lacklustre performance in the first match and he hopes to replace the 26-year old with another world-class and established player in Dirk Kuyt.

Captain Mark van Bommel and Ron Vlaar too haven’t impressed their coach and it remains to be seen if they face the axe. However, it’s their star-players in the likes of Arjen Robben, Wesley Sneijder and Robin van Persie who looked woefully out of finishing quality which saw the trio miscue umpteen number of opportunities on goal.

Wesley Sneijder, comes into this tourney on the backdrop of a disappointing season-stint with Inter Milan, a season which saw the former UEFA champs literally outclassed in every aspect.

Regardless of their first-match horror-showing, Robben and van Persie will need to find the back of the netting if Netherlands are to upstage their old foes and prime rivals in Germany. In all likelihood, Rafael Van der Vaart looks certain to replace misfiring Ron Vlaar while Nigel de Long maybe be benched to accommodate veteran Joris Mathijsen, the central defender who has been nursing a recurring injury.

Their defence looks brittle and far from intimidating which saw them concede a hilarious goal to the Danish team. John Heitinga and Van der Weil and Willems will have to put their best foot forward if they are to unsettle the rampaging German attack. Sketelenberg will be the custodian and he will hope his work is cut out by the defenders.

As far as the Germans are concerned, a solitary goal against the Portuguese definitely hasn’t proved their potential mettle. Though they did manage to sneak in a hard-earned goal, by way of a Mario Gomez header, the Germans looked patchy and sluggish throughout the encounter.

Sami Khedira, more often than not, messed up goal-scoring chances but it was his precious cross into the penalty-box that found the sky-high Gomez. Bastian Schweinsteiger almost looked invisible on the field raising speculations that the German-midfield general is yet to regain full recovery from his broken-collarbone.

One would be wondering what Lukas Pdoloski had in mind when he scorched a couple of kicks into the crowd and the Cologne star resembled a faded-figure compared to his glorious past. If not for Mesut Ozil’s spirited game-play, the Germans would have squandered chance after chance and the German boy-wonder will be the key to Germany playing party-pooper at the expense of the Dutch.

Mario Gomez, may might as well be retained for this game if not for his face-saving effort that earned Germany three vital points though the upcoming star portrayed a helpless sheep on the playing field.

Miroslav Klose should be the first-choice substitute if the Germans find it difficult to break the shackles. German captain, Philip Lahm made few tremendous runs into the Portuguese area but that was all there is to it. The 28-year old should look to exploit the weakening left-flank of the Dutch defense instead of making fruitless runs into their box to no avail.

Jerome Boateng was incredible against Portugal as being Cristiano Ronaldo’s marker he did manage to silence the rocket and nimble-footed Real Madrid star. Tonight, he’ll either have to mark Robben or Kuyt depending on who plays the left-flank.

The two-fresh faces in Holger Badstuber and Mats Hummels displayed stupendous defensive skills which makes them certain to feature in tonight’s encounter which means Per Mertersacker, the veteran central-defender, will once again warm the benches.

Manuel Neuer, the German goal-keeper will be tested to the limit by Robben’s and Sneijder’s occasional shot on goal.

This mouth-watering clash promises one thing. Either one of the heavyweights will find the going tough to qualify from the group after tonight’s result, whichever way it may take.

A loss for Netherlands would mean their end of title-hopes provided Denmark prevails over Portugal, which looks certain on paper. Germany too cant afford to relax as a Dutch win will upset their chances of topping the group. The odds are pitted against the Dutch but in all certainty, the match will go down to the wire.
Posted by Seasonal Magazine at 8:32:00 PM