The Two Teams that May Spring Surprises in Euro 2012 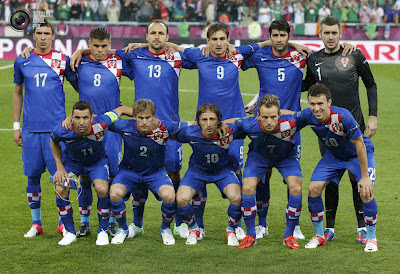 
Tournament favourites rule the roost, hog the glorifying limelight and even face unimaginable amount of pressure and jittering as soon as they represent in a major tournament. For numerous years, teams like Germany, Spain, Netherlands, Italy etc have always had the ‘heavyweight’ tag firmly etched on their foreheads and more often than not they have lived up to it. But, there are those underdogs which give these supremos a run for their money.

While this Euro 2012 has seen the favourites put up a not so noteworthy display so far, it has been the less-fancied outfits that have provided quality and classy football. Croatia and Russia, both upcoming soccer giants have showcased their exemplary technique and unwavering confidence on the big stage. Both these teams are being pitted as the dark horses of the tournament and with the kind of talent they possess, it won’t come as much of a surprise if these giant-killers goes on to script their mark in footballing history.

While Croatia is well served by their talismanic and flamboyant mid-field operator in Luka Modric, Russia is indebted to their experienced doubles in the likes of Roman Pavychenko and Andreiy Arshavin, both of whom represented in the English Premier League for their respective sides a while back. Since their disintegration from the Yugoslavian nations, Croatia has emerged as a front-runner in all European tournaments but it is at the final lap where they have perished meekly.

They finished second runners-up in the 1998 World Cup and since then the red-and-white chequered outfit has grown from strength to strength. Croatia is often recognised by the visibility of their English Premier League playing stars in Modric and Kranjcar both of whom lend remarkable solidity to the Slaven Bilic-coached team. Croatia is being compared to the Netherlands of yesteryears as indicated by their stylish attacking gameplay.

Croatia has already topped their table after a convincing victory over the Republic of Ireland where they discovered a future star in Mario Mandzukic, the Wolfsburg forward. Now Croatia have two back-to-back games with two heavyweights - Italy and Spain - and if they manage to upset at least one, they can assure a spot in the quarters as Ireland look the most hapless unit of the lot.

Russia, announced their entry with a blistering 4-1 crushing of the Czechs and silenced the Polish fans with a draw against the home nation. Russia developed into a potent force under the watchful eyes of Guus Hiddink who has now been replaced by the enterprising Dick Advocaat. Like the Croats, the Russians too top their pool. Their refreshing brand of football has earned them much praise with experts going on to say that they have it in them to lift the coveted Euro Cup.

But what Croatia and Russia have lacked over the years is their inability to deliver in crunch games and over-dependence on a select few stars which have resulted them in crashing out after much promise. But the two football rookies will once again hope to arrest their big-match slide by capitalizing on early chances against top-flight teams. If they can attain the early advantage, then one may witness two fresh-faces battling it out in this edition of the Euro Cup final.
Posted by Seasonal Magazine at 12:36:00 PM