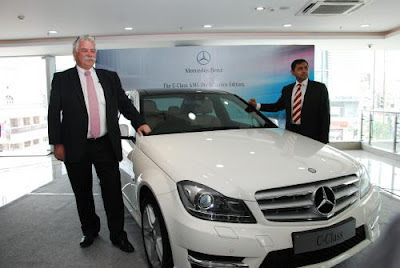 Recently, Peter Honegg, MD & CEO of Mercedes-Benz India has indicated that the company has cut its expected growth rate for the year’s second-half from 15-20% to 5-10%.

Once upon a time Mercedes-Benz was the luxury car to own in India. But a couple of years back, it was smoothly overtaken by BMW in India, much in sync with a pattern that was emerging across the globe between the German rivals.

Recently, Audi, its other German rival, and part of the Volkswagen Group has also convincingly zipped past Mercedes in India, thereby raising the red-flag in the minds of prospective luxury car buyers, whether to consider a Mercedes-Benz any more. After all, nothing succeeds like success.

What has really gone wrong for Mercedes in India? Firstly comes the issue of right pricing. Obviously, BMW and Audi has out-priced Mercedes’ offerings in all of the three popular luxury segments - C, E, & S segments. However, the issue is not that straightforward, as the out-pricing by competitors were not due to undercutting, but by smart-pricing, or in other words, offering much more features for the same price or slightly higher price.

Secondly, Mercedes has completely missed the SUV buzz in India, which has been driving the luxury auto market in India since the last two years. While BMW and Audi have SUV offerings in all the three segments, Benz only had an SUV in the top segment, which failed to attract much takers when pitted against the likes of Audi Q5 & Q7.

Thirdly, while both BMW and Audi clearly understood that out-of-this-world branding alone was not enough to demand obnoxious margins, Mercedes clung on to this aging business model.

Today, it is very evident that BMW & Audi has managed to survive in the Indian market only because they shed their out-of-this-world airs, came down to ground level, got their feet firmly planted in the Indian soil, and started competing with the likes of Honda, Toyota, & Volkswagen.

India’s largest selling luxury car for the last two years is BMW X1, their entry level SUV, which is noted not for any superlative features, but for its sensible price that made it compete with Honda’s CR-V and Toyota’s Fortuner. Now, Audi is doing a BMW with their Q3, which has found instant takers during its recent launch.

Next comes the issue of aging models of Mercedes-Benz. The time they took to upgrade their E-Class during the last 3-4 years is now infamous and cost them dearly in that segment, forcing them to offer deep discounts.

Also, despite recent upgrades, Mercedes cars have failed to shed the image of largely chauffeur-driven, whereas BMWs and Audis are thought of as drivers’ cars, and this has made a huge difference in the evolving Indian market, where luxury car buyers are much younger than before, and who largely self-drive.

Lastly, Mercedes-Benz has been sluggish to the dynamic changes in the Indian market, like how it still has no offerings in the B & A segments, despite the luxury car maker having the same in Europe. The reason cited - no right hand drives available - sounds just an excuse, and while a sub-25 lakh rupee B-Class is promised by the year end, its first A-Class would take another year.

Another instance of slow adaptablility is how it had got the petrol:diesel ratio totally wrong at 60:40. Though it has recently changed it aggressively to 90:10, it may be too little, too late. Latest figures show that after the slow-down in petrol cars, Indian market is now witnessing a surprise slump in the demand for diesel machines.

Also, the luxury car market is expected to take the largest hit in India, that won’t spare even the BMWs & Audis, so the plight awaiting Mercedes-Benz can be imagined.