Under-19 Lessons to India’s Young Cricketers 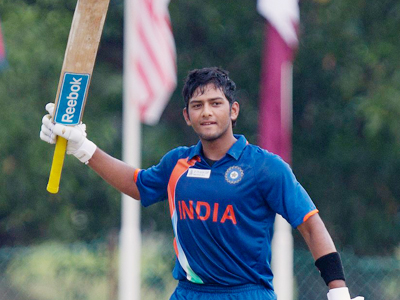 
Now what is in store for these new rising stars of Indian cricket? Without doubt, the sponsorships will queue up behind them. Their chances of elevation into ultimate cricket will, unsurprisingly, be high. The ever-hungry IPL franchises will rope in these promising talents without having to think twice. Their names will be etched in history which brings with it soothing pride and a sense of achievement.

However, there are certain aspects that the young guns will have to be wary about.

The victory signalled India’s third U-19 World Cup victory, after Mohammad Kaif (2000) and Virat Kohli (2008) led their respective sides to glory in the perennially-conducted event.

Take the case of Tanmay Srivastav, who was part of the victorious Kohli-led team which lifted this very trophy in 2008. The lad was in sublime form, throughout the tourney, and even notched up a couple of big scores which immediately resulted in a hefty-deal with the Kings XI Punjab IPL franchise, for which he represented the following year. He was the leading run-scorer for the Colts during that edition, playing the opener’s role to perfection.

However, the UP-born batsman displayed an utterly disappointing season with the bat, which saw him slide to an all-time lean phase. Paucity of runs and an even snail-paced run-rate, virtually shut the national doors for this exciting talent. Now, as he witnesses his U-19 Captain, Virat Kohli hogging the limelight, he is left to toil hard in the initial stratum of India’s match-structure system - Ranji Trophy.

Tanmay Srivastav is just a single case from this unforgiving scenario. The underlying fact is that, no matter whoever you are (Dhoni and Sachin, probably are exceptions to this), what matters is the deliverance of consistent performance.

Another U-19 fame who shot into instant prominence was Manish Pandey, although he still is in the orbit of the selectors’ radar. This bloke from Karnataka played a couple of notable cameos in the 2008 edition but it was a futuristic knock, that announced his arrival onto the big stage. He hammered a ton in the IPL which made him the first Indian centurion of the cash-rich league and the fact that it was so unexpected played a part in Pandey’s rise to fame.

In the following editions, the youngster came up with extraordinary performances which won him accolades from none other than, Mahendra Singh Dhoni. He was even in contention for a slot in the national squad after his repeated knocks of brilliance, including a quick-fire century, for a losing cause against eventual Ranji champions, Mumbai. He forged a formidable alliance with Jack Kallis, which saw the pair muster huge partnerships in the IPL.

Unfortunate as you can imagine, even Pandey saw his form depreciating to an all-time low. His agony compounded with the steady rise of Virat Kohli into the international arena, and eventually, had to rust in the domestic circuit.

The irony reflected primarily on their failure to wrest the initiative and squandering of once-in-a-lifetime opportunities. However, there is a lesson to be extracted from these two typical examples of overnight heroes to life-long zeroes. Be it Unmukt Chand or Sandeep Sharma, anyone who dreams to attain their ultimate target in the field of sport must realize the unpardonable element embedded in the quest for sporting excellence. Either you will make it big or flounder horribly.

This enlightenment enables one to systematically and effectively practice and realize short-term targets as the competition and stakes are sky-high. The simple solution to overcome disappointing results is to forget it as soon as possible as it may stand detrimental in your road to recovery. This game provides one with unsolicited glory and simultaneously, is the source of all forgettable moments.

Once again, unknown faces have made their presence felt in top-flight cricket. The Indian U-19 World Cup team did the nation proud by demolishing the formidable Aussie line-up by a convincing 6-wicket margin. Thereby, the Indian Colts are the new unheralded and unprecedented champions of junior-level cricket. Unmukt Chand led the charge with a blistering unbeaten knock of 111, well supported by glovesman Smit Patel who stroked an incredible 63, which was instrumental in taking the team past the finish-line. The other notable contributions came from Sandeep Sharma, who wreaked havoc by inflicting a 4-wicket haul, leaking a mere 54 runs and Baba Aparajith who furnished a timely-33 during the agonizing moments of the game deserve ample laurels as well.

All these is not to say that Tanmay and Pandey are “lost achievers” as they have age on their side but their career portrays similarities of under-achievement which by and large, is the deciding-factor at the end of the day. Both are hard-working and blessed with the talent to excel on the biggest platform but they seem lost when it comes to analyzing the path and means to arrive at the final destination. The current crop of fresh legs have it in them to make it count, however a couple of unremarkable performances is sure to send them crashing and withering with pain.

The new talented bunch dare not relax on their laurels and believe to have traced an assured career-path which in fact is foolhardy to even assume. Assuredly, they will be bestowed with opportunities which is beyond their ambit of wishful-thinking but over-assurance creeps in complacency and ultimately, lost midway. The U-19 stars must be aware of the intense competition prevailing in the cricketing-circle which must act as a motivating incentive to deliver constant, quality performance. They cant afford to waste their initial opportunities on the belief that they will be offered with further servings of chances.

As the saying goes, “You may have reached, but you are yet to arrive.”
Posted by Seasonal Magazine at 6:26:00 PM