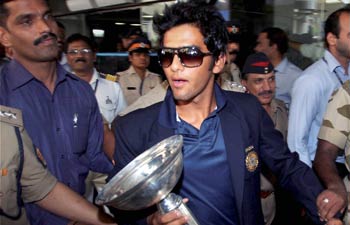 The all-time catchy quote, “Law was Meant for Man, Not Man for Law” recently struck at a core of our educational system, viz. university norms.

These norms were, in no doubt, laid down with the motive of creating equitable guidelines that would foster an optimum mechanism for all under the purview of it’s surveillance. Although majority of these established rules pertains to students under all categories of admission, there are some norms specially designed for the interests of aspiring sportspersons and cultural artists, popularly referred to as the sports quota students.

The most important commandment among the sports-rules is the one relating to college attendance. Perhaps, never before has this issue gained widespread attention, but unfortunately, for all the wrong reasons. Still the Unmukt Chand episode has escalated to an interesting case-study in this field, that will be remembered in the future as reference.

The U-19 World Cup winning skipper, who is enrolled in St. Stephens College for BA Programme Degree course, was slapped with the college rules-book, hours after he gallantly led India to a nail-biting victorious run-chase against Australia.

The College authorities were clear that the youngster had an insufficient attendance record, a pitiable figure of 8%, which eventually meant that he would be barred from appearing for the semester exams and technically, shall be asked to repeat a year’s class to achieve the requisite attendance conditions.

Months before, Unmukt was restricted from appearing for his first semester exam due to the same attendance-shortfall issue which also resulted in he moving court, after which he was allowed to take the exam for two papers out of four.

The latest row sparked a protest over the ‘insensitivity’ of the college authorities which witnessed the Sports Minister Ajay Maken, HRD Minister Kapil Sibal, Indian skipper Mahendra Singh Dhoni, and player Kirti Azad to come out in vigorous support of the lad, who according to his parents was left shocked and disappointed by the stand of the college.

The College Principal, Reverend Valson Thampu was persuaded from all corners of the country to relax the rules in Unmukt’s favor, but to no avail, as he wasn’t permitted to relax rules that governed the educational system of the Delhi University, to which the college is affiliated.

After much furore, and on directions of Minister Sibal to Delhi University Vice Chancellor, Unmukt Chand was granted permission to attend his second-year classes after he qualifies the remaining two papers, which he missed out due to the court-verdict delay.

Today, Unmukt Chand is a happy chap. The College authorities too are relieved. The Sports Ministry must be self-impressed by their stand on the sports-attendance issue. But finally, the system has lost out yet again due to yet another episode of ad-hoc policy making.

This has always been the glaring defect of our established systems. It lacked the power to remain unaffected and was often meted out with violations and amendments.

It is obvious that accepted rule-book shouldn’t be meddled with but rules with apparent flaws need to be rectified. One reason as to why rules like sports-attendance are regularly broken is simply because they were never effective enough to be implemented in the first place. In such realities, one possible solution would be to frame such rules that bar encroachment by human discretion and decision.

Irregularities in the framework of rules can be attributed to the makers of such rules who were clearly unequipped to know future competitive requirements.

Due to their inability to foresee futuristic happenings, it is now necessary to revise and update the rules according to the current requirements of the ones who fall under its ambit.

The 33% attendance to be adhered to by sports-quota applicants, who represent the country in international tournaments, comes across as next to impossible.

If we are to analyze Unmukt Chand’ case, it becomes clear that a youngster representing India in top-level cricket will seldom be able to fulfill the attendance criterion.

This recent example should enlighten the University rule-drafters to re-think on their rigid rules that strangulates an aspiring sportsperson, who realizes the equal significance of attaining a basic college-degree, keeping in mind the uncertainties of achieving a settled, assured life from playing any kind of sport due to it’s demanding schedule and ever-increasing competition.

Such exceptional cases requires some degree of amendments largely because of the enormous achievement he is credited with and the fact that it’s not often that you win a World Cup. The College Principal was being exhorted to flout the rules for this case, using the discretionary power he enjoys, but we must realize the helplessness of the college, regarding this issue.

The College is bound to follow the University directives, whatsoever, due to which it is irrelevant to blame the college authorities with allegations. The University should have made sure that the issue wasn’t blown out of proportion, and rather the issue should have been level-headedly dealt with by the functionaries, with due attention to the nation-wide sentiments regarding Unmukt’s plight.

During media discussions on the issue, Reverend Thampu proved his powerful communication skills once again, when he described his stance saying that “if cricket was played abiding rules, then why is it that rules of education are tampered with?”

However this issue is not really personal or confined to Unmukt alone, as it has the potential to affect the academic performance of all sports-quota students due to which it must have been handled with care and sensitivity.

There are many, like Unmukt, who dream to make it big, both on the educational front and sporting side. Delhi University and St. Stephens College should have also realized the future sports commitments of Unmukt Chand before enrolling him into its admission-list considering that the BCCI’S pre-fixed matches and tour programmes will in no way be altered.

The college hands him admission promising their full-fledged moral support for the budding talent hoping he would one day bring glory to himself and his college. But, unfortunately, St. Stephens College stance on this issue led to a feeling that the issue could have been more subtly handled.

However, now that all is well, the college plans to arrange a felicitation ceremony for their hero who brought laurels aplenty.

Well, what is the point in nurturing double-standards on such a hotly-discussed issue? Either the rules prevail or the rules are flouted. No one understands the sanctity of the very foundation of these rules due to which it’s careful and well-thought out implementation and formulation is the most underlying point in case so as to avoid any kind of discrepancy and human intervention on deliberate and selfish lines.

Interestingly, the violation of rules has two sides to it: one section tampers with the rules for their own vested interest while the other demands recognition of their presence and need rules tailor-made to suit their convenience. Sadly, both forms co-exist handsomely on a large scale in our corrupted country.

Even the anti-corruption movement which effectively garners nation-wide support doesn’t realize the pitiable state of affairs of the parliamentarians who are forced to respect the existence of a rule-rich constitution. So, in a nutshell, without altering the existing rules to suit the changing requirements, none will find joy and contentment in this country: neither the authority-wielders’ nor the commoners.

For example, in the sports-quota attendance issue, the initial correction should be developing a powerful sports culture, giving it with equal significance as the academic ethos.

The affected colleges must squeeze in separate classes, tutorials and lectures for the sports-quota students who grind it out day in and day out on the grounds, under sweltering heat, which make it impossible for them to fulfill the required attendance record.

Setting a fixed-percentage of mandatory class-attendance should be undone with as the sporting-engagements of various sports-quota students varies across the nature of sport they play.

Holding separate university exams for this category of students, as and when they are relinquished of their playing-duties, seems a viable proposition.

Another seemingly arduous task is to identify between those who are serious about their academics and the rest. For example, Unmukt Chand is no mean-achiever in academics. The youngster had secured first-division in semester exams which is a distinguished feat considering his low attendance.

Therefore, it becomes necessary to flout the rules for the deserving while the non-serious ones can be overlooked with minimal scrutiny of norms. Finally, colleges should lend their emotional and moral support to every sports-aspirant which eventually becomes beneficial and influential for these future stars-in-the-making.

The Unmukt Chand episode gives hope that more sensible rules become implemented with little scope for intervention. Ultimately, rules, framed by humans, govern themselves. So isn’t it advisable to undo the rules, which have attracted sharp criticism rather than overlooking these errors, which we are so often accustomed in doing?
Posted by Seasonal Magazine at 8:50:00 PM