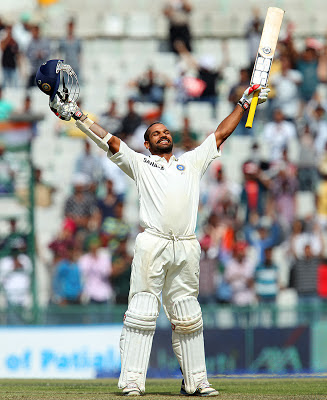 When Australia piled up a decent, though hard-earned first innings score of 403, the automatic observation was that the Aussies have given themselves a real chance of inflicting revenge on the Indians, considering that there are only two more playing days remaining in this test match thanks to the first-day washout. Moreover, the realization of not having to face a counter-attack from the blade of Virender Sehwag, who has on many occasions single-handedly engineered India to winning positions from situations of slim prospects, surely would have boosted their morale when they walked out to the field itching to have a go at India’s new-found opening pair of 15 tests-old Murali Vijay and debutant Shikhar Dhawan.

The Aussies went in for the kill, but the young duo started proceedings cautiously. On encountering a tense albeit jovial run-out appeal at the bowlers end without having faced a ball, Shikhar Dhawan's determined psyche, for a few seconds, might have probably taken a walk down memory lane during his debut ODI match where he was dismissed for a second ball duck. Picked in place of an out-of-touch Sehwag, the Delhi lad knew that this would be one of the few chances at his disposal, with the openers slot up for grabs and with competition brewing steadily; Dhawan had to make a sound impact. Being the well-known provocateurs that they are, Australia tried to unsettle Dhawan from the very beginning.

But Dhawan gave a “mouthful” reply by presenting the full face of the bat in the very first ball that he had faced. Little did the Aussies imagine that they would witness the emergence of a Sehwag-like tormentor. And then the unprecedented onslaught erupted. All hell broke loose when Dhawan caressed a flurry of boundaries evidently underlying his intent. At the end of the days play, Dhawan perches comfortably at 185, unflustered and unconquered, the innings studded with 33 hits to the fence and 2 towering sixes over it.

Shikhar Dhawan has thus passed his preliminary test in flying colors, giving India every chance of producing a positive result in the next 2 days and virtually depreciating the mighty revival effort of the Aussie lower-order batsmen.

But what should interest stern analysts are not the milestones he has accumulated en route to this epic knock, but the very inclusion of him in the squad. Shikhar Dhawan is a fitting beneficiary of the intense toils a domestic cricketer goes through in the Ranji circuit. He amassed 833 runs including four first-class centuries during the just concluded Ranji Trophy season 2012-2013, thereby earning a deserving call-up.

Like his contemporaries, Dhawan had to wait for his much awaited Test match debut during the period when the Sehwag-Gambhir combo were at their peak, despite noteworthy performances in the domestic seasons. The lasting impression created by the now-ousted openers meant that even a string of abysmal performances wasn't enough to oust them, until they defeat themselves by squandering even such extended opportunities.

Both Sehwag and Gambhir are now hoping to claw their way back into the team after enjoying undeserving exemptions. But let us not equate the fall of India’s successful opening pair with the ascension of the current duo, otherwise the likes of Amol Muzumdar , who accumulated an unbeatable Ranji batting record until recently eclipsed by Wasim Jaffer, would certainly have donned the test cap if stats were to be the yardstick for selection. But the unfortunate reality was that Muzumdar was in his prime during the era of an ever- growing triumphalism of India’s famed Middle-order comprising of Sachin Tendulkar, Saurav Ganguly, Rahul Dravid and VVS Laxman.

It is here that the selection committee comes into the picture. The Sandip Patel-led panel has assiduously gone about their vocation by making some difficult choices including the axing of Zaheer Khan and at the same time recognizing the achievements of the handful domestic performers, who without having to bang on the doors of the committee has received invitations calling for their drafting into the squad, in the literal sense. The selection of Ravindra Jadeja, Chetashwara Pujara, Ajinkya Rahane, Murali Vijay, Shikhar Dhawan and Bhuvanesh Kumar has only reposed faith in the domestic cricket system in the eyes of youngsters, who nowadays gleefully eye an IPL cap as opposed to going through the rigours of the Ranji drudgery.

The recent performances of the aforementioned talents teach aspiring cricketers a very important lesson that there is no easy path to success, even if an IPL appearance may enable them to absorb fame, which is although an unsustainable glory. The selectors have send out a roaring pronouncement that non-performers, however massive their past reputation, cannot savor an ignoble immunity nor can they expect a lengthened abatement.

The retirements of Rahul Dravid and VVS Laxman were inevitable; although it appears synonymous with the drafting of Pujara and Kohli. The current crop of selectors abides by a Darwinian style to their selection approach signaling the growing relevance of Ranji trophy performances. Irrespective of whether Shikhar Dhawan went on to score a ton or not, whether he sought Sehwag’s blessings before this innings or not, the heartwarming moral of the story is a refreshing and rejuvenating change of mindset.
Posted by Seasonal Magazine at 7:54:00 PM
Labels: Cricket