Why Dhoni isn't Truly Successful Yet 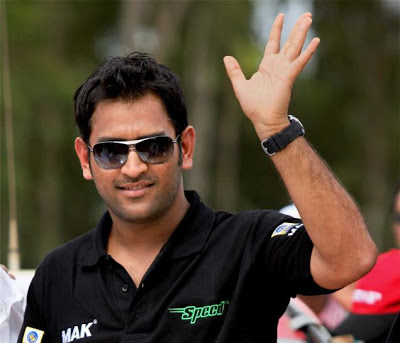 
After breaking Saurav Ganguly's record, Dhoni is again hogging cricketing limelight. But allegations of his divisive style are also gathering storm. While the likes of Gavaskar was quick to point out that there has indeed been a positive change in Dhoni's captaincy style, Ganguly was point-blank in hinting that Dhoni's hand was behind Virender Sehwag's ouster. While the former captain has since then back-tracked on his allegation a bit, Dhoni continues to garner admiration from overseas opponents. The latest was from Moisés Henriques who feels that India is lucky to have the experience of Dhoni.

The captain himself has gone on record admitting that, one starts questioning oneself when the losing streak was continuing.

Dhoni had eroded into a figure of unworthiness after back-to-back series losses beyond the subcontinent. He had lost the support of the millions who venerated him. He was impoverished technically resulting from an unorthodox approach. He was marred by press-conference controversies and verbal duals with senior members of the team. So much so that, the last 12-15 months can be easily adjudged as the most unsettling period ever witnessed by Indian cricket in the post-Azharuddin era.

Mahendra Singh Dhoni has seen it all. His ups and downs are household discourse, he being an iconic celebrity.

But like all the other amazing revival stories of sporting personalities across the globe, even though few, Dhoni’s resurgence indicate his hunger to make amends. He has resurrected yet again from the tomb of forsakenness. Dhoni has reached a milestone which will surely take some time beating. The unheralded captain of Indian cricket has surpassed Saurav Ganguly's record of most test victories by skippering his nation in 45 matches, emerging victorious on 22 occasions.

And Indians, by nature, rely heavily on statistical figures be it the GDP estimation or CAG reports, thus eluding the possibility of revealing what these numbers hide. Statistically, Dhoni finds himself in the record books. However it is reasonable enough to question the reliability of these numbers in revealing the actual merits of that milestone. We need to assess why such resurrections are basically a numbers game.

Firstly, Dhoni has benefited immensely from his predecessors so much so that any credit to him should be unequivocally distributed to the erstwhile captains. Dhoni has inherited talented colleagues - identified and nurtured by Ganguly - who have played a critical role in those 22 victories. A nation’s cricketing journey is a long-drawn process and so is the result. The vision and hard work of each individual and their performances have profited Dhoni, who is solely the current recipient of the baton in this unending relay race. This cricketing cycle is continuous, of which Dhoni is only the current anchor.

His dedicated implements have ploughed the field laboriously and Dhoni has overseen this labour watchfully. His supervisory role is laudable, and that’s where his quality lies.

Secondly, a captain is essentially a motivator, not a credit-taker. Dhoni has displayed outstanding leadership qualities in terms of his tactical ploys and rallying-calls, but success isn’t spelt wholly on the basis of formulation of plans. These same plans might end up being utter blunders on another given day. The challenge for Dhoni is to constantly remind himself that mere arithmetical efficacy isn’t a sound reflection of a team's competence. Dhoni should aim at building a proficient team that can serve future needs due to which he should take a tougher stand regarding selection of seniors.

These 22 victories might have actualized even without Dhoni at the helm and that is where Dhoni, the implementor, comes to the fore. His batting brilliance - or flimsiness - stands between India’s wins and losses. A captain’s contribution to the scorecard is as important as his role of assigning field placements and initiating bowling changes. Dhoni needs to fine-tune his batting to excel on foreign pitches. Once again, scoring a century in Australia or South Africa is just half the job done. Developing a methodology to play in different types of 22-yard strips effectively is the only route towards sustained success.

Finally, India has tasted very little success on foreign tours barring the series win in New Zealand. The manner in which India succumbed to these defeats showed the inefficiency of the batsmen to accumulate runs on the board which eventually pressurized the bowlers to raise their stocks. The test rankings also do not take into specific account on the destination which a nation tours, due to which crushing victories against minnows earns quick ratings.

The upcoming tour to South Africa will be a test of Dhoni’s leadership and patience and his batting progress will be closely monitored. After all, a leader is any individual who contributes to the team in his own capacity too.

So far, Dhoni has only united the individual capacities into a channelized effort aimed at the welfare of his team. One shouldn’t be swayed by statistician’s numbers alone. There is a lot that a number can conceal.
Posted by Seasonal Magazine at 12:13:00 PM
Labels: Cricket