Maoism - Is it Really Arundhati's Romance That Jairam Ramesh Hates? 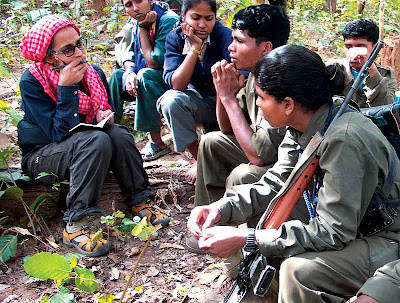 
“Maoist-Naxals are terrorists. They resist developmental activities in rural areas initiated by democratically elected bodies; be it the panchayat or gram sabhas or the ruling party. They advocate tribal warfare, not welfare.” Jairam Ramesh, Union Minister for Rural Development, didn’t mince words when asked to remark on the recent bloodshed caused by the naxals, in which top Congress leaders and security officers lost their lives after being brutally massacred in a well-planned ambush. He swore that all possible measures will be taken to curb the Naxal menace, which has severely dented the domestic security in the Red Corridor regions.

The Naxals are ideologically anarchistic which assumes the form of armed struggle for accomplishment of economic development and liberation from oppressive rule. They have always adhered to a hardliner stance, giving little room for diplomatic dialogues and political engagement. Therefore, in light of the recent events, the Minister's comments are indeed void of the usual Congress-BJP blame game, even though he suggested that tackling the Maoist insurgency is the responsibility of the respective state governments. While it has been overwhelmingly accepted that such kind of internal terror needs to be countered collectively, the measures in place as of now seem to suggest that the burden is entirely of the state policing units.

The biggest setback for a peaceful agreement is their continued refusal to organize themselves into political entities and contest in democratic elections. They have repeatedly claimed to have received support from the tribal population to carry out their activities. If this is to be believed, the Maoists possess the impetus to fight in the elections, being already in an advantageous position. Jairam Ramesh believes that the terror outfit should take a leaf from Arvind Kejriwal by challenging the government through election face-offs and winning democratic support.

There is a need for a long-term solution to tackle the Maoist insurgency by a holistic approach. While the Maoists have taken to arms in the name of the welfare of the adivasis, there is too little to substantiate that their recent attacks were directed towards the liberation of tribal population from social and legal injustice as they have stated through a video-release that the prime aim was to target the perpetrators of the Salwa Judum (an anti-Naxalite movement spearheaded by slain Congress leader, Mahendra Karma) atrocities. The latest developments prove beyond doubt that the Maoist focus has been on toppling the government in the guise of tribal benevolence.

The Salwa Judum movement, however, involved the active participation of both tribals and trained police forces, which was eventually scrapped by the Supreme Court owing to its inhumane conduct and the very idea of civilians (especially the youth) being trained to handle guns and grenades.

Does the Maoists always don the role of the villain while the state plays the role of the protagonist, who will eventually prevail over the ‘bad guys’? If Indian movie scripts are the standard of assessment, then the climax is pretty much hero-oriented, giving little detail to the historical context of the villainous acts of the antihero.

The ruling governments in Chhattisgarh, over the past 13 years since its recognition as an Indian state, have largely adopted an exploitative policy, capitalizing on the mineral-rich areas. The illegal seizure of forest lands for commercial expansion has deprived the tribal people of their source of livelihood. Due to the presence of large forest belts in the states of Chhattisgarh, Jharkhand, Orissa, Andhra Pradesh etc, the governments realized the prospect of clearing these lands for developmental projects as a tool for appeasing the electorate. But it is the tribal populace which has been gravely affected by the ‘Doctrine of pre-eminent domain’ whereby the state enjoys automatic and unilateral access to land and resources. This has been cited by renowned columnist Vinod Sharma as the "major reason for spread of Left Wing Terrorism (LWT) in India."

The government has failed on two fronts, barring the security lapses. The mining policy has accounted for large scale erosion of the topographical splendor and restricted access of the forest-dwellers to these areas for gathering food resources. The government should focus on implementing an environment-friendly mining mechanism, which would meet the requirements of the raw-materials industry and at the same time leave the essential resource-base untouched and unaffected by illegal encroachments. The Mines and Minerals Development and Regulation (MMDR) Act is pending approval in the assembly.

Another area where the government has fared poorly is on the recognition of tribal rights through the fair execution of the Enforcement of Forest Rights Act, 2006, which acknowledges the tribal communities’ first right over forest land. There is clinching evidence to prove the denial of land deeds to rightful claimants belonging to the tribal communities. Thus before the government envisages on the gallant proposal to implement the Integrated Action Plan (IAP), it must look into the aforementioned legislations which require an unprejudiced and righteous application.

The Maoists are steadily taking advantage of the governments’ failure to accommodate tribal interests. Therefore, the support of the tribal population is crucial for the government’s political existence as well as for the success of the counter-terrorism strategy. Deploying more troops in Maoist-dominated zones will only further incite violence from their side. The Maoists enjoy an upper-hand geographically in these regions and this can be effectively tackled by strict monitoring by the existing forces, which need to be properly armed with ammunition and weaponry.

All forms of tangible developmental structuring is facing stiff backlash from the Maoists. Thus it needs to be reiterated that government should improve the living conditions of the tribal populace by sheltering their long-held beliefs and practices and to avoid serving the interests of foreign associates itching to drive in international capital. Sources have suggested that the ‘domain doctrine’ at the government’s behest has increasingly benefited large mining companies at the cost of tribal prosperity.

Communities have been relocated hastily to provide for industrial space to these MNC’s, which in turn has negatively impacted the forest environment. The excessive exploitation of the voiceless tribal population is being facilitated by a lack of grievance redressal system and dispossession of resources, which has significantly highlighted the absence of equitable justice. There have been cases where the forest officials conspired with the timber mafia to extract the vegetative cover of these vast tracts of land.

India cannot wait until Minister for Home Affairs, Sushil Kumar Shinde, returns from holidaying in the USA. The Law ministry and the Home minister of the state need to make the first intelligent move of considering the problems faced by the tribal population, which is definitely not logistical development, but by ensuring that they gain their traditional access to economic resources, some of which are venerated. The government must act fast if it wants to prevent the emergence of tribal insurgents in Central India, similar to the Naga insurgents in the North-East, who off late remain subdued owing to an ease in relations with the government after the latter’s concerted effort to realize their demands.

Arundhati Roy, who was recently criticized by Jairam Ramesh for making attempts at trying to ‘romanticize’ Maoist rebellion, in a detailed report written in 2010 titled ‘Walking with the comrades’ voiced her inclination towards the justification of Maoist insurrections: “This legacy of rebellion has left behind a furious people who have been deliberately isolated and marginalized by the Indian government. The Indian Constitution, the moral underpinning of Indian democracy, was adopted by Parliament in 1950. It was a tragic day for tribal people. The Constitution ratified colonial policy and made the State custodian of tribal homelands. Overnight, it turned the entire tribal population into squatters on their own land. It denied them their traditional rights to forest produce; it criminalized a whole way of life. In exchange for the right to vote, it snatched away their right to livelihood and dignity.”
Posted by Seasonal Magazine at 7:00:00 PM
Labels: Politics