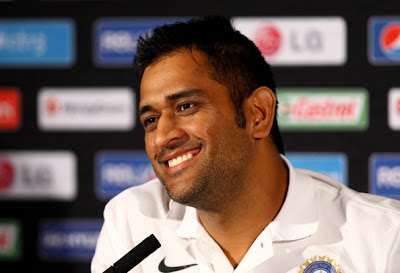 
Silence is a virtue. At least that is what we were taught or made to believe back in school. It is the underlying essence of discipline and character formation. But, even the concept of silence entails many versions. If a teacher poses a question and you are unaware of the correct answer, you tend to keep silent. On the arrival of a chief guest for a school function, students are ordered to maintain discipline, in other words, silence. These two scenarios reflect the different forms of silence. In the former, the student chooses to remain silent (or else come up with an excuse) while in the latter, students are gagged or coerced into maintaining silence. While one is a voluntary and conscious action, the other is an unquestionable instruction to be followed. However, with regard to training students on responding, has the school system failed to teach us the virtue of speaking when we are supposed to speak?

Dhoni’s recent mime antics during press conferences have seriously raised a question or two. Is remaining silent an act of following authorized orders or sheer escapism from reality to conceal the truth? The Indian captain has been criticized heavily for having indulged in a clear case of ‘conflict of interest’ by virtue of holding 15% stake in a sports-management firm which administers his fellow teammates like Ravindra Jadeja, Suresh Raina , & Pragyan Ojha, to name a few. The serious objection to the stake-holding claim is that Dhoni might have misused his captaincy in favouring the aforementioned players in team selection, which evidently indicates an element of partiality. The media and cricketing fraternity are already miffed with Dhoni for having remained silent throughout the IPL spot-fixing episode, but in a case such as this which requires clarification on his own alleged involvement, he has chosen to keep mum. Or are we assumed to believe that he hasn’t been gagged neither by his boss nor wife to zip his mouth? Dhoni has silenced his critics, whenever his bat does the talking. But here, he holds back his own free will.

A man known to take straightforward questions, Dhoni’s rather charming silence when asked controversial queries have hurt the belief and trust of cricket fans. Unlike in his batting, in which he responds to uncomfortable deliveries with a brave face and a straight bat, Dhoni prefers to dodge troubling questions, which he may actually find harmless if properly ‘played’. People like the stubborn N Srinivasan, foxy Rajiv Shukla, and nebulous Dhoni use their silence-license to evade distressing questions at a time when their vocal chords need to be actively in action. Dhoni’s feeble excuse for having refrained from  elaborating on these issues (he did say, in one of the media sessions, that there would always be a handful of mentally-weak sportspersons in every sports setup), is to focus on the preparation for the ICC Champions Trophy that began today. Now, that is a lame defence from a man who rarely defends a cricket-ball.

Maybe Dhoni felt that addressing the media in such dubious light, might be a tricky affair. Even then, he could have conveniently issued a press statement, straightening out his conscience, by clarifying his stand on the allegation or at least deny claims of his involvement. The student who is asked a question by his teacher doesn’t enjoy the kind of immunity Dhoni possess. Dhoni knows the kind of questions that he will be asked and even knows the answers to them, but fancies playing dummy to the television viewers.

The BCCI maintains, however, that the skipper or anyone addressing the media is never gagged, but should conduct themselves within the guidelines set in the constitution and contractual agreement. Sunil Gavaskar burst out at his detractors when a similar charge of blindly following boss’ order was levied on the commentators who too are salaried employees of the BCCI. The former India batsman says that nobody’s freedom of speech is curbed and it is entirely the individual’s prerogative to respond or not respond to media queries. Well, in that case, why does the Indian skipper, who otherwise has an opinion on almost every topic, choose to remain mute this time?

Ask a layman and he would say, that keeping quiet is an aristocratic style. Does it link with the position they are in? Whatsoever the case, it has surely become fashionable. From Manmohan Singh to Srinivasan, the bandwagon keeps getting huge. Avoiding the media is increasingly being considered good for ones health. Inside Parliament, ministers puts across their views in a chaotic and zealous style but while addressing the media they tighten their screws and expresses their message in a typical rhetorical tongue. Thus, the public is left grappling with questions. Silence can never be misinterpreted, especially when exercised by people in power. It is simply an act of face-saving arrogance, with full-knowledge of their actions. Not like the student who hasn’t done his homework. The know-it-all class chooses to do so. Maybe, silence isn’t a virtue, after all.