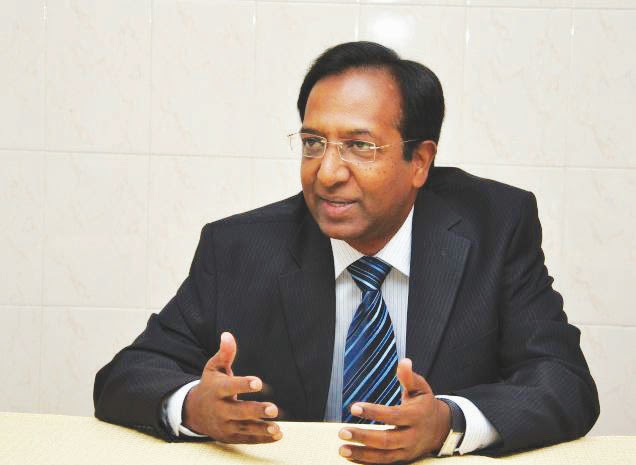 It has been more than 3 years since K Venkataraman took over as MD & CEO of Karur Vysya Bank. It has been in no way an easy 3 years. The entire banking industry in India was rattled during this period due to slow economic growth, high inflation, high interests, and the resultant surge in NPAs. Still, this ex-SBI professional could grow KVB’s topline by 2.28 times during this period. Net profit has grown by a maximum of 32% during this same period. No wonder then that Venkataraman has been re-appointed as MD & CEO for a further three years, that is until May 2017. The KVB stock, which has been historically one of India’s smartest wealth creators, has surged by nearly 80% during the year-to-date. KVB has concluded a successful QIP issue recently, which enables it to face higher credit growth in the future. K Venkataraman is cautiously confident of the future for KVB as well as Indian banking industry, with his main concern being the suppression of demand due to the current high-interest regime.  He hopes that as and when Government’s strategies to fight food inflation succeeds, RBI will be in a position to cut rates, which will usher in growth once again.

Your QIP had been an instant success. What prompted you for it, is it for shoring up your capital as per the compliance norms, or is it intended mainly for business expansion? What is the extent of dilution on equity?

We were not in any emergency kind of situation to shore up our capital. We took the sanction for this fund-raising around an year back, and were looking out for an appropriate window of opportunity. But it didn’t arrive last year, and we withheld the QIP as the extent of dilution would have been higher then, and besides we were in no urgency. Even now, there was no urgency. But when the capital markets started turning around recently, we got this window of opportunity, and promptly went for it. KVB was one of the first banks to complete the QIP in this season, and we moved fast because we wanted to do it before the market gets overcrowded with offerings from peer banks due to the new Basel norms. Because, only a select segment of investors are looking out for QIPs in the BFSI sector. The equity dilution has also been limited, around 11%. We expect loan growth to pick up, going forward, and this QIP has enabled us to address it without going to the brim.

Where does your battle on NPAs stand now? Do you think the worst is behind KVB now?

The NPA battle is an ongoing one, it never really gets over in a sense. But as far as KVB is concerned, most of the NPAs haven’t been deliberate or due to gross mismanagement by our customers. The depressed demand for their products, due to the peculiar economic environment prevailing in the country, upset the calculations of many of our SME clients, and while many of them tried to reduce the leverage by selling of their realty assets, that too didn’t work out fully due to a sluggish realty market. So, the NPA battle is an ongoing one at KVB, like in most other banks. But having said that, I definitely think that the worst is behind KVB now. We expect that slippages during this year will be much lower than in last year.

If the worst is behind KVB, what according to you, has been the bank’s strengths in battling the bad loans problem?

We have basically followed a two-pronged strategy that proved very successful. Firstly, ever since the first hints of assets getting weakened, we had tightened up our appraisals and due diligence regarding sanctions and disbursals. Marketing teams were made fully independent of the appraisal teams. Secondly, we had strengthened our recovery mechanisms. Earlier, many of our branches were not fully equipped to handle recoveries. They would think that two or three months of non-repayment would get sorted out eventually. But banking is never done that way. How can a stressed customer who can’t pay one month’s interest be expected to pay three months dues? So, recovery processes are essential in banking, and that is also one front where we have improved much.

How do you view the Jan Dhan program and the push for financial inclusion? How is KVB participating in this initiative?

I think that this is a great initiative from the part of PM and the new government. Earlier, if we needed more deposits to be mobilized, the marketing was entirely up to us. But Jan Dhan has made a revolutionary change. The same kind of customers who had earlier declined to start accounts, are now queuing up to open their accounts, only because the Government has promised them some incentives like insurance, and also because the awareness has been created that subsidy payouts will be only through such accounts in the future. I think, as such, Jan Dhan is a brilliant move. There are some detractors in the banking industry itself, who argue about the cost of starting and maintaining Jan Dhan accounts, but I don’t think it is a big deal for the banks. Another view is that these will be very low-value accounts, but my counter is that many of them won’t remain that way. These customers too will come up in life as the nation grows and their children study and get employed, and besides that, as an Indian bank I think it is our duty to assist the economically disadvantaged. If such a customer who is regular with his deposit account and transactions, however small they might be, comes to us for a loan to maybe start a small business, we would be more inclined to sanction it. KVB is fully participating with Jan Dhan, and we have already achieved nearly 90% of some targets set for us.

SBI has recently reduced the deposit rates and more banks may be following that route. Are the Indian interest rates set to soften sooner than expected?

KVB has, in fact, reduced the deposit rate by a similar percentage even before SBI did it. But we did that not in anticipation of the softening in RBI rates or the lending rates, but because there was very little that we could do with extra deposits. Credit still hasn’t picked up significantly. From RBI’s point of view, which is basically an inflation-fighting view, much more needs to be done on the fiscal side for RBI to start easing rates. But the flipside is that the high interest-regime works by suppressing demand, and that is not good for the economy as a whole in the long run. Even the NPA problem can aggravate if the demand is suppressed for much longer. Hopefully, I feel that the new Government is acting forcefully to contain food inflation by threatening drastic action against hoarders, and this as well as some fiscal measures initiated by the Government can limit food inflation, going forward. And once, food inflation is contained, RBI will get more room to cut rates, and I expect rates to soften from the fourth quarter onward.

Your Return on Assets stood at 0.92%. Are you planning for an up-tick in this figure in the short-term or in the longer term?

Yes, definitely, we want our RoA to improve. If we could, we would like to achieve our historically best RoA like 1.25% to 1.35%. One reason why the RoA is depressed is that KVB now chases higher quality assets, in which the returns will be somewhat lower. We were forced to take this path, due to the NPA problem in the entire banking sector, due to the sluggish economy. In such an environment, quality or safety of the assets become paramount, and as and when the economy improves and the NPA situation improves, we expect to achieve a higher RoA.

How has been your initiatives to push alternate channels like ATMs, net banking, and mobile banking faring?

All these three alternate channels have been growing very rapidly at KVB. You may be surprised to know that KVB has the fourth largest ATM network among all private sector banks, that is, after the big-three of the industry. But having said that, we are not very bullish anymore on growing the ATM deployments any further. Because, the ATM delivery model is truly at crossroads now, after many years of rapid growth. Cost consciousness has kicked in, and if the free model is eventually replaced by a paid model, we think that ATM delivery will be more costlier for customers than coming to the branch itself. As you know, there is a proposal to charge a fee for more than 3 transactions in other-bank ATMs and for more than 5 transactions in same-bank ATMs. So, we are closely watching the developments, like how the inter-bank fees will be charged, and like how newer models like white-label ATMs would evolve. But regarding the other two channels - net banking and mobile banking - we are very bullish. We are already sensing that our younger customers are eagerly embracing mobile banking, because they are well-versed with the technology, and they also know how to manage the risks. In fact, all these alternate channels - ATM, net, & mobile - are quite safe as long as the customer doesn’t reveal his password or PIN to anyone. The industry, however, needs to educate customers more on the fact that a bank will never ask a customer for his password or PIN. Online fraud in banking is happening in this way only, and not due to high-tech hacking.

From a mainly South based bank, is KVB planning for a pan-India expansion in the coming years?

We are definitely expanding across India, but with some preferences. We are biased towards expanding more in some regions like Karnataka, Andhra Pradesh, Kerala, Gujarat, & Maharashtra, apart from our home state of Tamilnadu. This is mainly because of the synergies that we find in comparison with our home state, like similar kind of MSME and mid-corporate clients.

Where does your NIM stand now, and are you confident of regaining lost space on this front?

For the last fiscal, it was 2.64% and for the June quarter it was 2.73%. In fact, NIM has been improving for the past three quarters, sequentially. We are definitely confident of regaining lost space here, as and when the economy improves.

According to you, what differentiates KVB from similar-sized peers in the private as well as public sector?

Our main strength is that we have a unique tradition, being a 98 year old bank. We have competed with all kinds of banks, in our history, and grown wonderfully during each phase. This is primarily because of KVB’s long-standing tradition of high ethical standards in business, as well as our very good customer service. Even before our customers confide their problems with us, if we can sense it, we reach out to help so that their business cycle is run efficiently. Because of this trait, customer loyalty is very high, with generations continuing to bank on KVB. We are not a corporate focused bank, but an MSME focused bank. In recent years we have also been growing our retail portfolio very rapidly.